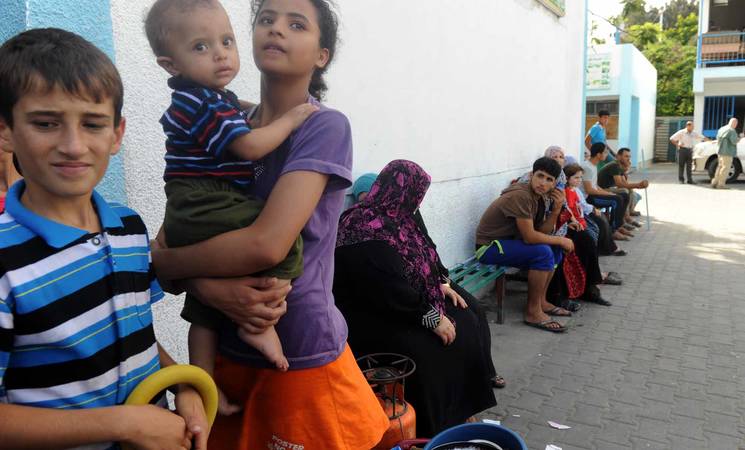 Due to the dramatic escalation in violence over the past few days and the massive assault on Gaza, UNRWA has declared an emergency in all five areas of the Gaza Strip. It is closely monitoring the situation and stands ready to mount an emergency response should that become necessary. The priority for the Agency has now shifted to emergency operations, providing assistance to those who have been displaced and sought shelter in UNRWA schools, while attempting to continue regular operations. Urgent funding needs persist and are increasing.

Past 24 hours: The impact of the ongoing conflict on civilians has today taken a significant turn. Thousands of people have been internally displaced as they escape airstrikes affecting their homes and neighbourhoods or respond to leaflets distributed by Israel telling them to leave their homes. Over the past 24 hours UNRWA opened a number of its schools as emergency shelters for Internally Displaced Persons (IDPs). As of 8.00am five shelters are open in Gaza, already utilised by 2,000 people. At the time of reporting this number was rising by the minute.

On 12 July, communities in the North, where the security situation is particularly precarious, received leaflets from the IDF asking them to leave their houses. Distraught families from Al Atatra Area (West Beit Lahia) evacuated to UNRWA schools in the Gaza Area, where they were provided with shelter. Some refugees report that this is the third time they have displaced to these schools in the past five years, sometimes to the very same classroom.

In Rafah, southern Gaza, seven families sought protection from a warning missile in a nearby neighbourhood. The situation also remains tense in Khan Younis, where there has been loss of life and injuries after several houses were destroyed, and 20 damaged as a result of airstrikes and other fire.

The toll on civilians was also tragically apparent when a rehabilition centre for people with disabilities was impacted by airstrikes. The Mabarrat Filistine Association in Bet Lahia, North Area, Gaza reported two deaths, both disabled female patients, and four injuries.

Public services continued to be hit hard over the past 24 hours. An alarming development is the alleged targeting of Coastal Municipalities Water Utility (CMWU) operation teams.  The CMWU provides water and sanitation services to communities in the Gaza Strip.  Two team members were killed by airstrikes in al Bureij two days ago and this morning, two were reported to be directly targeted by an Israeli missile during their routine field operation, conducted in cooperation with the Gaza Electricity Distribution Company (GEDCO) team in Rafah. One of the two operators sustained severe head injuries and is in critical condition.

As at 13 July, the CMWU has taken measures to protect its staff - including municipal employees - from further danger by suspending all its field operations. This includes all routine operations and maintenance work in water and wastewater facilities across all five Areas of the Gaza Strip.

If operations are suspended for any length of time, the CMWU fears it will expose Palestinians in Gaza to health and environmental disasters in addition to the current vulnerable conditions people are experiencing as a result of the escalation of conflict.

The water crisis is an existential threat to the Gaza Strip as a livable place, even without the current conflict. The Gaza aquifier could become unusable as early as 2016, with the damage irreversible by 2020. Currently, over 90% of the water extracted from the Gaza aquifer is unsafe for human consumption, and only 15 - 25 per cent of households receive running water every day.  75-90 per cent of Gazans already depend upon private water vendors for their drinking water supplies. In addition, some 90 million liters of untreated and partially treated sewage are dumped into the sea off the Gaza coast each day. Ceasing of CMWU operations only exacerbates this dire situation.

Whilst electricity lines that were down in Gaza have been reportedly repaired, electricity in the North Area is still interrupted as a result of additional lines being struck in recent days.

Over the past 24 hours, 45 deaths and 131 injuries have been reported. Amongst the dead are seven woman and five children – all boys. At least 32 children have been killed since Tuesday, 8 July.

Reportedly, 235 missiles were fired by Israel to the Gaza Strip. 166 rockets and were fired towards Israel. It was reported that the Israeli navy fired 76 shells at targets in Gaza, and 39 houses in Gaza were bombarded by Israel. IDF positioned at the border, reportedly fired 186 tank shells.

There were 45 deaths and 131 injuries reported. This takes the reported total death toll since Tuesday, to 166, with more than 1,100 injured. Reports indicate that at least 32 children have been killed over this time period.

A total of 49 UNRWA installations have been damaged since 1 June, 2014.

In the past 24 hours, nine UNRWA installations were damaged. All of these were schools, in Gaza, Middle, North and Rafah Areas.

Rafah crossing was closed, except for the wounded.
Erez was closed.
Kerem Shalom was closed.