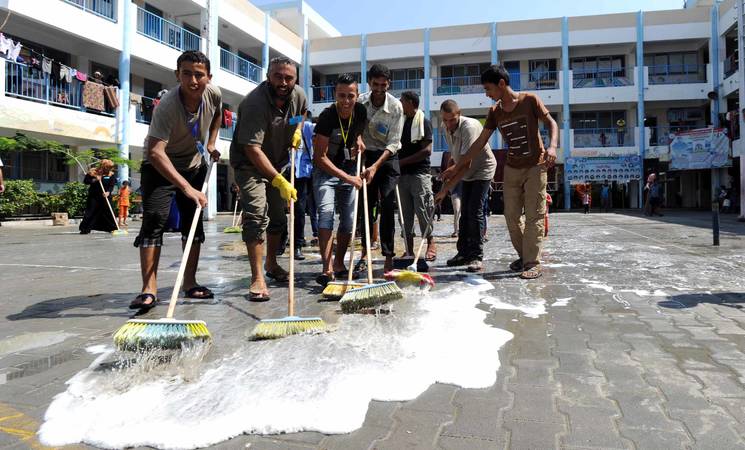 In coordination with the Ministry of Education, the 2014/15 school year will start on 14 September. UNRWA expects some 241,000 students in 252 schools, which will be run on double-shift basis, with one school of students and teachers in the morning and another school in the afternoon. With 36 school buildings still serving as shelters, class formation and overall planning for the new school years is a major challenge. Quality education and psychosocial support to students in UNRWA schools will be a major challenge in the overcrowded classrooms, with both teachers and students being affected by the experiences of the war.

The UNRWA Beach Camp Elementary Boys School C continues to provide a temporary home to some 900 displaced. Most of them come from Beit Hanoun and Gaza City, including from Shuja’iyya, areas which were subject to heavy shelling during the course of the 50 day war.

Salwa Hamada and her family is one of the many who took refuge in mid-July 2014 after their home was severely damaged when a neighboring house was hit. The 51 year old mother said that all she wants is to rebuild her home and to bring up her children in peace and security. Ms. Hamada’s 11 year old son, Izziddin Hamada, said: “I want a long ceasefire to return to school. I want the blockade to end so that I can travel abroad. I want to study medicine in the future so that I can treat my sick mother.”

Amal Al Omari is 13 years old and would be studying in the 7th grade in one of UNRWA’s schools. Instead, she continues living in UNRWA’s Beach Camp Elementary Boys School C following the complete destruction of her family home in Gaza City where she used to live with her mother and four siblings. She said: “My father passed away last year. He had cancer. Before he passed away, he bought us a lovely house. I want to have our house rebuilt. I want peace. I want the borders to open so that my mother can travel abroad to undergo her eye surgery and I can continue education. After finishing high school, I would like to study Journalism.”

Data on damage to UNRWA installations is based on preliminary information and subject to change based on further verification. UNRWA estimates that 111 installations have been damaged since 8 July 2014.

Ask the Director: Interview with the Director of UNRWA Affairs in Gaza, Matthias Schmale
To enjoy life is to be in good health
Mercy USA supports Palestine refugee families in Gaza with emergency food aid
The Rahmatan Lil Alamin Foundation and the People of Singapore Raise US$ 3.18 Million for Palestine Refugees
oPt emergency appeal - progress report
gaza’s “great march of return”, one year on
Occupied Palestinian Territory Emergency Appeal 2019