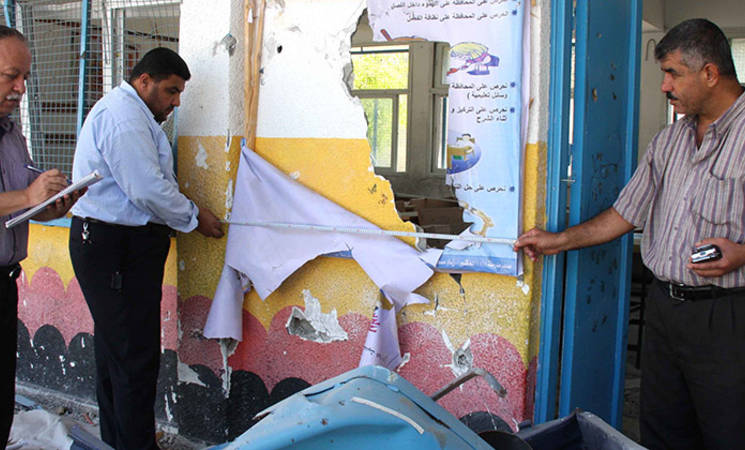 Past 24 hours: Thirteen days after the announcement of the ceasefire, relative calm prevails in Gaza. On the morning of 8 September, the Israeli navy opened fire towards Palestinian boats, forcing them ashore. Whilst calm for calm continues between Gaza and Israel, civil unrest is a significant threat, and it is feared that anger might also turn against UNRWA and its staff. Displaced in the North are refusing to leave specific UNRWA schools and move to another shelter, unless the Agency agrees to an immediate comprehensive financial assistance package. The consolidation process of UNRWA shelters is required so that buildings can be made available for Sunday’s planned start of the school year. In the Middle Area, UN vehicles were blocked and anti-UNRWA leaflets were distributed near a shelter. The National Consensus Government, formally in place since 2 June 2014, is yet to resume effective power. Key issues remain unsolved, for example payments to former de facto government staff who continue reporting to work but have received no full salaries for over one year, and no salaries since March 2014.

While the current ceasefire has brought relief to children who have endured more than seven weeks of intense violence and some the destruction of their homes, it will take time for students to experience anything close to a normal school routine. UNRWA is thus facing a tremendous challenge to ensure that children are able to attend and focus while at school.

In order to provide children with the ongoing support they need, UNRWA has commenced training of its 7,800 school teachers in Gaza. Each teacher is receiving two days of training by counselors from the Agency’s Community Mental Health Programme (CMHP). Upon completion of the training, teachers will be better equipped to identify children that may be affected by post traumatic stress, will have learned to anticipate likely associated behaviours and will be in a better position to provide support to children through recreational activities. The training will also enable teachers to identify children who might require referral to psychosocial counselors.

UNRWA’s psychosocial interventions build on the support provided by the CMHP in it shelters during hostilities. One of the children enjoying the recreation and CMHP activities is 11 year old Khitam. She took refuge with her family in an UNRWA school following the shelling of her house, which caused injuries to her brother’s head and eye. Khitam says she is haunted by nightmares and feels frightened. She plays in the school every day, where she and her peers are provided with support. “I long to return to live in my home in peace and security, return to my school to play with my friends, I yearn to play with my toys which have been buried under the rubble of our home. I want to feel secure,” said Khitam.

The Agency recognizes that over the past two months, parents have endured tremendous stress and fear for the safety of their children. To this end, the Agency seeks to alleviate parents’ every day pressures and assist in helping children return to school, meet with their friends and transition slowly into traditional classroom learning.

Amal Al Gharabli is one such parent. She is a 40 year old single parent of four children. Amal and her family were forced to leave their home in Shuja'iyya, Eastern Gaza, following heavy shelling, taking refuge in an UNRWA school. Amal returned home during a humanitarian ceasefire, in order to collect items for her disabled parents. Upon arriving, she found her home was severely damaged and largely burned down. Amal said, “I do not know how to continue life as we are living in an UNRWA shelter and with the help of food and non-food assistance. The psychosocial support in the shelter is very beneficial and it helped us to cope with the isolation of our children from their usual community.”

The counseling and support provided to teachers, students and parents is set to continue throughout the school year. This includes activities for learning and recovery, diversified teaching styles, opportunities to work in groups, child friendly discipline and peer support for teachers and other educationalists.

Data on damage to UNRWA installations is based on preliminary information and subject to change based on further verification. UNRWA estimates that 111 installations have been damaged since 8 July 2014.

The revised flash appeal can be found here.