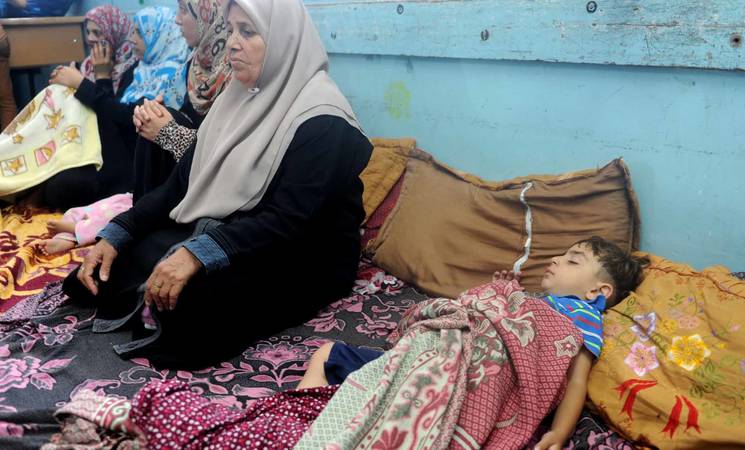 Due to the dramatic escalation in violence over the past few days and the massive assault on Gaza, UNRWA has declared an emergency in all five areas of the Gaza Strip. It is closely monitoring the situation and stands ready to mount an emergency response should that become necessary. The priority for the Agency has now shifted to emergency operations, providing assistance to those who have been displaced and sought shelter in UNRWA schools, while attempting to continue regular operations. Urgent funding needs persist and are increasing.

Past 24 hours: The impact of the ongoing conflict on civilians continues to be devastating for communities in the Gaza Strip. At the time of reporting 17,000 distraught people had fled their homes in Northern Gaza, to shelter in 20 UNRWA schools in Gaza City and the North Area. In addition, there were almost 300 people requesting temporary shelter in the Middle Area.

It is reported that in the North Area of Gaza, the IDF continues to send SMS phone messages requesting people to leave their houses to a safer place. Reportedly, the local mosques are asking communities not to relocate. This is a time of incredible uncertainty, turmoil and suffering for the women, men and children of Gaza.

UNRWA very much fears that preparations for a ground offensive will imminently lead to large-scale displacement from areas near the fence with Israel. History has shown that this would have enormous impact on Gazan civilians, including significant damage to shelters and infrastructure, in addition to displacement and massive disruption to the economy.

UNRWA’s preparedness levels are high but history shows that the organization can expect to shelter up to 50,000 displaced Gazans in its schools if a ground invasion occurs. Yet, the organisation holds NFI stock for less than 35,000, a legacy of scarce financial resources that did not allow UNRWA to replenish contingency supplies after the devastating flooding in December, 2013. As well as the essential non food item stocks now being provided, the displacement of Gazan families has resulted in the need to provide additional food assistance. UNRWA has an existing partnership with WFP to provide food, but there is an urgent need for more funding to complete the food basket in shelters.

Streets in the Gaza Strip remain empty and banks are still closed. On July 13 in the North Area, IDF shelling reportedly restricted the movement of people on the streets, and caused electricity cuts in a number of locations.

Reportedly, 294 missiles were fired by Israel to the Gaza Strip. 214 rockets and 30 mortars were fired towards Israel. The Israeli navy fired 200 shells at targets in Gaza, and it is reported that 55 houses in Gaza were bombarded by Israel. IDF positioned at the border fired 47 artillery and tank shells.

There were 9 deaths and 33 injuries reported. This takes the reported total death toll since Tuesday, to 174, with approximately 1,152 injured. Reports indicate that at least 32 children have been killed over this time period.

A total of 49 UNRWA installations have been damaged since 1 June, 2014.

In the past 24 hours, three UNRWA installations were damaged. All of these were schools, two in the Middle Area and one in Khan Younis.