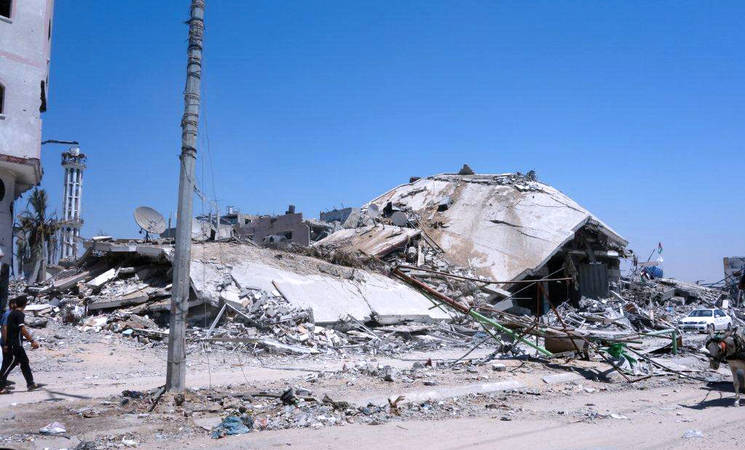 Gaza Situation Reports will now be issued by UNRWA on a weekly basis on Wednesdays. The next report will be issued on Wednesday 24th of September.

Operational Environment: The situation in Gaza remains tense. In addition to a projectile being fired towards Israel on 16 September, there have also been a number of incidents of Israeli Navy opening fire towards Palestinian fishing boats (on 15 and 17 September). Palestinians in Gaza continue to feel uncertain about the future, expressing concern about the unstable political and security environment and ongoing deterioration in the socioeconomic situation.

UNRWA staff members offer skills and service during the conflict

UNRWA driver Abdul Rahman Tawfiq Al Jalis is 43 years old, married and has eleven children between the ages 3 and 11. During the recent hostilities, he and his family were forced to evacuate their house in Shajaiya and take refuge in an UNRWA school in Al Zaitoun area. Despite his own challenging situation, Abdul dedicated himself to working long days as an ambulance driver for those displaced in UNRWA shelters that urgently needed his help.

Abdul started his 25-year career with UNRWA as a labourer within the Relief and Social Services Programme before commencing his current role as a driver of a personnel bus for a health centre in Khan Younis. In order to advance his career, Abdul attended first aid training courses at the health centre. As a result of his ability to provide first aid, Abdul acted as an ambulance driver during times of conflict. He has worked as an ambulance driver during the 2008/09 and 2012 conflicts, in addition to the 2014 escalation.
Generally, UNRWA operates three ambulances which can be driven by one of its nine drivers throughout the Gaza Strip. During emergencies, the Agency increases its ambulance operation to eight ambulances and 16 drivers, serving the displaced in UNRWA shelters.

One of the ambulance drivers assigned to the Gaza area during the recent hostilities was Abdul.  Abdul’s work required him to be on stand-by in Gaza’s operation room, for when an ambulance was required in one of the area’s 29 shelters. During this time, Abdul often stayed overnight at the operations centre since he ‘had no home to go to’. Looking back on the conflict, Abdul estimates he drove over 400 individuals to the hospital, including pregnant women who were close to delivery.

One of the most memorable cases that Abdul recalls is four year old Tamer, who was severely wounded by shrapnel. Tamer and his father had sought shelter in an UNRWA school close to the Islamic University in Gaza City, when the University was struck by shelling. Abdul says: “I managed to stop his bleeding resulting from shrapnel in his neck and then drove him to the hospital. Tamer spent two weeks in the hospital’s intensive care unit. Upon his release, his father thanked me for my efforts towards his child.”
Abdul faces a lot of difficulties when driving the ambulance during a conflict. In spite of these challenges, Abdul says he enjoys his work:  “I am glad to help refugees because they are my people.”

Since the announcement of the ceasefire, Abdul has returned to his regular job as a UNRWA driver of the Khan Younis health centre.

On the evening of 16 September, one projectile was fired towards Israel, in the first of such incidents since the start of the current ceasefire.

Data on damage to UNRWA installations is based on preliminary information and subject to change based on further verification. UNRWA estimates that 118 installations have been damaged since 8 July 2014.

The revised flash appeal can be downloaded here.