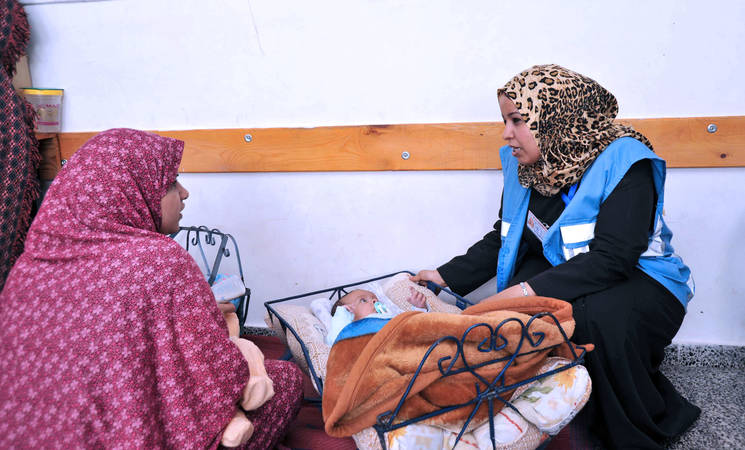 Operational environment: The atmosphere in Gaza is one of both frustration and eager anticipation, as families await tangible action after the recent recovery and reconstruction conference held in Cairo. The enormity of the task ahead is becoming clear. This was highlighted by UNRWA’s Commissioner General, Pierre Krähenbühl in a press release on 20 October: “Cairo saw important commitments made, which we welcome. On the ground we are confronted with high expectations by thousands of families in critical need. We therefore urge that pledges be rapidly transformed into actual contributions that will allow us to start the process of rebuilding.” Access for building materials remains critical, as does the lifting of the seven-year blockade. The people of Gaza need attention and support in this critical phase, in particular with the winter approaching. They also need a paradigm shift, with an end to aid dependency, an end to the restrictions on movement, trade and employment imposed by the blockade. UNRWA’s operational focus remains on Collective Centre management, “back to school” activities, shelter assessments, assistance to those with damaged or uninhabitable homes and regular support to Palestine refugees in Gaza. 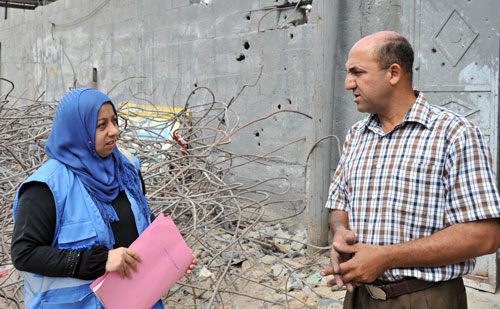 It was not too long ago that UNRWA Social Worker, Najwa Zaalan thought she might lose her home, in the midst of 50 days of conflict in Gaza. ”The house next to my home was impacted but fortunately and by a miracle my home escaped damage and my family survived,” she explained.

The current cease fire has held for almost two months, but Najwa quickly recalls her own circumstances during the war, and the way it affected her life at home. "All of us were exhausted physically and emotionally. I was terrified for my four children all the time, not knowing whether I will go home to them or not. To help my children cope, I used to prepare sweets for them whenever I could. They would always ask me when the war will stop. During any truce, they would again ask "is the war over?"

A Social Worker for the past eight years at UNRWA’s Relief and Social Services Program (RSSP), Najwa continued to work, despite the challenges for her family. Working twelve hour days, Najwa initially contributed through social interventions at Asma' Elementary Co-ed School, which was housing about 1,600 Internally Displaced Persons (IDPs) at the time. Najwa helped raise awareness on matters related to water and hygiene. “My job included providing hygiene awareness sessions for IDPs, helping modify hygiene practices and advising people of the best use of cleaning materials and water,” she said.

Like many other UNRWA Social Workers, Najwa’s duties shifted during the conflict and she was soon asked to assist with UNRWA and WFP’s exceptional food assistance distribution to about 121,600 families in Gaza.

When UNRWA commenced shelter assessments last month, Najwa was happy to shift her responsibilities a third time to that of a team leader, supervising three personnel in the north of Gaza. Their daily workload involved visiting the homes of 15-20 refugee families each, asking scripted questions and providing this information via paperwork to a centralized system. The data is then used to arrange damage assessment visits by UNRWA engineers, which determines the level and type of assistance packages that may or may not be available to families.

To help ensure a faster and more efficient assessment process, UNRWA did not require refugees to register for an assessment, as was the case after previous wars. "It was very useful and effective that UNRWA announced to people that they don't need to register,” explained Najwa. “It facilitated work and expedited the achievement of our tasks. People were also comfortable as they knew that they wouldn't be left behind. They felt UNRWA cared for them.”

200 Job Creation Program (JCP) social workers were recruited in addition to more than 120 fixed term RSSP staff, to ensure families were visited in a timely manner. Another 48 JCP data entry clerks were also hired by RSSP to upload the data received by the social workers when they returned from the field. Sixteen shelter focal points and five governorate coordinators were assigned to supervise the assessment process.

UNRWA estimates that around 80,000 refugee homes were impacted during the 50 day conflict. Almost all of these have now been visited by RSSP personnel. UNRWA encourages those refugee families with damaged homes who have not yet been visited by a social worker, to report to their nearest RSS office.

Najwa will soon return to her pre-war role as an acting supervisor within UNRWA’s Social Intervention Unit responsible for addressing social, psychological, educational and behavioural issues. Despite the many challenges, she is grateful to have been able to contribute to UNRWA’s emergency and early recovery activities.

"Knowing that I am serving my people is what made the entire ordeal bearable. To be in the field, and to help one's people and see their reaction is a reward all in itself,” said Najwa. “My work has always related to the humanitarian side of matters; it is better than any monetary reward.”

No major incidents were reported between 15 and 21 October.

The Agency has concluded assessments of its damaged UNRWA installations, with a total of 118. Repair work is ongoing and a redesign for one school and three other installations that need to be rebuilt is in progress.

UNRWA is seeking USD 1.6 billion for emergency relief, early recovery and reconstruction priorities in the Gaza Strip. More information can be found here.

The same information is available in Arabic here.