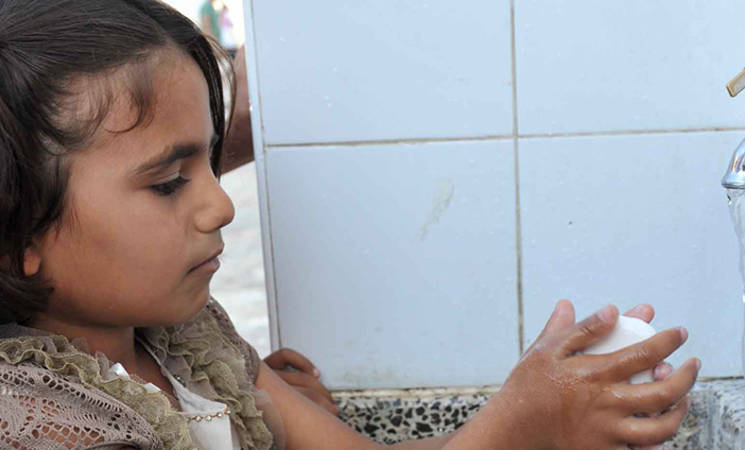 Operational environment: Whilst recovery and reconstruction of the Strip is essential at this time, families in Gaza still eagerly await updates regarding critical underlying issues such as a lifting or easing of the seven year Israeli-imposed blockade. UNRWA welcomed the cease fire on 26 August, which ended 50 days of unprecedented violence and destruction. However, without a political solution a new cycle of violence is perceived as being very likely. UNRWA’s operational focus over the past week was on Collective Centre management, vulnerability assessment follow ups, school activities, shelter assessments, assistance to those with damaged or uninhabitable homes and regular ongoing support to Palestine refugees in Gaza.

As a Project Coordinator at UNRWA’s Gender Initiative (GI), Najwa Lubbad’s passion for her job is obvious. “Working on women’s issues is the field I like to work in. I'm doing my best to improve women's conditions in Gaza and help them to overcome the challenges they face,” she said.

Najwa has worked on women’s issues and empowerment in the Gaza Strip for 12 years, the last 3.5 of which have been with UNRWA. The Agency introduced the Gender Initiative in 2008, designed to improve the capacity of women and girls to exercise freedom of choice, take advantage of opportunities for personal and professional development and to address inequality at all levels of social, economic and political life.

Embedded in a community development approach, the GI works through local stakeholders and builds the capacity of community based organizations (CBOs) as a means to ensure sustainability of the programs. The Initiative partners with about 62 CBOs across Gaza. More than 11,000 women have participated in activities in 2014.

Najwa is proud of her team and the work it does to develop, design and implement monitoring and evaluation of GI projects. “The GI team includes eleven staff members – seven females and four males. I believe that the team atmosphere is the key to many of our achievements,” Najwa said. “The team is well qualified, aware of their roles, very much cooperative and looking to achieve the success and progress of gender focused activities.”

Najwa’s GI campaign skills and experience, on projects such as domestic violence awareness campaigns, were put to good use when she joined the emergency water and hygiene team during the recent conflict in Gaza. Her role was to ensure that IDPs in UNRWA schools were aware of, and shared the responsibility for helping to promote clean shelters and prevent any major health issues, including scabies, lice and water related diseases.

“We succeeded to form IDP Committees responsible for the hygiene issues at the shelters and to provide awareness sessions on the importance of hygiene and how to avoid getting sick,” Najwa said.

Her personal experience of the war has helped Najwa to identify with beneficiaries who have undergone similar ordeals. “The emergency personally affected me in term of frustration and depression, living for long times under fire, seeing dead bodies, destroyed homes and people who were forced to evacuate their homes,” Najwa says.

“I can't describe the feeling when we were forced to evacuate our home late one evening. We didn’t know where to go, and were surrounded by people who were running and screaming. The most difficult time though, was when I saw my Mum who lost her son in the last war [2009], praying all the time for a cease fire and asking God to keep her children safe.”

Najwa did stay safe throughout the conflict and has now returned to her regular day job. The water and hygiene committees’ work continues whilst 18 UNRWA schools remain open as Collective Centres, housing more than 32,000 IDPs, as part of the Agency’s early recovery response.

Najwa is quick to highlight that whilst the emergency presented many challenges, the ongoing situation in Gaza continues to have an impact on GI activities. “Our main objective is to build women’s capacities, including through employment opportunities but the Gaza situation provides limited opportunities for women’s participation in the labor market,” Najwa says.

Gaza has been under a tight blockade since 2007. Throughout 2013, exports from Gaza and people’s movements to and from the Strip remained virtually banned. The blockade destroyed Gaza’s previously dynamic trade-oriented economy and its capacity to create jobs and pushed the majority of the population into poverty and aid dependency. In the second quarter of 2014, the refugee unemployment rate reached 45.5 per cent, the highest level ever reported in UNRWA’s PCBS-based records since 2000. The female youth refugee unemployment rate is recorded as 87.1 per cent.

Despite the ongoing challenges, Najwa and her team continue to operate with a view to improving women’s personal and professional skills, improving their economic and social conditions and building the capacity of the partner CBOs. “I and my colleagues in the GI team will always continue to work hard in order to help women in Gaza access their rights,” Najwa said.

Overnight on 24 October the Israeli navy opened fire towards a Palestinian boat west of Rafah. No injuries were reported. No other major incidents were reported between 21 and 28 October.

UNRWA is seeking USD 1.6 billion for emergency relief, early recovery and reconstruction priorities in the Gaza Strip. More information can be found here.

The same information is available in Arabic here.