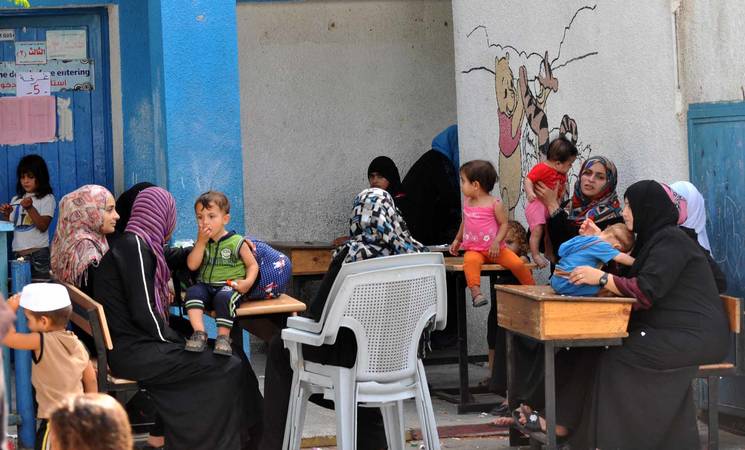 Due to the dramatic escalation in violence over the past week and the massive assault on Gaza, UNRWA has declared an emergency in all five areas of the Gaza Strip. The priority for the Agency is its emergency operations, providing assistance to those who have been displaced and sought shelter in UNRWA schools, while attempting to continue regular operations. Urgent funding needs persist and are increasing.

Past 24 hours: At the time of reporting, the political climate offered hope for an end to the current escalation in violence in the Gaza Strip. In the past 24 hours, Egyptian officials proposed a ceasefire deal between Hamas and Israel. At 08:00 there was no indication of its acceptance by either party.

The situation on the ground over the past 24 hours remained intense in Gaza. Close to 18,000 women, men and children spent the night in twenty-one UNRWA designated emergency shelters. Approximately 10,800 people have taken shelter in 16 UNRWA schools in Gaza City and about 7,000 in 5 shelters in northern Gaza. Reportedly, the IDF continues to send messages to residents in the North of the Strip, requesting them to leave their homes. The uncertainty for Gazans is relentless.

It is in the shelters that the displaced took Iftar, the traditional daily meal to “break the fast” during the month of Ramadan. Iftar is typically a very social event, involving family and community members. This year, due to the ongoing conflict between Gaza and Israel, many Gazans have had to evacuate their local neighbourhoods. They are unsure of if or when they will return home, and are reliant on food aid - bread, tuna and water from UNRWA and WFP - to feed themselves and their families. UNRWA has an existing partnership with WFP to provide food, but there is an urgent need for more funding to complete the food basket in shelters.

It is reported that should the situation continue to deteriorate, there is potential for a shelter to be opened in the Middle Area. In Rafah, southern Gaza, the local community is encouraging relatives to provide shelter to extended family members in need. Food donations and other charitable support is being directed through the local Central Emergency Committees, of which UNRWA is an active member.

As previously reported, the public health sector in Gaza is nearing collapse. To add to this burden, during the past 24 hours, an increased disruption to the functionality of UNRWA health centres in Gaza was reported, and one Health Centre in the Middle Area of the Strip reported damage to its water tanks.

UNRWA staff are working hard to maintain clean and hygienic shelters for internally displaced persons (IDPs). Over the past 24 hours, there were some cases of Viral Meningitis reported at three shelters in the North Area of Gaza. It is reported that all thirteen cases were referred to a local hospital and there have been no complications regarding treatment. It is understood that each patient had the disease prior to entering the shelter. UNRWA staff are taking all precautionary measures to ensure that the risk of the disease spreading is mitigated. This includes cleanliness of shelters, staff awareness activities and the issuing of public information leaflets.

As UNRWA continues its emergency operations to serve IDPs displaced by the current escalation in violence, the organisation’s regular work continues. This includes the dedication of UNRWA sanitation workers who risk their lives during the current violence, by working to keep the streets and alleyways of Gaza’s eight refugee camps clean. These teams work six days a week, keeping refugee camps as clean and hygienic as possible, including the collection and disposal of solid waste. This helps to limit the spread of disease and provides as healthy a living environment as possible. UNRWA is, as ever, grateful for the commitment of these teams and all of its 12,500 staff in Gaza – particularly during this precarious time.

According to OCHA, there were 15 deaths reported over the past 24 hours. This takes the reported total death toll since Tuesday to 189, with at least 1,360 injured. Reports indicate that at least 38 children have been killed over this time period.

Reportedly, 193 missiles were fired by Israel to the Gaza Strip. 111 rockets and 40 mortars were fired towards Israel. It is reported that 34 houses in Gaza were bombarded by Israel.

A total of 55 UNRWA installations have been damaged since 1 June, 2014.

In the past 24 hours, six UNRWA installations were damaged – five schools in Rafah, southern Gaza Strip and one health centre in the Middle Area of Gaza.