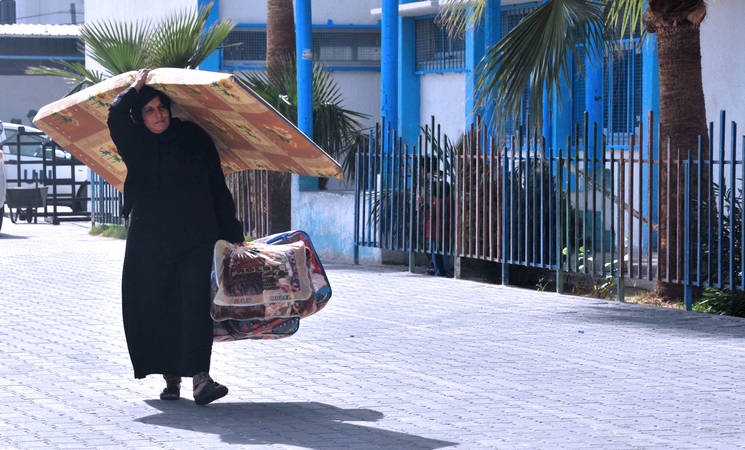 Operational environment: The general atmosphere in Gaza remains tense. There is an increase in demonstrations and sit-ins demanding UNRWA to accelerate its reconstruction efforts. An unclear timeframe around reconstruction and the workings of the Government-led Gaza Reconstruction Mechanism are proving frustrating for affected families. UNRWA remains a likely outlet for public anger, partially as a result of incitement by various factions. On 13 November, in a massive rally staged by the Hamas movement and attended by some 20,000 people at a stadium in Rafah, senior officials blamed UNRWA and the National Consensus Government for the alleged slow pace of shelter assessments and reconstruction.

On 11 November, around 350,000 liters of fuel, funded by the Qatari government, were delivered for the Gaza Power Plant (GPP), allowing it to resume partial operations and produce some 60MWs. Following the resumption of GPP operations, electricity is provided 16 hours per day on average in an eight-hour-cycle (8 hours on – 8 hours off – 8 hours on).

Life in an UNRWA collective centre: waiting for a better future 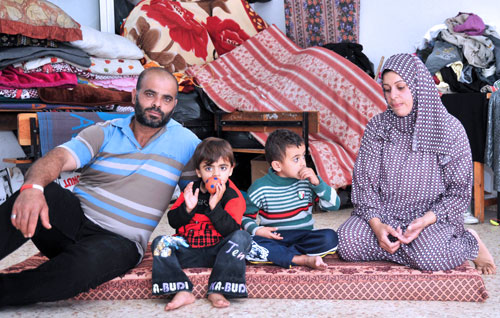 Thirty-four-year-old Inshirah Fathi is a Palestine refugee from the Shujaya neighborhood, one of the oldest and largest neighborhoods of Gaza City, which was severely damaged during the summer hostilities. Inshirah and her family were forced to flee their severely damaged home in mid July. Inshirah, her husband Nihad and their four children took refuge in the nearby Church of Saint Porphyrius in Gaza City.  “Our house was severely damaged, and we escaped to a neighboring house, then we took refuge at the church,” said Inshirah. “We fled the church when the adjacent church cemetery was bombed. We then took refuge at the UNRWA Rimal Preparatory Girls School in August 2014.”

Family Fathi was poor before the war, and trapped in the cycle of unemployment, poverty and aid dependency which became so typical for Gaza with its once flourishing private sector. The Israeli blockade on Gaza, which virtually bans exports, destroyed the economy and its capacity to create jobs. Now they are still poor but also homeless, and still taking refuge in one of the 18 UNRWA Collective Centres. Nihad, Inshira’s husband, used to work as a casual laborer in farms and earned some USD 100 per month. Nihad said: “Prior to the war, it was very hard for me to provide for my family as I did not have a decent income.” In the second quarter of 2014, the Palestine refugee unemployment rate surged to 45.5 per cent, the highest level ever recorded. Nihad’s case is representative for so many in Gaza: even if some are lucky enough to secure a job the income is not sufficient to provide for a decent standard of living. The Fathi family is classified as abject poor according to the Agency’s Poverty Survey, which makes them eligible for in-kind food assistance. Nihad also had the chance to get three short term job opportunities under UNRWA’s Job Creation Programme (JCP) over the course of several years prior to the war.

At the UNRWA Collective Centre, the family receives meals, hygiene supplies, mattresses and blankets. Their children also received stationary at the beginning of the new school year. Inshirah said: “I appreciate the aid we get from UNRWA at the collective centre, but I would rather live in my own apartment. I want to maintain my privacy and live my life with my family as we always did.”  Nihad comments on what his wife said: “I wish our home will be rebuilt soon. I also want an end to the blockade so that I can get a job. I want to earn my living so that I will not need assistance any more.”

There is a noticeable increase in firing at fishermen by the Israeli navy, which was reported on seven separate occasions. IDF fire against Palestinian farmers was reported on one occasion. Over the reporting period eleven Palestinians were arrested when trying to cross into Israel. Several demonstrations in public squares and outside UN and other installations were reported during the week. Two test rockets were reportedly fired from Gaza towards the sea on two separate occasions.