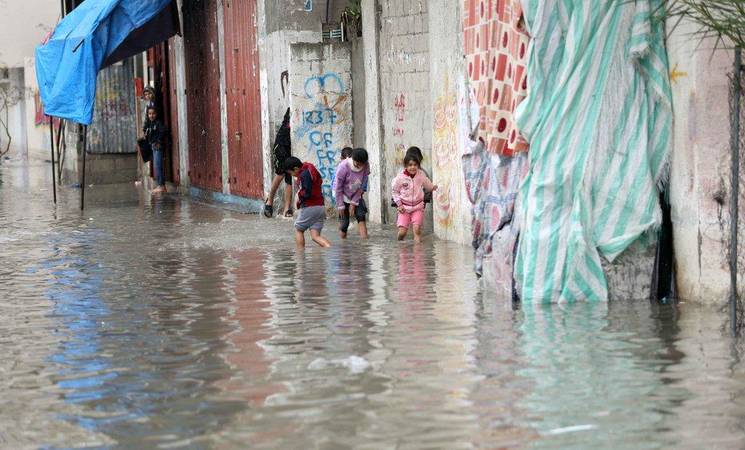 Operational environment: Uncertainty regarding the political future and the security environment in Gaza remain major challenges for UNRWA and the refugees the Agency serves. Whilst reconstruction is an urgent priority, sustainable recovery of Gaza requires far more than rebuilding what has been destroyed. Lifting the blockade and addressing Gaza’s structural challenges and increasing needs are the basis for a re-development process. The escalation of hostilities may have ceased for now, but the blockade of Gaza continues to impact all aspects of daily Palestinian life and corrodes the enjoyment of most human rights.

Life as a refugee in Gaza: “We had nothing except for the clothes we were wearing”

Hani Uliwa’s deadpan eyes move slowly across the cement rubble that was once his family’s living room. His movements are stilted. His greying skin wears the battered scars of a troubled life. A deep sigh is released before the 44 year-old begins to explain what life has been like living as a refugee in the Gaza Strip.

Obligated to cut short his education to support his father’s family, Hani’s working life started at 17 years of age labouring construction in Israel. But in 2000 (second Intifada), he was forced back to Gaza where the only paid employment he could find was setting himself up as a taxi driver, using his savings to buy a car.

”I used to earn a monthly income of US $1,200 when I worked as a labourer but then earned US $200 as a taxi driver. This drastic decrease in income made it very hard for me to make ends meet,” he said. And there are many mouths reliant on Hani. In 1990, at age 20, he was married. He now has eight sons and one daughter aged between five and 24.

Of their life, Muna, his 40 year-old wife said: “Life is very difficult in Gaza - mainly following the demolition of our home during the recent conflict. Fortunately, my family managed to survive the heavy bombing in Toufah Area, Gaza City, and took refuge at Al Yarmouk area. First, seven days at my brother in law’s home, then at an UNRWA shelter in Beach Camp. Finally, at an UNRWA Collective Centre at Zaitoun Prep Girls School.”

“When we arrived at the Collective Centre, we had nothing except for the clothes we were wearing. We received mattresses and blankets, some clothing and other basic supplies.”

In early November 2014, after shelter assessments declared their home destroyed, the family received US$ 1,500 from UNRWA – US $1,000 transitional shelter cash assistance (TSCA) and a US $500 reintegration package.

“We managed to rent a flat close to our demolished home and we bought a washing machine and kitchen kits to have minimum requirements for living in the new apartment,” Muna said.

Since the deadly summer conflict broke out in July 2014, the family has remained reliant on UNRWA’s services to meet their basic needs. This includes utilizing UNRWA food, health, education and social service support. A program that has spiraled from supporting 80,000 Palestinian refugees in Gaza in 2000, to over 867,000 registered beneficiaries since 2014.

With the seven-year Israeli-imposed blockade crippling local industry and means to make a living, the Uliwa family now depend exclusively on UNRWA’s food assistance program for daily food needs. Hani’s modest self-employment as a taxi driver was cut short when his car was destroyed in the summer conflict, however he has been able to secure employment working as a bus driver for a private school and earns US $120 per month. Thousands of others in Gaza are not so lucky.

According to PCBS data, and prior to the summer hostilities, Gaza’s unemployment rate surged to a record high 44.5 per cent in the second quarter of 2014. Almost half of all refugees are unemployed (45.5 per cent) the highest level ever reported in UNRWA’s PCBS-based records.

As for day to day life, Hani wastes little time explaining how precarious the situation has become for his family. “Electricity is a concern for everyone in Gaza. It poses additional challenge to our weary family, I am unable to warm my children in this urgent and hard winter; my children need electricity to study, and it is very hard living conditions without electricity.”

Despite these hardships, Hani’s wife Muna said she is trying to remain optimistic for the sake of her children. “The only dream I have now is to see my home rebuilt and to move to a normal life again, with a permanent job for my husband,” she said.

During the reporting period, there were numerous incidences of the IDF opening fire towards Palestinians near the fence and of Israeli navy fire at Palestinian boats. In one incident on 3 January, Israeli patrol boats opened fire towards Palestinian boats - one boat was burnt and one Palestinian injured. The reporting period also indicated the firing of several test rockets from Gaza into the sea – on 17, 20, 21, 26 and 29 December, and also on 6, 10 and 11 January. On 19 December, militants fired two rockets towards Israel; one dropped short and the other landed in an open area in Eshkol Regional Council and no injuries or damage was reported. On 20 December, the Israeli Air Force fired three missiles targeting a Hamas training facility. Minor damage was reported at Al Qarara UNRWA Boys School. No injuries were reported. On 24 December, an exchange of fire took place between Palestinian militants and IDF troops positioned at the border east of Khuza’a area. One militant was killed and one was injured. This is the first such incident involving militants since the end of the summer hostilities. On 28 December, two IDF bulldozers entered approximately 150 metres from the border into Sofa area, northeast of Rafah City, in the south of Gaza. IDF troops conducted a clearing operation before withdrawal to the border. On 2 January, four Palestinians crossed illegally into Sinai opposite Salah El Din gate – Egyptian border troops opened fire and arrested three of them, while the fourth one was injured and later passed away.

UNRWA is seeking USD 1.6 billion for emergency relief, early recovery and reconstruction priorities in the Gaza Strip. More information can be found here (English PDF) and here in Arabic (PDF).