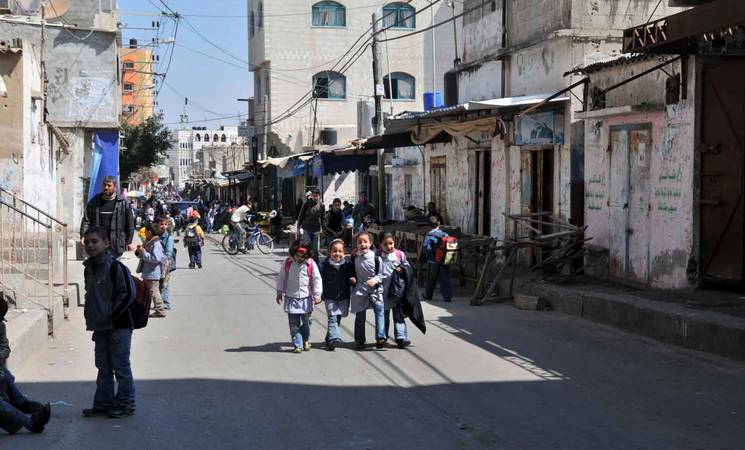 Operational environment: There were a number of demonstrations and sit-ins across the Gaza Strip following UNRWA’s announcement of being forced to suspend its self-help cash assistance programme. The demonstrations speak to a larger frustration being felt by families in Gaza, with the pace of reconstruction moving slowly and no significant chance in the political situation. Demonstrations were reported outside ICRC offices as well as UNRWA offices and UNSCO. On 28 January, protestors conducting a sit-in outside of UNSCO offices in Gaza burnt tires and threw stones at the office. Some also broke into the UNSCO compound. Minor damage was reported before the protest was contained. In a statement about the break-in, the United Nations Special Coordinator for the Middle East Peace Process, Mr. Robert Serry, expressed “outrage” at the assault. Further, his statement noted that, “this serious incident took place in the context of increasing incitement against the United Nations in Gaza.” The reporting period also recorded protests by different groups against the blockade. This included school students who had organized a protest east of Khuzaá – one of the most badly damaged areas in Gaza. 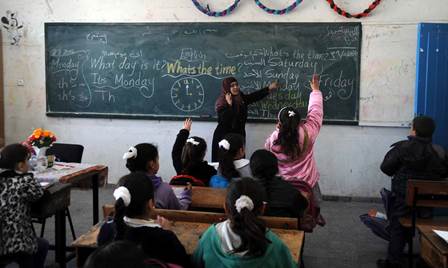 Raghda Al Khatib is early to school for the first day of second semester. As she rearranges the desks in her classroom in anticipation of the arrival of her young students, the UNRWA teacher at Zaitoun Elem co-Ed school “C” in Gaza City, recounts the priorities for the day and her excitement at seeing her pupils again after a one week break.

The 35-year-old Palestine refugee said she knows her students will be pleased when they receive their semester one exam results.

While the pleasure a teacher feels when their students excel may be universal, Raghda and her 8,024 fellow UNRWA teachers across the Gaza Strip are in a situation that is far from mainstream.

A seven year old Palestinian child from Gaza has never left the 365 square kilometre coastal enclave due to the Israeli imposed blockade in place since 2007, and has witnessed three wars. In the summer 2014 hostilities, 542 children were killed and around 3,000 were injured, according to Protection Cluster statistics. Trauma scars the city and its people.

Raghda’s home was one of the over 96,000 houses across Gaza Strip damaged or destroyed in the July/August hostilities. As a single-mother of seven children, it is a loss she could have done without. More than 30 per cent of UNRWA’s school buildings, 83 in total, had structural damage. Ninety percent of the 252 UNRWA schools in Gaza are run on a double shift basis, and some even on triple shift, effectively reducing the school day to 4 hours. As a result, refugee children in Gaza receive a severely truncated education and have little or no opportunity to engage in recreational or creative pursuits as school buildings are all day occupied.

UNRWA provided psychosocial training to teachers to improve their ability to deal with their own, and their students’, distress. This was a tool that Raghda said she lent on heavily as way to help “release” her students’ despair.

But with the arrival of a new semester in the first week of February, and the return of nearly 240,000 students to UNRWA schools, small glimmers of hope for Gaza’s Palestine refugee students are starting to emerge.

Approximately 250 new teachers have been recruited by UNRWA to keep pace with growing class numbers. In the year 2000, UNRWA schools averaged 49 students per class. This is now back to an average of 38 students.

With the completion last month of three UNRWA schools in Gaza City, Beit Hanoun and Jabalia - funded by the United Arab Emirates (UAE) and the Islamic Development Bank (IDB)   - almost 4,000 refugee students started the second semester in the new buildings.

As children stream in for the morning shift at the school where Raghda teaches, it is difficult to imagine that only months ago the building was operating as one of 90 UNRWA emergency shelters for internally displaced persons. The school now welcomes 1,634 students each day, Three hundred of them are still displaced by recent conflict.

“We are doing our best to avail a decent education environment for students,” said School Principal, Mohammad Usruf, who leads Raghda and her colleagues at Zaitoun Elem co-Ed school “C”. The future, he believes, must remain with “helping Gaza’s young.”

During the reporting period, there were a number of incidences of the IDF opening fire towards Palestinians near the fence and at Palestinian boats. On 30 and 31 January, militants fired a total of 17 test rockets towards the sea. On 3 February, Egyptian security forces opened fire towards two Palestinian military posts inside the Gaza Strip near the fence between Gaza and Egypt.

To response to the needs arising from the July/August conflict UNRWA is seeking USD 1.6 billion for emergency relief, early recovery and reconstruction priorities in the Gaza Strip. More information can be found here:

Following the escalation in violence between Gaza and Israel in November 2012 an understanding was reached between Hamas and Israel, mediated by Egypt. 2013 was subsequently the quietest year in a decade, in terms of hostilities between Israel and Gaza. Events in 2014, however, have led to a profound deterioration in the situation.

From 8 July until 17 September 2014, UNRWA declared an emergency in all five areas of the Gaza Strip in response to escalating violence between Israel and Hamas. Until the 26 August cease-fire, civilian displacement and fatalities reached unprecedented levels.

The Israeli blockade of Gaza entered its 8th year in June 2014 and continues to have a devastating effect as access to markets and people’s movement to and from the Gaza Strip remain severely restricted. The economy and its capacity to create jobs has been devastated, with the majority of the population becoming dependent on humanitarian aid to meet basic needs. The number of Palestine refugees relying on UNRWA for food aid has increased from fewer than 80,000 in 2000 to approximately 868,000 today.

UNRWA is a United Nations agency established by the General Assembly in 1949 and is mandated to provide assistance and protection to a population of some 5 million registered Palestine refugees. Its mission is to help Palestine refugees in Jordan, Lebanon, Syria, West Bank and the Gaza Strip to achieve their full potential in human development, pending a just solution to their plight.