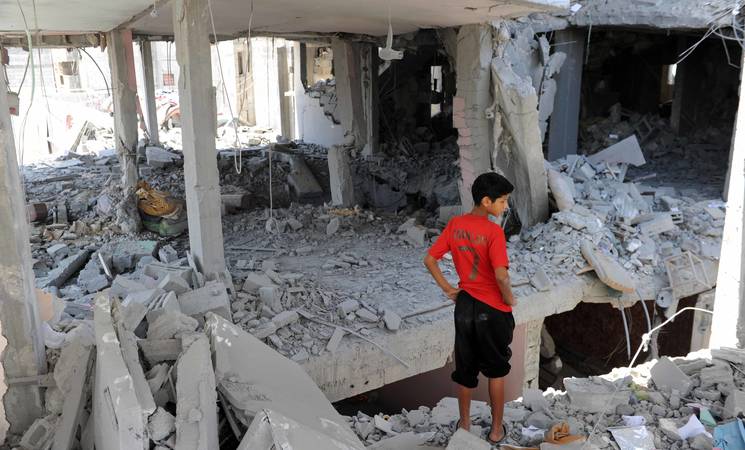 Due to the dramatic escalation in violence over the past week and the massive assault on Gaza, UNRWA has declared an emergency in all five areas of the Gaza Strip. The priority for the Agency is its emergency operations, providing assistance to those who have been displaced and sought shelter in UNRWA schools, while attempting to continue regular operations. Urgent funding needs persist and are increasing.

Past 24 hours: News of a possible ceasefire between Hamas and Israel dominated the news on 15 July. Egyptian officials proposed a ceasing of all hostilities in the Gaza Strip. This was accepted by the Israeli cabinet, however reports indicate that the terms of the ceasefire were not agreeable for Hamas.

Rockets continued to be fired at Israel throughout the day, and Israel resumed its military activities in Gaza in the afternoon. It is reported that several homes of senior Hamas officials were bombarded by strikes overnight. There is no sign of the current tension easing.

The devastating consequences of the ongoing conflict continue to be acutely felt by Gazans. Reports indicate that the IDF has sent more messages to residents in the northern and north-eastern Gaza Strip to evacuate their homes by 08:00 on 16 July. It is also reported that the Palestinians' Gaza interior ministry has told the same people not to relocate.

As of 08:00, almost 20,000 internally displaced persons (IDPs) had evacuated their homes in the north and north-eastern part of Gaza, and taken refuge in UNRWA’s 21 designated emergency shelters. The need to open additional shelters is being discussed today. The uncertainty and despair felt by the Gazan population, is especially painful as children continue to ask why their houses are shaking and why there are bombs during Ramadan.

UNRWA staff are maintaining the organization’s dedicated emergency shelters, and ensuring the displaced have somewhere to sleep, food to eat, water to drink and hygiene kits to stay healthy. In addition to Family Hygiene Kits, UNRWA is providing mothers with Baby Hygiene Kits. Many times basic hygiene items can be the difference between sickness and health. To ensure displaced mothers can continue to take the best possible care of their babies, each of the Baby Hygiene Kits includes a toothbrush and toothpaste, soap, a roll of toilet paper, shampoo, talcum powder, a comb and a small toy.

According to the Protection Cluster, there were 14 deaths during the last 24 hours, and a total of 204 fatalities since 8 July, including at least 28 women and 38 children. The Palestinian Ministry of Health reports at least 1,550 injuries during the same time period.

Yesterday also marked the first reported Israeli civilian causality, since the recent escalation of violence. Reportedly, an Israeli man was killed at the Erez border crossing, whilst volunteering to deliver supplies to soldiers in the area. It is reported that an Israeli soldier was also injured.

Reportedly, 371 missiles were fired by Israel to the Gaza Strip. 231 rockets and 35 mortars were fired towards Israel. It is reported that 39 houses in Gaza were bombarded by Israel. Reportedly, the IDF positioned at the border fired some 130 tank shells and the IDF Navy fired 42 shells.

A total of 58 UNRWA installations have been damaged since 1 June, 2014.

In the past 24 hours, three UNRWA installations were damaged – a health clinic and a boys school in Rafah, southern Gaza Strip, and a girls school in Kahn Younis.