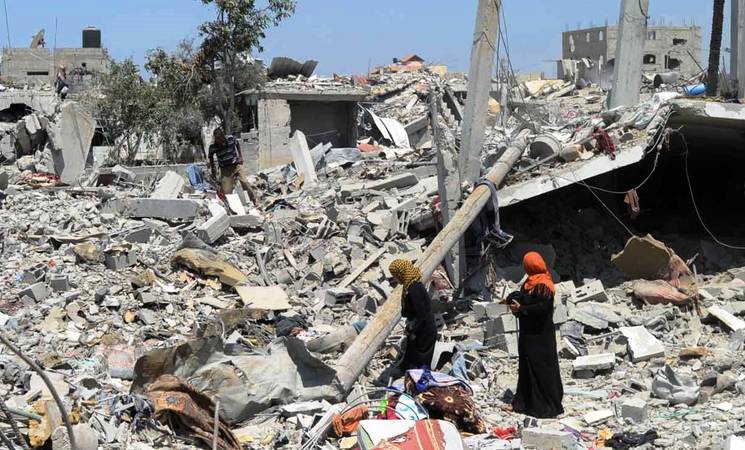 Operational environment: The number of protests and civil unrest continued during the reporting period, with demonstrations calling for faster reconstruction and lifting the blockade, and against the killing of three Palestinian students in the USA all featuring. Protests outside UN installations and INGO offices were reported. Despite UNRWA’s suspension of the shelter cash assistance programme due to lack of funding, it still seems to benefit from its image and performance during the conflict which saw UNRWA installations as the safest haven for the population and the Agency as the primary aid provider. On 16 and 17 February, sit-ins were held in front of UNRWA Rafah Warehouse. The protest was against excluding the families from Saudi Housing Project phase three. The demonstrators forced UNRWA employees to leave and closed the office. Demonstrators also moved to UNRWA’s RSSP Rafah West Office and UNRWA employees were forced to leave and close the office. Similar sit-ins were held on 10 February. 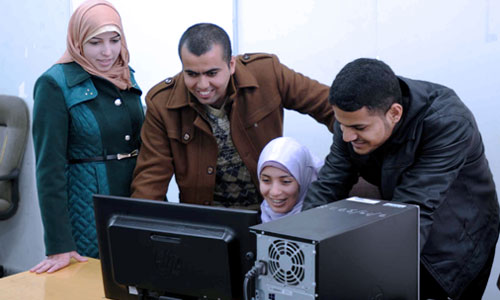 As part of its ongoing commitment to enhancing employment prospects for young Palestine refugees in Gaza, UNRWA is piloting a new social enterprise, the Gaza Gateway. The initiative is designed to help young IT (information technology) graduates gain work experience and employability training in an effort to create new opportunities within the devastated Gaza economy. “It is like a survival kit. It changes your life and gives you a chance,” said Ahmed, a 27 year old recent graduate involved in the Gateway.

Approximately 1,000 Gazans like Ahmed graduate with computer-related degrees in Gaza each year. However, in 2014, the Palestinian Central Bureau of Statistics (PCBS) data estimated a 75.1 per cent unemployment rate for Computer Science graduates, making it the sector with the highest rate of unemployment amongst the specialties studied.

Refugee unemployment in Gaza reached 45.5 per cent in the second quarter of 2014, the highest level ever reported in UNRWA’s PCBS-based records. The IT industry in Gaza is essentially trapped in a negative cycle: graduates need training and experience to refine their employable skills, but without a stronger skills base, companies cannot grow sufficiently to generate employment. UNRWA’s new initiative responds to this challenge by building a bridge from IT graduation to private sector employability, with a view to demonstrating that Gaza can deliver competitive commercial services.

The new social enterprise is also timely - offering a beacon of hope to young people in the early recovery period following the 50 days of hostilities in summer 2014. The Gaza Gateway team and program participants were personally affected by the hostilities and some lost homes, family and friends. The opportunity to work and focus on their future is welcomed by all of them. “I was looking for a job for three years and at some point I felt like my mind stopped thinking,” recalls 26 year old Rose, who works as a team leader for the Gateway.  “It was frustrating. Gaza Gateway gives us energy to achieve things despite the difficult situation.”

The social enterprise leverages the short and medium-term IT needs of UNRWA into a permanent part of Gaza’s employment infrastructure. Business and social aims are inextricable parts of a single solution:  Gaza’s first learning workplace. While working with the Gateway for approximately 12 months, graduates operate as Project Associates and spend regular time in structured skills training to develop an employable CV. “There is a lot of training included, it is not just work,” comments Ahmed. And Rose adds: “Gaza Gateway is different because the main purpose is training in topics that are actually relevant for the market. This gives our careers a future.”

The Gaza Gateway is an UNRWA initiative that is being implemented with the support of a three-year US$ 1.3 million contribution from the Korea International Cooperation Agency (KOICA). Korea is an increasingly important UNRWA donor, making generous contributions to both the General Fund and emergency appeals.  Korea’s total contribution to UNRWA has increased from US$ 61,000 in 2012 to US$ 1.1 million in 2014. Recent support has been both crucial and timely – addressing the desperate needs of Palestine refugees living through crises.

During the reporting week, there were a number of incidences of the IDF opening fire towards Palestinians near the fence and at Palestinian boats. On 11 February, an IED exploded in an abandoned house in the market area.  On 15 February, militants fired two test rockets from North West of Gaza City towards the sea. No injuries were reported. On 16 February, militants fired two mortars towards Israel. Both dropped short and landed inside Gaza near the fence. No injuries or damage reported.

At approximately 17:25 on 16 February, UNRWA staff discovered smoke coming from a closed room at a Collective Centre (CC) in Beit Hanoun. UNRWA immediately contacted the civil defense and the cause of the fire is being investigated. Preliminary reports indicate that one infant died and two others were injured, reportedly as a result of the fire. The Agency extends sincere condolences to the affected family and has made a counsellor available. For UNRWA, the issue of the safety and security of IDPS sheltering in its Collective Centres is a matter of paramount importance. The Agency has recently conducted fire safety training, including for Collective Centre staff in Beit Hanoun, and undertook a review of power grids in the CCs to promote a safe environment within the CCs.

To respond to the needs arising from the July/August conflict UNRWA is seeking USD 1.6 billion for emergency relief, early recovery and reconstruction priorities in the Gaza Strip. More information can be found here (PDF). Information is found in Arabic here (PDF).