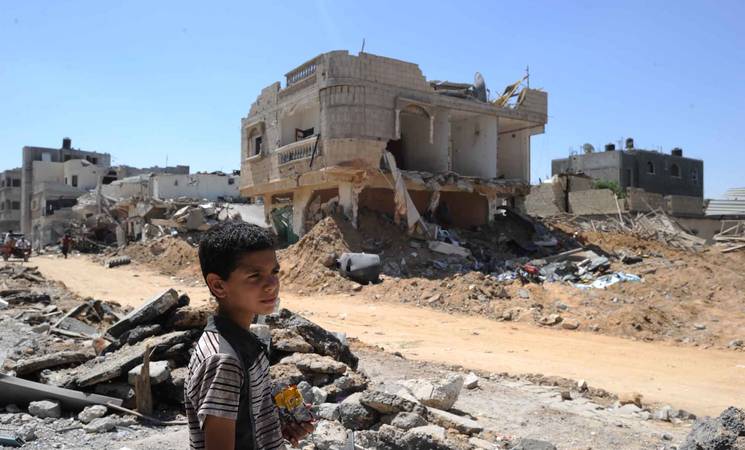 Operational environment: The situation in Gaza remains politically, socially and economically unstable. Gaza’s infrastructure and economy was devastated even before last summer’s conflict. People are frustrated and uncertain of what the future holds.

Those hired under the former de facto government are still not receiving full salaries – the last of which was received in October 2013. Since August, several smaller payments have been made to civilian staff, including a humanitarian payment facilitated by the United Nations last year. It is reported that also the Palestinian Authority (PA) salaries for the last two months were paid only on a sixty per cent basis, with reportedly approximately 200 staff not being paid at all. Civilian and security employees of the former de-facto government were reportedly paid 1,000 NIS. A number of protests demanding salary payments were reported during the week.

During the reporting week, different Palestinian factions and militants exchanged fire in Beit Lahia due to a land dispute. One man was injured. Daily protests and civil unrest continued outside UN installations and INGO offices. Protesters demanded the release of Palestinian prisoners in Israeli prisons, the opening of the Rafah crossing, a faster reconstruction process and the lifting of the Israeli imposed blockade. On 28 February a sit-in was held in front of an UNRWA Collective Centre in Beit Hanoun, protesting against the decision to transfer IDPs to another CC. On the same day, there were demonstrations in Jabalia and Nuseirat against the Egyptian court’s decision to declare the Hamas movement a terrorist organization. Similar protests were held on 1 March in Gaza, Khan Younis and Rafah.

“RCVI was always there for me” 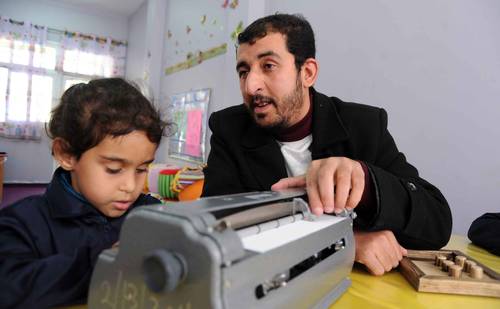 Mohamed Abu Mousa is teaching 4 year-old Salma how to use type the Arabic alphabet in Braille language. Mohamed was once himself a pupil at RCVI.

Every morning, seven large UN buses from all the corners of Gaza arrive at the UNRWA Rehabilitation Centre for the Visually Impaired (RCVI) in the Rimal neighbourhood of Gaza City. For the past few weeks, in addition to older students, these buses have carried kindergarten aged boys and girls. On 31 January 2015, UNRWA opened a kindergarten for visually impaired pupils – the only one in Gaza.

Surrounded by children eager to learn and listen, Mohamed Abu Mousa, the 29 year-old kindergarten teacher, who is also blind, seems satisfied. “I lost my eye sight when I was four,” he explains. Shortly thereafter he joined RCVI to learn how to cope with his impairment. “RCVI was always there, with me, supporting and promoting me,” he continues.

His own experiences helped Mohamed to fully understand the needs of his students.  “At the beginning, I was so scared to leave home where my family was fully helping me, but then in school things started to change, and with the teachers support I became a distinguished pupil,” he remembers. The various trainings and education he received through RCVI equipped Mohamed with new daily life and social skills.

Indeed, the RCVI is a preparation for life. The kindergarten students are taught basic skills such as how to tie their shoes and how to use the bathroom. In addition, RCVI tries to enhance their other senses to compensate for a loss of sight, for example through music. The RCVI is part of UNRWA’s Relief and Social Services Programme, which promotes the development and self-reliance of less-advantaged members of the Palestine refugee community – especially women, children, people with disabilities and the elderly.

Since its foundation in 1962, UNRWA’s RCVI in Gaza has made great advances. “Although the services provided by RCVI at that time were humble attempts, it still helped a lot to change the lives of visually impaired persons in Gaza. We felt that RCVI is our second home and we were able to overcome the isolation status that normally overwhelmed us,” explains Mohamed.

Cooperation with the families is key for the development of the children and success of the Centre. The RCVI maintains a social and psychological support unit that advises families on supporting visually impaired children. Once a year, the RCVI brings together all the mothers of students and provides them with education sessions. Many of these are practical, including being taught the braille language and how to use Perkins typing machines. Each child is provided with one of these machines in the Centre, and one on a loan-basis at home. The average cost of these machines is approximately US$ 1,000, a price only few people in Gaza could afford to pay.

The newly opened kindergarten was made possible due to the generosity of a private donor. The grant of US$ 180,000 will keep the kindergarten running for the next three years. Thirteen children currently attend the RCVI kindergarten; however, this number is likely to increase with the beginning of the next school year in September.

During this week, IDF troops reportedly fired at Palestinians near the fence and at Palestinian boats on a daily basis. On 28 February, an unexploded ordinance (UXO) exploded in Rafah and killed one person; the second person sustained shrapnel wounds and was evacuated to the hospital. On 4 March, an IDF incursion of 150 metres into Gaza was reported. On 25 and 26 February and on 2 March, militants fired test rockets towards the sea. No injuries were reported.

US$ 175 million has been pledged in support of UNRWA’s emergency programme, for which a total of US$ 720 million is required. This leaves a current shortfall of US$ 545 million. UNRWA urgently requires US$ 100 million in the first quarter of 2015 to allow refugee families with minor damage to repair their homes and to provide ongoing rental subsidies.