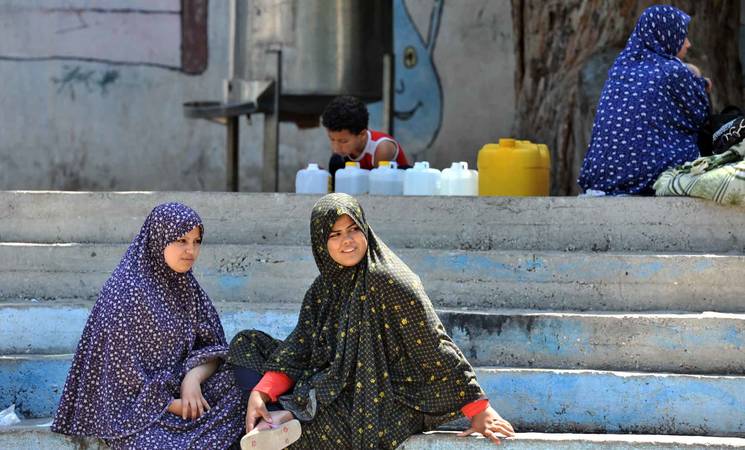 Operational environment: Despite the tough and tense situation that dominates life in Gaza, many residents of the Gaza Strip took to the streets this week to march in solidarity with their fellow Palestinians trapped in the Yarmouk Camp in southern Damascus, Syria. Meanwhile, according to media reports, alleged Islamic State (IS) supporters in Gaza reportedly called for the release of their fellow sympathisers after security forces of the former de-facto government allegedly arrested suspected members over the past week. Also in the media, the Palestinian Ministry of Interior and National Security denied the existence of IS-affiliated groups in Gaza or the arrest of any members allegedly associated with IS. The former de-facto government has nevertheless launched a campaign to combat extremism and “erratic and radical ideology,” as covered by media outlets.

The National Consensus Government appointed Gaza refugee Kamal Sherafi as new coordinator for the Gaza reconstruction file. Mohammed Mustafa, the previous deputy prime minister and minister of economy responsible for the reconstruction of war-ravaged Gaza resigned end of March 2015.  Sherafi was a former Minister of Health in the Salam Fayyad government.

During the reporting week, a number of Improvised Explosive Devices (IEDs) were detonated in Gaza city; no injuries were reported. On 10 April a family dispute broke out in Khan Younis, southern Gaza, and three homemade bombs were thrown towards the UNRWA Al Amal Elementary Girls School which is used as shelter by one of the involved families. On 8 April unexploded ordnance (UXO) exploded in the Deir El Balah camp in the Gaza Middle Area; two children sustained shrapnel wounds.

Protests during the reporting week continued, mostly concerning the expression of solidarity with Palestinians trapped in the Yarmouk Camp in Syria or the demand to release Palestinian prisoners from Israeli jails.

Dreaming of walking to school again 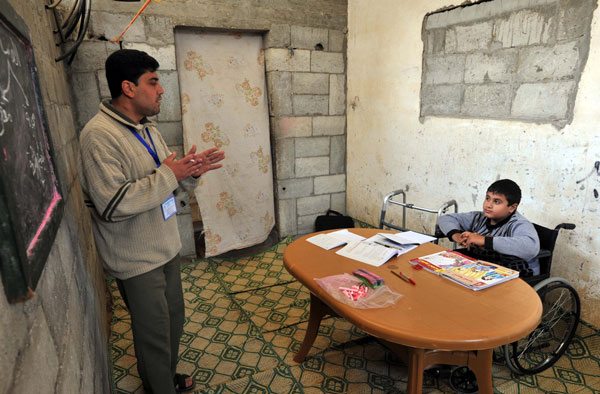 Yousef Mansour listens mindfully to his teacher Ahmad Al Masri who visits him at home every day to teach him Mathematics, Science or English. Due to the UNRWA project, Yousef regained his willingness to learn and dream again. © 2015 UNRWA Photo by Khalil Odwan

10-year old Yousef Mansour was playing with his friends in front of the UNRWA Jabalia Elementary Girls school that served as a designated emergency shelter during the 2014 summer conflict when it was struck by three Israeli projectiles on 30 July 2014.

“I was playing with my friends when I suddenly felt blood running down my body. The next thing I knew is that I woke up in a hospital with great pain in my leg,” remembered Yousef who was rendered unconscious by the violent incident.

The shelling had caused numerous injuries and fatalities among the approximately 2,945 internally displaced people who had sought refuge in the shelter as well as among people outside in the street like Yousef.

Severe factions in his left leg left Yousef unable to walk and so he missed the first semester of the fourth grade at his school. Tied to his wheel chair at home, he felt isolated and angry:  “I was sad seeing my friends going to school, my brothers playing outside in the street and I myself was only watching them, unable to run or play football like all the others,” he recalled sadly.

Hope came back when his name was listed among those who would benefit from the ‘supporting students in Gaza after the summer 2014 hostilities’ project by UNRWA. The project has started in November 2014 and provides special educational and psychological support to injured refugee students at UNRWA schools, and if necessary at their homes, across the Gaza Strip.

“300 UNRWA students from the north of Gaza were injured during the July/August 2014 armed conflict. We allocated 30 special teachers to support their special needs, starting with providing rehabilitation services and special needs education,” commented the project area coordinator in the north of Gaza, Mrs. Wafa El Bakri.

Across Gaza, an estimate of 853 injured refugee students will benefit from this project funded by Islamic Relief Canada with approximately US$ 1 million.

The project allowed UNRWA to organize a teacher who visits Yousef at home on a daily basis, teaching him Mathematics, Science, English and other relevant subjects in order for him to catch up on the missed out school material. “We also support Yousef with stationary and curriculum books, and we coordinate with UNRWA clinics to provide him with the necessary physiotherapy. It is an extensive process that involves the whole UNRWA project team,” explained Mrs. Wafa further.

Poverty and unemployment rates are sky-rocketing in Gaza as a result of the Israeli blockade and repeated armed conflicts, and so Yousef’s father was not able to afford the extensive medication and rehabilitation services his son needs to recover and to go back to school one day.

“Yousef lost his enthusiasm. He did not positively respond to our humble attempts of teaching him at home,” said his father Ismail Mansour, “but after the UNRWA team reached out to him and started with their home visits, he was willing to learn again”.

With a shy smile on his face Yousef said he wishes to become a dentist in the future. But in the meantime his biggest dream is to walk to school again where he can join his classmates and be a normal child like everyone else.