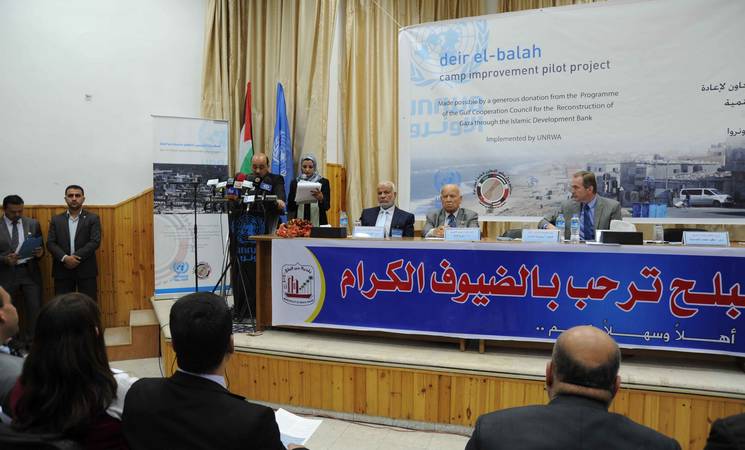 Operational environment: An Improvised Explosive Device (IED) exploded near UNRWA Headquarters in Gaza on 18 April without causing injuries or damages. Over the past week there has been an increase of similar incidents in Gaza City. On 19 April, eight members of the Palestinian Cabinet arrived in Gaza to discuss issues related to last year’s reconciliation deal between Hamas and Fatah. Media outlets report that the delegation left the enclave one day later without having reached an agreement. Meanwhile, the Israeli President Reuven Rivlin on 20 April has given Benjamin Netanyahu an extension until 6 May to form a government, according to the New York Times. Also as reported in the media this week, the Israeli government has reportedly unblocked almost half a billion US dollars that it had confiscated from Palestinian tax revenues since beginning of 2015 – it is thought that this will allow the Palestinian Authority (PA) to pay December and January salaries to 180,000 civil servants, state media reports.

In a new poll released on 14 April by the Arab World Research and Development Organisation, 74 per cent of Gaza respondents (a total of 1,200 from Gaza and the West Bank) stated that their economic situation has declined since last year.

On 14 April, a five floor apartment building in the Deir El Balah refugee Camp collapsed without causing injuries. The building had been impacted during the last conflict.

On 18 April, a 70-year old woman died in Jabalia, northern Gaza, when her house - also partially destroyed during the last conflict - collapsed.

“There is no one else I would turn to for help” 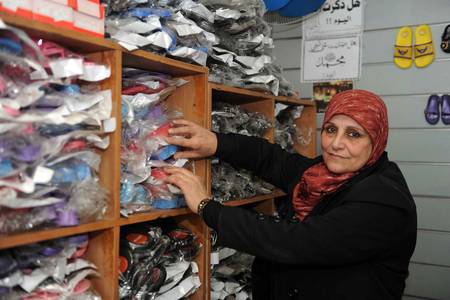 “My business improved my life, ” says Samira Hasan Muhaisen who owns a wholesale  and retail shoe shop that she built up with the support of the UNRWA microfinance department. Photo credit: © UNRWA 2015 Photo by Shareef Sarhan.

Twenty years ago, Samira Hasan Muhaisen started with only US$ 200 when she opened a home-based business through selling all types of shoes and bags to people in her neighbourhood. Very soon afterwards, the pro-active entrepreneur became a client of the UNRWA microfinance department; already after the first three loans she succeeded in opening her own shop.

“The UNRWA loans have given my life dignity,” says Samira, sitting behind a small desk in her shoe shop in the Daraj neighbourhood of Gaza city centre. “My business improved my life. I learned how to be a successful merchant.”

Samira is one of 108,000 clients that have received support from the UNRWA microfinance department since its establishment in 1991; forty per cent of its clients in Gaza are women. The programme exists to improve the quality of life of small business owners, micro entrepreneurs and poor households through the provision of training, credits and other financial services that sustain jobs, decrease unemployment, reduce poverty, economically empower women and youth and provide income-generating and asset-building opportunities to Palestine refugees and other poor and marginal groups.

Over time, with growing market reputation and client confidence, Samira was able to transform her business into a wholesale and retail shop. Today she is still receiving micro loans from UNRWA as continuous investment. The energetic lady never stops thinking like a businesswoman.  “How can the money be better capitalized, how can the business be expanded, how can it be more profitable,” she asks herself. “And how can it give a future to my children?” Samira dreams about expanding her business with additional stores and new commodities, in addition to empowering one of her talented sons to be her business partner.

Despite the Israeli blockade that has crippled Gaza’s once bustling economy due to heavy restrictions on free movement of goods and the loss of access to traditional markets and productive assets - since the blockade’s inception in 2007, Gaza’s exports have dropped by 97 per cent - Samira holds hopes for the future and dreams of an “opportunity for Gaza and its people” to revitalize.

“I wish that UNRWA supports me, my ideas and my business, until the end,” she declares. “Because there is no one else I would turn to for help.”

On 14 April, militants fired six test rockets and on 21 April, one test rocket, towards the sea. On 14 April, two Israeli tanks entered approximately 200 metres into Kahn Younis area and conducted a clearing operation. On 21 April, one Israeli tank and four bulldozers entered approximately 150 metres into the Gaza Middle Area, southeast of the Maghazi refugee Camp and conducted a clearing operation