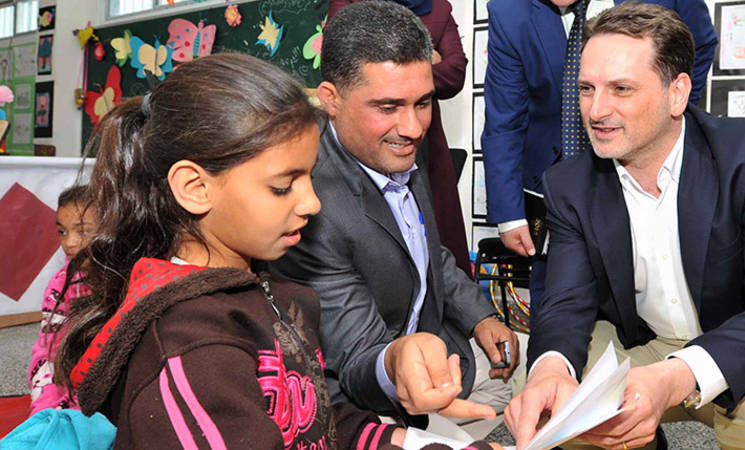 Operational environment: Capturing much of the reality in Gaza at the moment, ‘as bleak as ever’ is the title of a recent article in The Economist that describes the situation in the Strip, mentioning the ongoing homeless crisis and states that “Israel’s government lets Gazans import only a fraction of the cement they need.”

The Palestinian Authority (PA) employee’s salary crisis has reportedly improved over the past weeks with the release of almost half a billion US dollars in Palestinian tax revenues that Israel had collected on behalf of the PA but withheld over the past months. From December 2014 to March 2015 the PA had reportedly only been able to pay 60 per cent of the staff salaries above NIS 2000 (approximately US$ 511); staff with salaries below NIS 2000 had received full payments during that period. The pending payments were issued on 22 April 2015. However, while the banks did not deduct loans from the salaries during the period from December 2014 to March 2015, they now have reportedly deducted loans from the salaries, leaving some employees with very little. Sources indicate that salaries for April 2015 are expected to be paid by the end of April or beginning of May 2015. Pending payments for private sector bills are declared to be processed starting from 26 April 2015.

A number of Improvised Explosive Devices (IEDs) exploded during the reporting week. On 26 April one detonated in front of a Fatah activist’s house and damaged his car. No other injuries were reported. On 21 April an unexploded ordinance (UXO) exploded in Beach Camp and injured three civilians. On the same day an UXO was found while a truck was unloading sand in front of a UN residency building. It was removed by the Explosive Ordinance Disposal police.

During the reporting week, different groups held protests across the Strip, mainly demanding the release of Palestinian prisoners from Israeli jails or the payment of their salaries. Militant groups in Gaza also staged military parades. On 23 April, the Palestinian Wafi Youth held a sit-in in solidarity with Palestinian people in the Yarmouk refugee camp in Syria.

“The war ruined my life and stole my peace, dignity and stability” 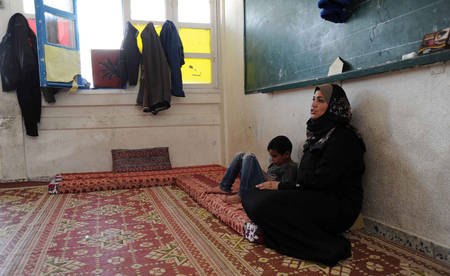 “It is hard to accept that one classroom will be the place where you and your family are expected to sit, eat, play and sleep for an unknown period of time,” said 34-year old Hazar Al Jazar, sitting next to one of her sons on the floor of a classroom in an UNRWA Collective Centre. Gaza. © 2015 UNRWA Photo by Khalil Adwan.

Sitting in a classroom, staffed with only a few kitchen tools, a half-empty shelf and some mattresses spread out on the floor, 34-year old Hazar Abu Jazar recalled the story of her escape during last summer’s conflict from her house in the heavily destroyed neighbourhood of Shujaya to an UNRWA Collective Centre in Rimal, Gaza city.

“The night we fled from our house the sky was full of red lights from the extensive shelling. My children were terrified; we heard the sound of the surrounding explosions, we heard the voices of people in the streets and in the destroyed houses asking for help, but we could not do anything. At first, we did not dare to leave our place,” Hazar said with a voice still shaken by her memories. “But when the shelling became too much we decided to run and left everything behind. Outside, people were running from all directions. Women were barefooted and some were uncovered; children were crying and dead bodies were lying in the streets,” she added.

Hazar, her husband and their six children ultimately reached an UNRWA school that served as a designated emergency shelter for internally displaced persons. They stayed in a classroom together with 45 other members of their extended family for several months.

Living in a crowded classroom was difficult. “It is hard to accept that your whole life and hard work has disappeared in one moment and one classroom will be the place where you and your family are expected to sit, eat, play and sleep for an unknown period of time,” Hazar explained.

“However, the shelter and Collective Centre management team was very patient with us and understood our loss and pain; they also engaged a lot with the children. We all felt like a family because all the residents in the shelter shared similar experiences,” she said, summarising the feeling of unity found in the CC.

Hazar often dreams about moving back to her old house. Yet when she went to check on it together with her husband she could not recognise her neighbourhood: “On the way we were talking about the refrigerator, washing machine and the TV that we had bought recently, hoping that all this equipment would still be there,” the woman recounted. However, when she arrived she realised that was only a dream. “The door of the house was closed as I left it, but when I opened it, there was nothing behind. There was complete emptiness. I remembered our worries about the refrigerator and just started to laugh hysterically, that’s all I could do at that time,” she said.

“I am tired of living in a classroom; I want my life to back. The war ruined my life, stole my peace, my dignity, and my stability,” Hazar said. She and her family are expected to receive transitional shelter cash assistance through UNRWA soon so they can rent a house and resume their life as a normal family again.

On 21 April, one Israeli tank and four bulldozers entered approximately 150 metres into Gaza southeast of Maghazi Camp in the Gaza Middle Area and conducted a clearing operation.