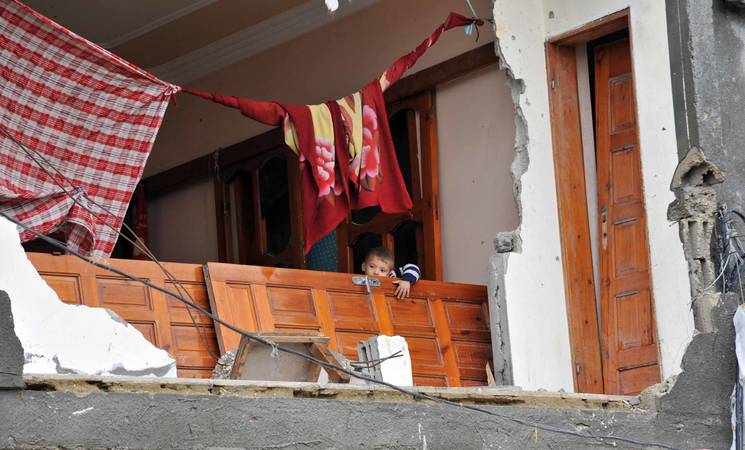 Operational environment: The local political environment remains tense in Gaza. Reports of tension between Hamas-led security services and the Salafist jihadist movement in Gaza continue to mount, according to media reports. The slow reconstruction process adds to the growing frustration of the Gaza population.

The legacy of last summer’s conflict continues to be seen and injuries related to Unexploded Ordinances (UXOs) were again reported this week. On 6 May, two children were injured while playing with UXOs in Gaza City. Detonations of Improvised Explosive Devices (IEDs) decreased during the week, however on 9 May one IED detonated in the Gaza City area; no injuries were reported.

During the reporting week, protests occurred on an almost daily basis with protestors demanding a speedier reconstruction process or emphasizing the upcoming Palestinian commemoration of Al Nabka on 15 May. On 12 May, civil servants hired by the ex de-facto government went on strike across all ministries and public institutions (except schools due to the final exams) to protest the National Consensus Government’s negligence of employee’s rights, according to media reports. Refugee woman Dr. Ghada Al Jadba the recently appointed first female Chief of the UNRWA Health Department, never waited for someone else to draw her path; she drew it herself. “I am a very positive person; serious, well organized and active,” she said when describing her personality.

“Being appointed as Chief of the UNRWA Health Department is not a privilege for me; it is a responsibility,” says the hard-working Doctor who graduated from the University of Tripoli, Libya, in 1995. “As a child I loved doing art; but then I decided to study medicine. Studying the human body and mind is art for me.”

In each of its five fields of operation, UNRWA offers preventive and curative health services to sustain and promote the health of Palestine refugees, from conception through pregnancy, childhood, adolescence and adulthood and active ageing. These services include family planning, pre-conception care, antenatal care and postnatal follow-up, infant care (growth monitoring, medical check-ups and immunizations), school health, oral health, outpatient consultations, diagnostic or laboratory services and the management of chronic non-communicable diseases. UNRWA runs 21 primary Health Centres across the Gaza Strip. In 2014, the Agency recorded an average of 97 patient visits per doctor per day.

When asked how she feels about being the first female Health Chief, she smiles: “I don’t believe in any difference between male and female. I believe in being a team leader, in motivating my staff and in being persistent.”

Chief of Department is not the only hat that Dr. Ghada wears. She is also a mother, and working long hours at the office and thereafter at home is not always easy. “Working long hours does not hinder me from being an excellent mother. Important is not how much time you spend with your children, important is what you do with them and what you say to them when you are with them,” she explains.

Dr. Ghada started her career in the field of health research planning, but she quickly realised that she missed the closeness to the refugee population in Gaza. She then started to work at an UNRWA health clinic in Bureij camp in the middle of the Gaza Strip in 2003 to directly serve the most vulnerable.

Milestones in Dr. Ghada’s career include becoming a Senior Medical Officer, then an Area Health Officer and ultimately the Chief of the UNRWA Health Department in April 2015. Under her leadership as Area Health Officer, the Agency was able for the first time to create family health teams in Beit Hanoun in northern Gaza and an e-health information system at a clinic in Beach Camp in Gaza City.

When asked about her recipe for a successful career, Dr. Ghada has a three point plan: “Good communication skills, trust in your team and mostly: respect for others,” she said.

Yet Dr. Ghada knows that a successful career also comes with many challenges, especially in Gaza. She knows how difficult it is for a refugee woman trying to find a means to make a decent living under an eight-year blockade; having a long-term career  in this environment is an exception and for many a far-away dream. According to the Palestinian Central Bureau of Statistics, the average unemployment rate for refugee women in 2014 was 57.3 per cent and the overall female unemployment rate 56.9 per cent. UNWRWA tries to mitigate the effects of the economic blockade and promote female employment opportunities through various programmes such as the Young Leadership Programme of the Gender Initiative, Vocational Training Courses or the Job Creation Programme.

Despite these depressing numbers, Dr. Ghada says there is something that can help anyone looking to push through the challenges: passion.

“Believe in yourself and in your potential; you are the only one who can change your life, so don’t wait for someone to help you climb up the mountain. Look deep inside yourself, start at the bottom and go straight up to the top!” is Dr Ghada's message to young female refugees in Gaza.

On 6 May, militants fired a test rocket towards the sea.

On 11 May, one Israeli tank and six bulldozers entered approximately 150 metres into the Gaza area and conducted a clearing operation. They withdrew on the same day.