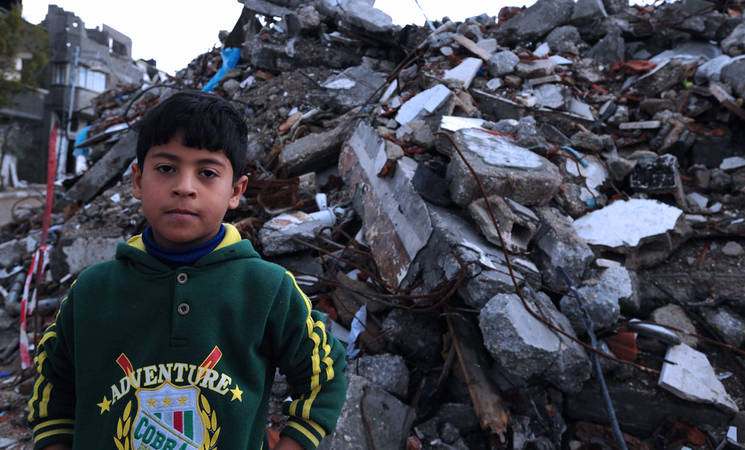 Update on the UNRWA shelter programme

Operational environment: Desperation, deprivation and devastation still dominate the Gaza Strip. Whatever hope for change had been left among Gaza residents is dwindling fast; the reconstruction process, as well as the pace of political progress, is too slow. Changes in the eight-year long blockade regime remain completely inadequate. Improvements in the political or economic spheres in the coming months are unlikely unless there is a real change in the behaviour of the relevant and responsible political actors on both sides. The situation in Gaza – the suffering of the people - is not an unchangeable humanitarian tragedy, but the concrete result of inapt political decisions. “If political actors do not show willingness for a comprehensive peace agreement, despair and poverty in Gaza could soon lead to a renewed conflict in Gaza”, warns the former US president Jimmy Carter in an article in the Foreign Policy magazine.

Over 7,000 explosive remnants of war are left in Gaza since the last conflict and they keep causing injuries and damage. On 13 May an Unexploded Ordnance (UXO) injured two persons in the Gaza area. One day later a UXO detonated in northern Gaza while an Explosive Ordnance Disposal (EOD) team was trying to defuse it. 74 persons were injured in the explosion and severe damage to Palestinian properties in the area was reported.

On 15 May an UNRWA staff member in the UNRWA Collective Centre in Khan Younis in southern Gaza was physically assaulted by internally displaced persons (IDPs) residing in the shelter as a consequence of a dispute between two IDP families. During the reporting week, several other incidents of intercommunal violence were reported.

Regular protests continued during the reporting week, with different factions and groups mostly gathering to commemorate the 67th anniversary of Al Nakba; on 15 May the Intifada Youth Coalition held such as demonstration in the east of Gaza city near the security fence. Israeli troops opened fire and tear gas canisters towards the protestors. Three injuries were reported. 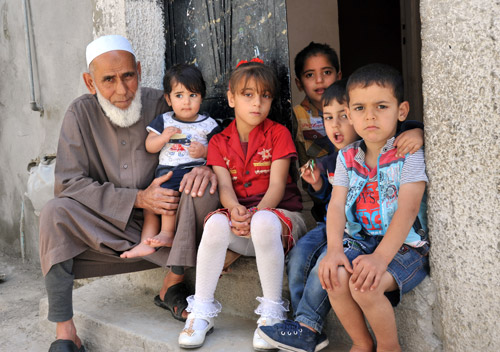 73-year old Khalil Hassan Sorour with his grandchildren in front of their house in Jabalia,  Gaza. © 2015 UNRWA Photo by Khalil Adwan

Khalil Hassan Sorour, a father of ten living in Jabalia, northern Gaza, was six years old when his place of origin, Al Majdal Asqalan [today Ashkelon in Israel], was bombed by Israeli airplanes in 1948 at the beginning of the ‘Nakba’*. “My father was taking me to register in the school when we suddenly heard the sound of the explosions,” the 73-year old man recalled.

“People were scared and everyone left their house and ran, but everyone also assumed this would just be for a matter of days and then they would be able to go back,” he explained. “People then were very simple and naïve; all they cared about was their family life and farming. They knew nothing about politics. For them, the war came very quickly and as a complete surprise,” he summarized.

Khalil Sorour had fled with his family to Jabalia in today’s northern Gaza were another refugee family hosted them for a few weeks until their journey would continue. “We moved from one place to another; I remember in 1952 we were still living in tents close to the beach. The big waves repeatedly flooded all the tents, it was scary, but there was no space since all the mosques and schools were already overloaded with refugees,” he said.

Khalil’s father never overcame the loss of his homeland and refused to buy a new house and settle down in Gaza. “We all felt like strangers in Gaza. This was not our homeland. We were forced to leave, we were uprooted,” Khalil said, and he added: “I have the urge to recall these memories of our displacement all the time to keep the fire in my heart alive. Otherwise, our history is lost.”

In 1949 UNRWA was founded to provide relief to 700,000 newly-displaced Palestine refugees, most of whom thought they would return to their homes and homeland soon. The UNRWA mandate was set to expire in one year. 65 years later the Agency has provided assistance to four generations of Palestine refugees whose rights are still denied. The absence of a just solution for Palestine refugees is a source of international shame. In the Gaza Strip, repeated armed conflicts, political unwillingness and deadlock and the tight economic blockade now in its eight year together with a continuous lack of funding render the Agency’s mandate increasingly difficult.

*’Nakba’ is the Arabic word for ‘catastrophe’ and refers to the establishment of the state of Israel in 1948 and the accompanied displacement of hundreds of thousands of Palestinians from their homeland.

During the reporting week, Israeli forces fired towards Palestinians near the fence with Israel or at Palestinian boats almost on a daily basis. On 15 May one Palestinian was injured by Israeli troops while approaching the security fence in the Khuza’a area in the Gaza Middle Area. On 17 and 19 May the Egyptian navy fired at Palestinian boats forcing them towards north.

The Rafah Crossing remained closed from 12 to 19 May. The crossing was last opened for two days on 9 and 10 March after a continuous closure of 45 days.
The Erez crossing was open for National ID holders (humanitarian cases, medical cases, merchants and UN staff) and for international staff from 12 to 14 May and from 17 to 19 May. On 15 May, Erez crossing was open for pedestrians only. It was closed on 2 May.
Kerem Shalom was open between 12 to 14 May and 17 to 19 May. It was closed on 15 and 16 May.