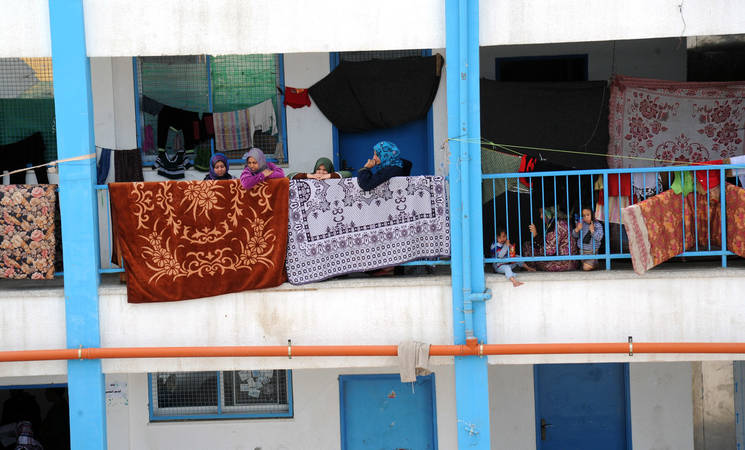 Operational environment: Gaza’s economy is devastated, due to the blockade and repeated armed conflicts. The Gaza Strip only exists through external funding; 80 per cent of the population are dependent on aid, according to the World Bank. General observations are that the coping mechanisms of a people locked in a 365km2 enclave have been depleted; the level of anger continues to rise. People in Gaza don’t want aid, they want dignity and freedom. The sense of imprisonment imposed by the Israeli blockade since 2007 has been made worse through restrictions imposed by Egyptian authorities on the Rafah crossing. The Border and Crossing Authority in Gaza estimates that over 30,000 people registered as humanitarian cases are on a waiting list to cross into Egypt. On 27 May, an elderly Palestinian woman reportedly died after having waited for long hours in the heat at Rafah crossing to pass into the Gaza Strip.

Reports on the 2014 conflict by various organizations, continue to surface. During the past week, the international human rights organization Amnesty International released a report called “‘Strangling Necks’ – Abductions, torture and summary killings of Palestinians by Hamas forces during the 2014 Gaza/Israel conflict” in which it accuses Hamas forces of serious human rights abuses against Palestinians accused of collaborating with Israel. The report highlights extrajudicial executions of at least 23 Palestinians and the arrest and torture of dozens of others; it also includes testimonies. Hamas forces rejected the report as politicized and biased, according to media reports.

On 27 May a militant was injured while dealing with an Improvised Explosive Device (IED) in his house in Khan Younis area. On 31 May unknown persons detonated an IED in Kahn Younis, causing damage to a shop but no injuries.

Daily protests continued during the reporting week. Families of orphans regularly held sit-ins in front of the Bank of Palestine branches across the Gaza Strip demanding payment of their monthly cash assistance. On 30 May different factions held a rally at Gaza seaport to commemorate the 5th anniversary of the Gaza Freedom Flotilla.

On 28 May, UNRWA refugee students completed their last exams for the 2014/15 school year and are ready for their three months of summer holidays. While for many other children in the world, summer holidays means departing to foreign countries with their family, the options for Gaza’s children are limited due to the Israeli imposed blockade. In addition, many of them still carry difficult memories of last summer’s holidays– a summer shattered by a 50-day long conflict that caused unprecedented devastation, killing 548 children and displacing thousands more.

“When our neighbourhood in Bureij was shelled, my family first fled to Nuseirat and then to southern Rafah, but it was not secure there either, so we started to walk to the centre of Rafah city – we walked 7 km under artillery fire and I saw many dead bodies on the way. A few days later we fled further north to Khan Younis and stayed with relatives,” recalls 15-year old Yara Eid who has just finished her last exams in the Preparatory Girls School A in Bureij Camp in central Gaza.

Yara, who during the summer holidays wants to improve her English and Science skills, “write a lot of poetry” and attend the UNRWA Summer Fun Weeks at the end of July, tries to keep up her hopes. “In my future, I want to be able to travel and see the world. And I want to become a doctor. In Gaza we need help, but we also have to help ourselves and this is what I want to do,” she said emphatically.

15-year old Abdel Hakim Awad, also from Bureij Camp, agrees and has very similar plans for the summer. “The more I study, the more I will be able to contribute to our society,” he explains. Living with his family in their damaged home since the end of the conflict, Abdel worries mostly about his friends:  “This summer is not like summers before the conflict. A lot of my friends will have to help repairing the houses of their families; and many still suffer from their war memories and they need psycho-social support,” he explains. “This is why the UNRWA Summer Fun Weeks are so important; they give refugee children a chance to enjoy a normal holiday and help to relieve their suffering,” Abdel adds.

While the resilience of Yara and Abdel is admirable, it is wrong to assume it is indefinite. Gaza’s children continue to suffer, and there is no guarantee that they will be able to keep up their hopes for a better future forever.

“If I could leave, I would go to Paris,” said Abdel. “Even just for one day. It must be beautiful. I have seen it in pictures.”

The blockade imposed on Gaza by Israel enters its ninth year in June 2015. If the blockade is not lifted soon, a whole generation of children will not have any memory of a life outside of confinement.