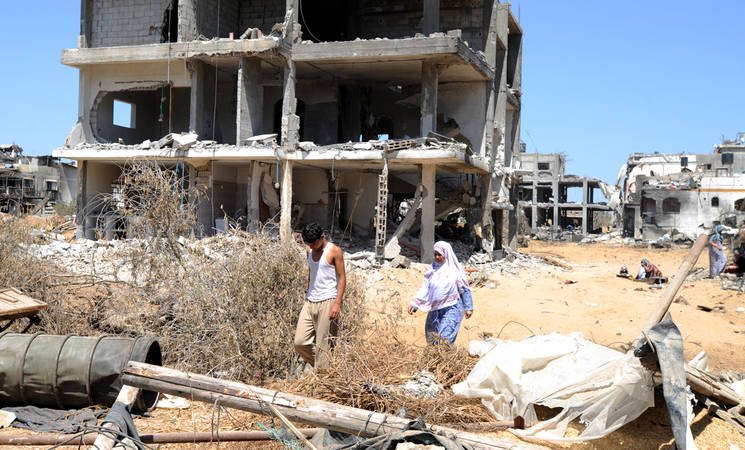 - 85 per cent of all short term international personnel will be separated in a phased process which will last until the end of September: 35 per cent will see their contracts end in the coming four weeks, and 50 per cent will end by 30 September without further extension or renewal.

- The introduction of Exceptional Voluntary Separation (EVS), which provides staff who qualify with the choice to voluntarily separate from the Agency before the age of retirement.

These initiatives, which come in response to the dire financial situation faced by the Agency, go beyond the austerity measures and are part of a series of steps to bring down internal costs while ensuring the delivery of services to Palestine refugees. While UNRWA is fully determined and capable of delivering its core services, at present, funding is sufficient only until the month of September.

Operational environment: Gaza’s reconstruction is moving at a “snail’s pace”, said incoming chief of the Programme of Assistance to the Palestinian People under the United Nations Development Programme (UNDP), Robert Valent, to the media. At this pace the reconstruction of Gaza will likely take more than 30 years, he furthermore stated, and he called for Israel to not ease, but lift access restrictions on the Gaza Strip. The blockade on Gaza was trying to be breached by the third international Freedom Flotilla, yet media report that one of the four vessels had already been intercepted by the Israeli navy and was peacefully redirected to the port of Ashdod in Israel on 29 June. The vessel was carrying the former Tunisian President Moncef Marzouki and 17 other activists.

Israel has revoked the entry permits of 500 Palestinians from Gaza to attend prayers in Jerusalem during Ramadan, reportedly due to a rocket that was launched on 23 June from Gaza and landed in an open area in southern Israel.

Regular protests took place during the week, mostly in support of the Freedom Flotilla III and for a lifting of the blockade on Gaza; protestors also demanded the release of Islamic Jihad prisoner Khader Adnan who has been on hunger strike for 55 days in an Israeli prison and will be released on 12 July. 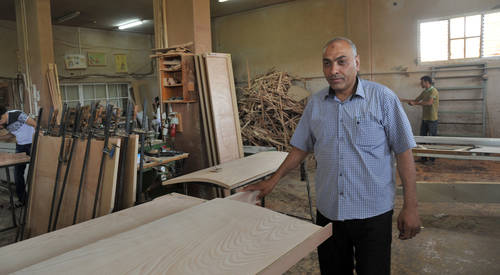 Manager Mujahed Mahmoud Al Sosi is contemplating the work of his employees in his furniture factory in Jabalia, northern Gaza. © UNRWA 2015 Photo by Khalil Adwan

In the first floor of a beige, tall building in the Jabalia neighbourhood in northern Gaza, Mujahed Mahmoud Al Sosi sits behind a small desk full of piled papers and notepads; a map of the Middle East decorates the wall, next to a selection of different fabrics – from claret-red to salmon pink or marine blue. The Al Sosi company was once one of Gaza’s bustling trade companies, exporting the famous high-quality Sosi furniture to Israel and from there to Europe. Yet in 2007 Israel enforced its blockade on Gaza and Mujahed’s business started to crumble. While before 2006 he employed between 150 and 170 laboureres on a full time basis, today only a fraction of around 30 (or 20 per cent) remains – and there were times where this number decreased even to only 20 labourers on a part time basis.

“Nine years of blockade made it extremely difficult for companies and businessmen in Gaza to survive; the future of labourers, their dreams and families, are in a precarious situation,” commented the 49-old manager, himself a father of six, who struggles to keep the Sosi company running and competing for the small Gaza market with other furniture producing companies.

UNRWA tries to ease the adverse effects of the blockade through various programmes, for example through the large-scale (cash-for-work) Job Creation Programme (JCP) through which the Agency provides short-term employment opportunities for refugees to inject urgently needed cash into the economy. Since May 2013, 9 skilled and 12 unskilled JCP workers have been placed in the Sosi factory and the benefit is two-fold: while the company profits from subsidized labour that helps it survive in these difficult times, the JCP workers are able to greatly improve their skills which raises their chances in the highly-competitive Gaza job market. Currently, the Sosi factory still employs 4 JCPs whose contracts came to an end.

In 2014, UNRWA injected a total US$ 18.1 million into the economy through the JCP and almost 120,000 refugees benefited from the programme through the provision of 20,545 JCP positions.

Israeli forces shot at Palestinians near the security fence or at Palestinian boats almost on a daily basis. On 22 June two Palestinians were injured by Israeli fire in Khuza’a in the Gaza Middle Area.

On 23 June militants fired one rocket towards Israel; the rocket exploded in an open area southwest of Ashkelon. On 24 June Israeli aircraft fired one missile targeting the rocket launcher site. No injuries were reported in both incidents.