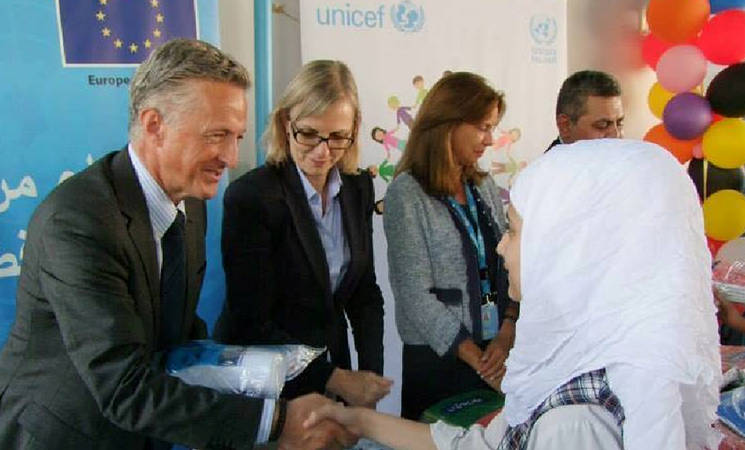 Conflict is increasingly encroaching on UNRWA camps with shelling and clashes continuing to take place in and nearby a number of them. A reported 4 Palestine Refugees (PR) were killed in the last 2 weeks as a result. UNRWA estimates over 50% of registered PR are displaced in Syria or in neighbouring countries.

UNRWA is sheltering 8,291 (-215 from the previous report) displaced PR and Syrians in 18 Agency facilities in Syria. 86% of these, 7,130 are PR (see table 1). There has been a slight decline in the number of PR and Syrian IDPs in UNRWA shelters since August but it remains well over 8,000. A further 3,946 (-22 from the previous report) PR are being sheltered in 14 non-UNRWA facilities in Damascus, Aleppo and Latakia. Nearly 18,000 PR have been identified or approached UNRWA having fled from other areas:

UNRWA is activating a number of emergency preparedness measures including identifying space for potential additional temporary collective shelters; increasing security at its facilities where possible; contingency plans for business continuity; establishing a warden system for staff; prepositioning medical supplies and equipment, food and NFIs including construction of additional storage facilities; advancing distributions and additional coordination with the Agency’s other field offices;

UNRWA financed 444 microfinance loans in September valued at SYP 15.93 million, with 131 loans financed in Tartous, 125 in Latakia, 125 in Sweyda and 63 financed in Damascus. Newly established branch offices in Latakia, Tartous and Sweyda are increasing the outreach of the programme.

Survey completed on the impact of the crisis on the living conditions of the microfinance clients, their households and enterprises. The first in a series of quarterly reports on socioeconomic conditions in Syria, funded by the European Union (EU) and contracted from the Syrian Centre for Policy Research was published online. Find the report at http://unrwa.org/userfiles/2013071244355.pdf

Graph 1: UNRWA food and cash distributions in Syria cumulative since March 2011 as of 06 October 2013 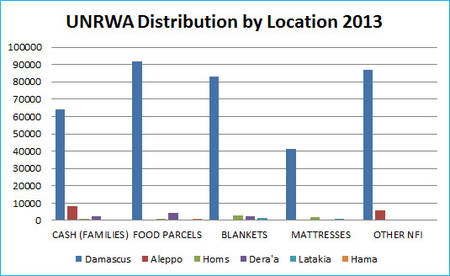 6,678 PRS children attending UNRWA schools in this new school year. 81% are attending special classes for PRS and 19% are integrated into UNRWAs regular classes for PR in Lebanon. 200 additional teaching staff have been recruited and trained as well as psycho-social counselors. Back to school kits and textbooks were distributed to all PRS students. UNRWA is actively encouraging parents to enrol their children in school and has prepared a strategy for both the continuing education needs of those who are currently enrolled as well as newcomers.

PRS in Nablus Preparatory School for Girls in Saida, Lebanon receive back to school kits from representatives of EU, UNRWA and UNICEF.

See the link for information on the back to school activities in Lebanon: /newsroom/press-releases/back-school-lebanon-unrwa-unicef-and-eu

Continue to deliver medical consultations and medications through UNRWAs 28 health centres which covers 50% of tertiary emergency and life-saving conditions. Responded to an outbreak of diarrhoel disease in PRS Qarameh gathering, adjacent to Ein el Hilweh Palestine camp from 12-14 September that claimed the lives of two children. In cooperation with Oxfam, UNICEF and Popular Aid for Relief and Development (PARD) UNRWA undertook a coordinated rapid emergency response to prevent the further spread of the disease and to improve hygiene conditions.

Preparation of winterization activities scheduled to be implemented from November 2013-March 2014, preparing and planning for winter NFI distributions. ATM cards distributed to approximately 13,000 PRS families across Lebanon in preparation for cash distributions from 2-9 October. LBP50,000  $33) per person will be credited to the cards on these dates and during the same period families of 1 to 4 members will also receive LBP 200,000 ($133) and  families of 4 and more members LBP 300,000 ($200) for housing assistance. 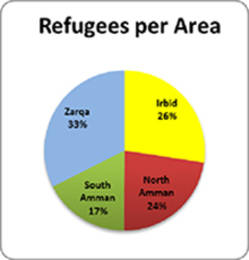 52% are female and 30% are female-headed households. 48% under the age of 18 and the average family size is 4.1. Most reside in communities with host families or in rental premises mainly in Irbid, Zarqa and Amman. 196 reside in Cyber City, the government appointed facility in Irbid.

57% of PRS have Jordanian nationality/documentation; 22% Palestinian; and 20% Syrian. 80% hold passports or travel documents but 1.4% have no documentation.

The majority (98%) come from 3 Syrian governorates: Rural Damascus (41%), Damascus City (36%) and Dera’a (21%). A large number are assessed to live in abject poverty. Their precarious legal status means they face difficulties in relation to civil processes and access to services and employment.

Education: Approximately 927 PRS children have enrolled in UNRWA schools in Jordan since the start of this school year, with an increase of 127 in the last 2 weeks.

Health: Continuing to provide free primary health care to PRS in all UNRWA clinics and referrals with full coverage to government hospitals. Caseworkers continue to refer PRS with psychosocial problems. So far in 2013 PRS have made 12,598 free consultations. 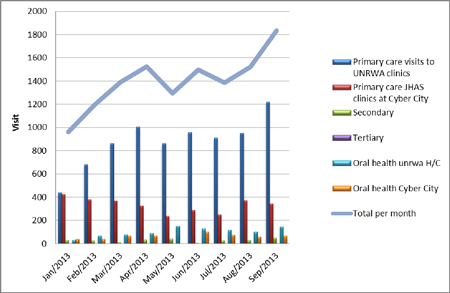 Funding: UNRWA has appealed for USD 7.1 m to provide humanitarian assistance and protection for up to 10,000 PRS in Jordan in 2013. The Agency has received pledges or contributions for USD 4.7 m from US, Japan, Kuwait, DFID, EU - OCHA (ERF & CERF) and ECHO, SDC and Belgium. The funding rate is currently 66%.

Damascus / Rif Damascus: In the East sporadic and intermittent clashes and shelling continued around Barzeh, Jobar and Qaboun with continuing extensive security force operations in the areas. This became intensive at the end of the reporting period with reports of an explosion in Jobar and intermittent hostilities continued in adjacent areas of Zamalka and Eastern Ghouta.

In the South, intermittent and sporadic clashes and shelling continued in and around the camps of Yarmouk, Sbeineh, Douma and Qabr Essit although Ramadan was relatively calm.1 PR was reportedly killed in Yarmouk due to hostilities and some shells impacted in Sbeineh but without related casualties.

Sporadic clashes and shelling continued in the southwest including around Darayya, Moadhamiyeh and Khan Eshieh accompanied with extensive security force operations around Darayya and Moadhamiyeh. The main roads to the areas remained cut off or blocked by the security forces. Two PR were reportedly killed in Darayya due to the hostilities. Shells impacted in Khan Eshieh camp on a number of days and one PR reportedly died as a result.

Aleppo: Intensive clashes and shelling in the city at the beginning of the reporting period centred around Bustan Al Qaser became varyingly sporadic and calm for the rest of the period. Ein El Tal: A reported 30 families have returned to the camp but it otherwise remains deserted and occupied by armed opposition groups with the main road to the camp blocked. Nevertheless, it remained relatively calm. Neirab camp and surrounding areas remained relatively calm as in previous weeks with all facilities operational.

Dera’a: Intensive clashes and shelling early in the period in areas surrounding the camp of Al Mahata and Dera’a Al Balad became sporadic for the rest of the period. All facilities operational as usual. Mzerieb: Varying from relatively calm to sporadic clashes throughout the reporting period in the vicinity of the village. All facilities operational throughout. Jillien remained mostly relatively calm throughout the period with occasional sporadic clashes and shelling in the vicinity of the village. The main road is still blocked but the village remains accessible from side roads.

Table 1: Number of PR and Syrian IDPs in UNRWA facilities as of 6 October 2013 showing variation (in brackets) with last update Issue 60

The number of displaced PR and Syrian IDPs in UNRWA facilities in Syria decreased by 215 from the previous update report (Issue 60) with the largest decreases in Khan Eshieh (-129) in Damascus and Latakia (-141). A smaller decrease was recorded in Al Qaboun in Damascus (-34). Three camps in Damascus saw small increases: DTC (+23), Mezzah (+56) and Rukn Eddin (+10). All other UNRWA facilities saw no change. This shows a slight decline in numbers as in previous weeks as shown below. 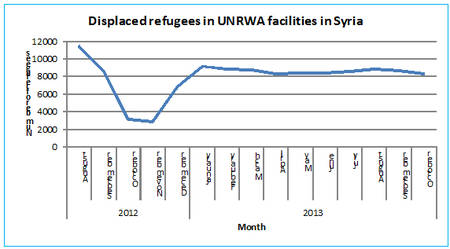