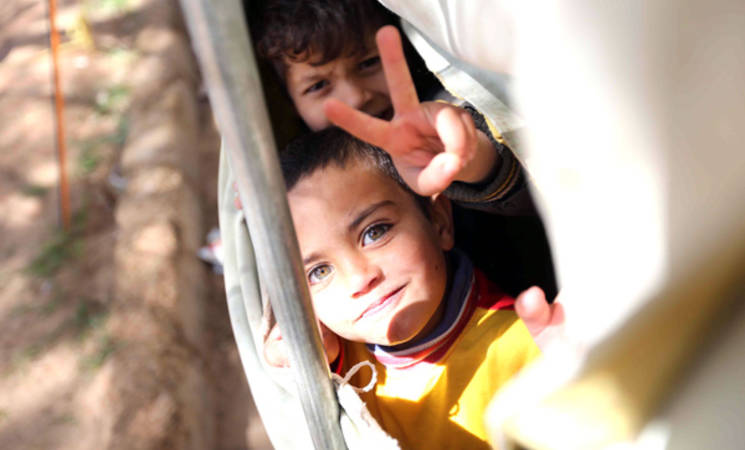 Conflict is increasingly encroaching on UNRWA camps with shelling and clashes continuing to take place in and nearby a number of them. A reported 17 Palestine Refugees (PR) were killed in the last 2 weeks as a result. UNRWA estimates over 50% of registered PR are displaced in Syria or in neighbouring countries.

UNRWA is sheltering 8,100 (-172 from the previous report) displaced PR and Syrians in 18 Agency facilities in Syria. 85% of these, 6,885 are PR (see table 1). There has been a slight decline in the number of PR and Syrian IDPs in UNRWA facilities since August but it remains just over 8,000. A further 3,307 (-216 from the previous report) PR are being sheltered in 13 non-UNRWA facilities in Damascus, Aleppo and Latakia. Nearly 18,000 PR have been identified or approached UNRWA having fled from other areas:

Financed 444 microfinance loans in September valued at SYP 15.93 million (131 in Tartous, 125 in Latakia, 125 in Sweyda and 63 in Damascus). Newly established branch offices in Latakia, Tartous and Sweyda are increasing the outreach of the programme.

Survey completed on the impact of the crisis on the living conditions of the microfinance clients, their households and enterprises. The first in a series of quarterly reports on socioeconomic conditions in Syria, funded by the European Union (EU) and contracted from the Syrian Centre for Policy Research was published online. Find the report at http://unrwa.org/userfiles/2013071244355.pdf

Graph 1: UNRWA food and cash distributions in Syria cumulative since March 2011 as of 11 November 2013 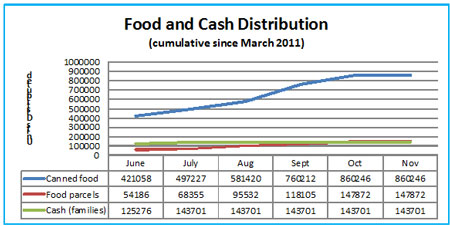 52% of PRS live in UNRWA camps and the rest live in private rented accommodation or informal gatherings.

Education: 7,216 PRS children are attending UNRWA schools. The majority are attending special classes for PRS focusing on subjects including Arabic, English and maths as well as recreational activities and some are integrated in UNRWAs regular classes for PR in Lebanon. A new special centre has been opened in Tyre to accommodate the additional students and 310 additional teaching staff have been recruited and trained as well as psycho-social counselors. Additional back to school kits were distributed to all PRS students. Continuing to actively encourage PRS parents to enrol their children in school.

Health: Continue to deliver medical consultations and medication through 27 health centres. Covering primary health and 50% of secondary and tertiary hospitalisation for emergency and life-saving conditions, with 50% being covered by NGO partners. Introduced an Emergency Room Service for PRS at contracted secondary care hospitals where UNRWA will cover all costs. PRS patients suffering from critical health conditions also supported through a CARE programme which provides additional support for PRS to cover medical bills including hospitalisation, medication and treatment including for cancer.

Protection: Continue to monitor and offer advice and assistance to PRS crossing at the border and advocate with Lebanese Government for equal treatment of all refugees at the border

Finalised winterization package and planning to distribute to up to 60,000 PRS by end March 2014.

Funding: 86% of the $65 million Syria crisis appeal for 2013 has been received or committed from donors including EU, US, Germany, Kuwait, Japan, France, OCHA, Italy, Australia, UNICEF, Norway, Ireland, SDC, QRCS, US friends of UNRWA, Iceland, Hungary and an in-kind donation from Sweden.

10,166 PRS are recorded with UNRWA in Jordan

They receive relief, education, health and protection services. There has been an average 560 new PRS registered per month since April 2013. A headcount will be conducted to confirm the PRS numbers.

Most reside in communities with host families or in rental premises mainly in Irbid, Zarqa and Amman. 186 reside in Cyber City, the government appointed facility in Irbid. A large number are assessed to live in abject poverty. Their precarious legal status means they face difficulties in relation to civil processes and access to services and employment. 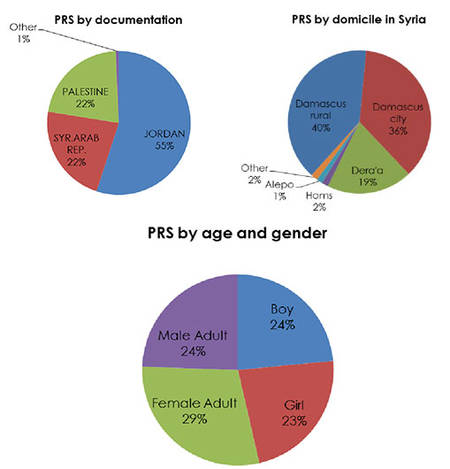 Education: 1,713 displaced PRS children continue their education from grade 1 to 10 in UNRWA schools and 52% are girls. 1,188 PRS children are also reportedly enrolled in Government or private schools. UNRWA will continue its outreach with the PRS community and identify ways to encourage families to enroll their children in schools. UNRWA also started providing technical and vocational education opportunities to PRS youth. 15 PRS youth are following courses in UNRWA’s technical training centers and teacher training institute in information technology, financial management and teaching. Relief: Distributed approx. USD 1.9m in over 30,000 payments to PRS in 2013. 8,681 PRS have received at least 1 round of cash assistance. 6,747 have received 1 or more installment depending on their arrival date. 260 PRS have received an urgent cash assistance to address a specific shock or critical need. Food distribution stopped in September and will be replaced by cash entitlement of that value and a cash entitlement to cover NFIs. Delays in receiving donor funding has delayed distributions in October.

Health: Continuing to provide free primary health care to PRS in all UNRWA clinics and referrals with full coverage to government hospitals. Caseworkers continue to refer PRS with psychosocial problems. So far in 2013 PRS have made 14,125 free consultations.

Sporadic clashes and shelling at the beginning of the period continued around Barzeh, Jobar and Qaboun and adjacent areas of Zamalka and Eastern Ghouta intensifying to intermittent in the middle of the period. Most UNRWA facilities remain closed in the areas except 2 schools housing IDPs in Qaboun.

Sporadic and intermittent clashes and shelling continued in the southwest including around Darayya, Moadhamiyeh and Khan Eshieh around the same levels as in previous weeks. Shells continued to impact in Khan Eshieh but less than in previous weeks and with no reported PR deaths as a result. The main roads to the areas remained cut off or blocked by the security forces.

Aleppo: Intensive clashes and shelling in the city at the beginning of the reporting period continuing to centre around Bustan Al Qaser with mortars landing close to the area office. This subsided to intermittent for the remaining period showing no large change with previous reporting periods.

Ein El Tal: A reported 30 families have returned to the camp but it otherwise remains deserted and occupied by armed opposition groups with the main road to the camp blocked. It remained relatively calm as in previous reporting periods until the end of the period when 3 mortars reportedly impacted in the camp accompanied with clashes in the camp. Neirab camp and surrounding areas remained relatively calm as in previous weeks with all facilities operational. However, reports were received of PR injured by gunshots presumably from snipers while traveling on the road to Aleppo.

Dera’a: Varying sporadic and intensive clashes and shelling in the period including in the vicinity of the camp. Reports of shells regularly impacting in the camp daily with 2 PR and 1 civilian killed as a result and a number injured. Reports of an accompanying airstrike in the middle of the period. The hostilities and number killed was a reduction on previous weeks. Mzerieb: Relatively calm for most of the reporting period and all facilities operational as in previous reports. Jillien remained mostly relatively calm as in previous weeks with some sporadic shelling in surrounding areas. The main road to the village remains blocked it remains accessible from side roads.

Table 1: Number of PR and Syrian IDPs in UNRWA facilities as of 3 November 2013 showing variation (in brackets) with last update Issue 62

The number of displaced PR and Syrian IDPs in UNRWA facilities in Syria overall decreased by 172 from the previous update report Issue 62. There was a large decrease in the DTC of 232 and small increases in Khan Eshieh (+7) and Rukn Eddin (+3) all in Damascus. This is in line with a fairly constant trend since August as shown in the graph below.