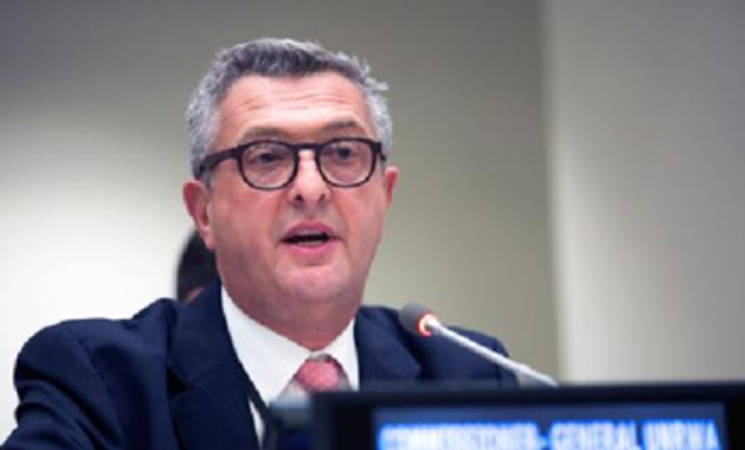 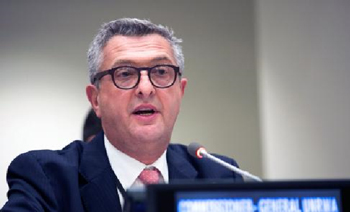 On 6 November UNRWA Commissioner-General, Filippo Grandi, addressed the 4th Committee of the UN General Assembly highlighting the plight of Palestine refugees (PR) in Syria and those displaced from Syria throughout the region. The Commissioner-General called for more funding for the Agency to cope with the unprecedented increased needs of PR as a result throughout its fields of operations including Syria, Lebanon and Jordan.

The Commissioner-General highlighted UNRWA’s grave concern “about the Palestinian camps and communities that for many months have remained out of reach” in Syria (see Yarmouk below) and called on the Committee “to join UNRWA to condemn in the strongest terms the profound suffering being endured by civilians trapped in these situations and to appeal to the Syrian authorities and all other parties to allow Palestinian civilians – wherever they live in Syria – the full spectrum of protection to which they are entitled”. See /newsroom/official-statements/statement-filippo-grandi-commissioner-general-unrwa-fourth-committee

The Commissioner-General reiterated these comments at UNRWAs Advisory Commission on 18 November appealing to everyone “not to forget that the Syria crisis has - among many others - a Palestinian dimension which needs special attention and funding, because a second dispossession brings human suffering, but also risks changing the geography of Palestinian exile, complicating further the search for a solution to the overall Palestine refugee question, and this in parallel to the new, massive refugee crisis”. In addition, “Clearly, the plight of civilians in Syria will only cease when fighting stops and a political solution is found. But more efforts, meanwhile, must be made to protect them.” See /newsroom/official-statements/statement-filippo-grandi-commissioner-general-unrwa-opening-session

Conflict is increasingly encroaching on UNRWA camps with shelling and clashes continuing to take place in and nearby them. A reported 29 Palestine Refugees (PR) were killed in the last 2 weeks as a result. UNRWA estimates over 50% of registered PR are displaced in Syria or in neighbouring countries.

UNRWA is sheltering 7,983 (-117 from the previous report) displaced PR and Syrians in 18 Agency facilities in Syria of which 84%, 6,706 are PR (see table 1). There has been a slow decline in the number of PR and Syrian IDPs in UNRWA facilities since August. A further 3,649 (-342 from the previous report) PR are being sheltered in 13 non-UNRWA facilities in Damascus, Aleppo and Latakia. Nearly 18,000 PR have been identified by UNRWA in Hama, Homs and Latakia having fled from Damascus and Aleppo.

Financed 444 microfinance loans in September valued at SYP 15.93 million (131 in Tartous, 125 in Latakia, 125 in Sweyda and 63 in Damascus). Newly established branch offices in Latakia, Tartous and Sweyda are increasing the outreach of the programme.

Survey completed on the impact of the crisis on the living conditions of the microfinance clients, their households and enterprises. The second in a series of quarterly reports on socioeconomic conditions in Syria, funded by the EU published online at /resources/reports/war-development-socioeconomic-monitoring-report-syria

Graph 1: UNRWA food and cash distributions in Syria cumulative since March 2011 as of 17 November 2013 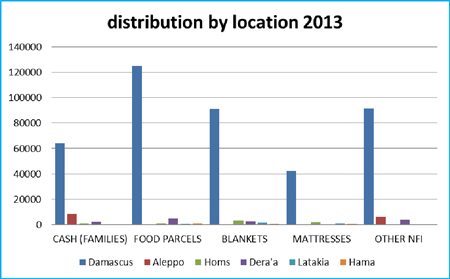 50,300 PRS registered with UNRWA in Lebanon

32% are in Saida, 19% in Tyre, 17% in central Lebanon and 16% each in northern Lebanon and Beqaa. 52% live in UNRWA camps and the rest live in private rented accommodation or informal gatherings.

Education: 7,220 PRS children are attending UNRWA schools: 85% are attending special classes for PRS including recreational activities and 15% are integrated in UNRWAs regular classes for PR in Lebanon. A new centre was opened to accommodate more students and 310 more teaching staff and psychosocial counselors were recruited. Continuing to encourage PRS parents to enrol their children in school. 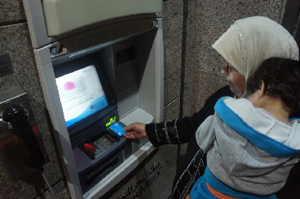 Relief: Over 14,400 ATM cards distributed to PRS across Lebanon. 13,000 PRS families have received cash assistance through the cards credited with $33 per person and the remainder will receive this by end November.  A joint UNRWA-WFP needs assessment is ongoing and planning for distribution of winterization packages.

Protection: Continuing to monitor and offer advice and assistance to PRS crossing at the border and advocate with Lebanese Government for equal treatment of all refugees at the border. Conducting assessments of unaccompanied and separated minors to prepare referrals where appropriate.

Environmental Health: Continuing to repair water and sewerage systems in PR camps to cope with additional strain from PRS and preparing an environmental health awareness campaign for PRS.

Funding: 94% of the $65 million appeal for 2013 has been received or committed from donors including EU, US, Germany, Kuwait, Japan, France, OCHA, Italy, Australia, UNICEF, Norway, Ireland, SDC, Qatar Red Crescent Society, US Friends of UNRWA, Iceland, Hungary and an in-kind donation from Sweden.

10,487 PRS are recorded with UNRWA in Jordan

They receive relief, education, health and protection services. Average 560 new PRS registered per month since April 2013. Most reside in communities with host families or in rental premises in Irbid, Zarqa and Amman. 191 reside in Cyber City government appointed facility in Irbid. A large number live in abject poverty and their precarious legal status creates difficulties for civil processes, access to services and employment. 57% have Jordanian nationality/ documentation, 22% Palestinian and 20% Syria. 1.1% have no documentation. 96% come from three governorates in Syria: Damascus Rural (40%), Damascus city (37%) and Dera’a (19%). 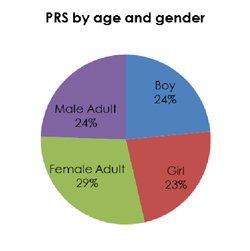 Relief: Transitioned to a “cash only” approach and will start to shift to ATM cash transfer for cash assistance and cash for food and NFIs instead of distributions which ended in September. Distributed USD1.9m in over 30,000 payments to PRS in 2013. 6,747 PRS have received 1 or more installment depending on their arrival date. 260 PRS have received an urgent cash assistance to address a specific shock or critical need. Delays in receiving donor funding is affecting scheduled distributions. Renovating three floors of Cyber City facility including bathrooms and electricity.

Health: Continuing to provide free primary health care to PRS in all 24 UNRWA clinics across Jordan and referrals with full coverage to government hospitals. Caseworkers continue to refer PRS with psychosocial problems. So far in 2013 PRS have made 14,125 free consultations. 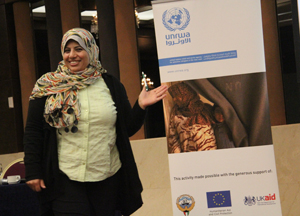 Outreach materials for PRS in Jordan produced including nearly 10,000 brochures outlining how to access UNRWA services and durable cards with protection hotline contact number. They will be distributed in the coming weeks.

Funding: PRS response plan for Jordan is 89% funded by UK, US , OCHA, Switzerland, European Union (EU), Japan, Kuwait and New Zealand. However, delays in processing USD 2.2m of this is impacting assistance.

In the East intermittent to intensive clashes and shelling at the beginning of the period around Barzeh, Jobar and Qaboun and adjacent areas of Zamalka and Eastern Ghouta subsided to intermittent for most of the period, a slight increase on the previous weeks. All UNRWA facilities remain closed in the areas except 2 schools housing IDPs in Qaboun.  A staff member was shot and injured in the area.

In the South, varying sporadic and intermittent clashes and shelling continued in and around the camps of Yarmouk, Sbeineh, Douma and Qabr Essit although Ramadan continued to be relatively calm. Sporadic clashes and shelling continued in Yarmouk throughout the period with 21 PR reportedly killed as a result of the conflict in Yarmouk alone, an increase on previous weeks. Within this, social media reported 2 PR accused of collaborating with the security forces were executed by opposition elements and reports were received 1 PR child may have died due to malnutrition. 1 PR also died in Yalda.

Sporadic and intermittent clashes and shelling continued in the southwest including around Darayya, Moadhamiyeh and Khan Eshieh around the same levels as in previous weeks. Not as many shells impacted in the areas and no PR deaths were reported. The main roads to the areas remained cut off or blocked by the security forces and a staff member and truck transporting food baskets to IDP centres in Khan Eshieh were detained with the truck not released.

Aleppo: Intermittent clashes and shelling at the beginning of the period became intensive continuing through to the end of the period. Mortars landed near UNRWA area office and hostilities remained the same as previous reporting periods. Ein El Tal: A reported 30 families have returned to the camp but it otherwise remains deserted and occupied by armed opposition groups with the main road to the camp blocked. Reports 3 mortars impacted in the camp at the beginning of the period and clashes in the camp allegedly between opposition elements. Otherwise relatively calm. Neirab camp and surrounding areas remained relatively calm as in previous weeks until the end of the period when a shell impacted in the camp, intensive shelling reportedly killed 1 PR and a staff member was injured by shrapnel. All schools were then closed as a result of surrounding hostilities.

Dera’a: Varying sporadic and intensive clashes and shelling in the period including in the vicinity of the camp. Several shells regularly impacted in the camp reportedly killing 7 PR as a result, an increase on previous weeks, and injuring many. A female staff member was also detained by the security forces. Mzerieb: Relatively calm for most of the reporting period and all facilities operational as in previous reports. Jillien remained mostly relatively calm as in previous weeks.

Table 1: Number of PR and Syrian IDPs in UNRWA facilities as of 18 November 2013 showing variation (in brackets) with last update Issue 63

The number of displaced PR and Syrian IDPs in UNRWA facilities in Syria overall decreased by 117 from the previous update report Issue 63. The largest decrease was in Ramadan camp (-119), there was a slight decrease in Jaramana camp and slight increase in Rukn Eddin, all in Damascus. This is in line with a fairly constant trend since August as shown in the graph below. 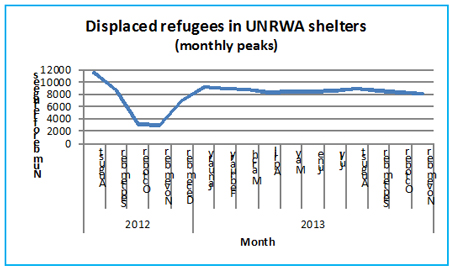