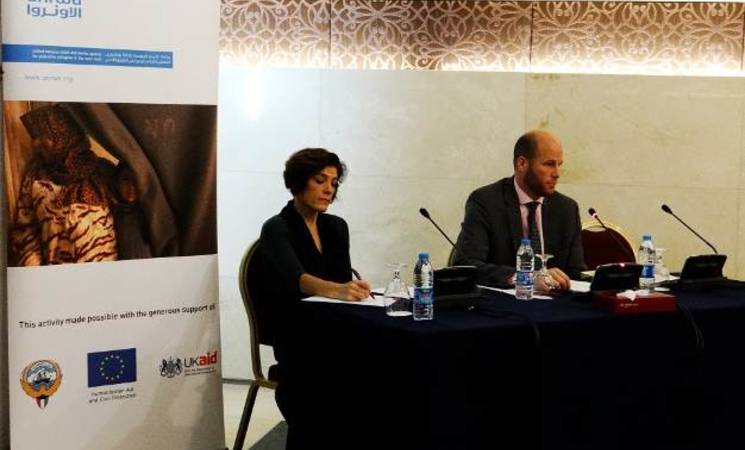 Conflict is increasingly encroaching on UNRWA camps with shelling and clashes continuing to take place in and nearby them. A reported 7 Palestine Refugees (PR) were killed in the last 2 weeks as a result. UNRWA estimates over 50% of registered PR are displaced in Syria or in neighbouring countries.

UNRWA is sheltering 7,659 (-309 from the previous report) displaced PR and Syrians in 18 Agency facilities in Syria of which 83%, 6,357 are PR (see table 1). There has been a slow decline in the number of PR and Syrian IDPs in UNRWA facilities since August. A further 2,554 PR (-252 from the previous report) are being sheltered in 14 non-UNRWA facilities in Damascus, Aleppo and Latakia. Nearly 18,000 PR have been identified by UNRWA in Hama, Homs and Latakia having fled from Damascus and Aleppo.

Over 47,000 PR children enrolled with UNRWA. Over 20,000 attend 42 regular UNRWA schools with 4 of these working on a triple shift, and over 26,000 attend 36 governmental schools the Ministry of Education agreed UNRWA can use in the afternoon where UNRWA schools are damaged or are temporary collective shelters. Conducting maintenance works at these government schools including upgrading toilet units in Damascus.

42 out of 118 UNRWA schools operational, 68 are closed due to damage or insecurity, 8 because they are operating as temporary collective shelters for PR and displaced Syrians. A further 8 are partially hosting displaced PR and Syrians and also operating as schools. 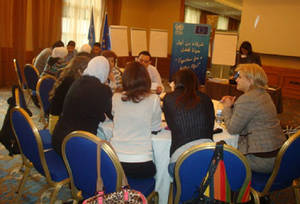 Over 1,750 UNRWA teachers are working as well as 30 psychosocial counsellors who received psychosocial training from 28 November- 1 December. Self-learning materials are being prepared for all grades in coordination with the Ministry of Education and UNICEF. 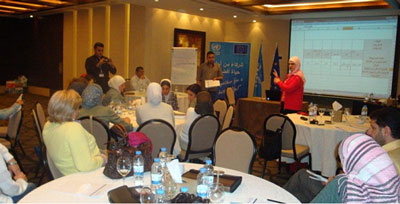 Financed 649 microfinance loans in November valued at SYP 25.68 million (155 in Tartous, 218 in Latakia, 159 in Sweyda and 117 in Damascus). Planning to build the monthly loan disbursements to around 1,350 per month by April 2014 valued at around USD 409,000 each month. Newly established branch offices in Latakia, Tartous and Sweyda are increasing the outreach of the programme. Portfolio at risk is just 0.62%, the lowest of any field.

Wrote-off 6,587 loans in 2013 with bad debt but 16% of the bad loans were closed and 22% of the value of the debts were collected. A study undertaken on clients who were active in the programme in December 2012 showed 71% had been displaced with highest displacement in Yarmouk where 89% of clients were displaced. 40% of clients had their enterprises looted or stolen, 31% closed their businesses permanently and 13% temporarily. By June 2013 only 13% of businesses remained active.

The second in a series of quarterly reports on socioeconomic conditions in Syria, funded by the EU is published online at /resources/reports/war-development-socioeconomic-monitoring-report-syria

Graph 1: UNRWA food and cash distributions in Syria cumulative since March 2011 as of 11 December 2013 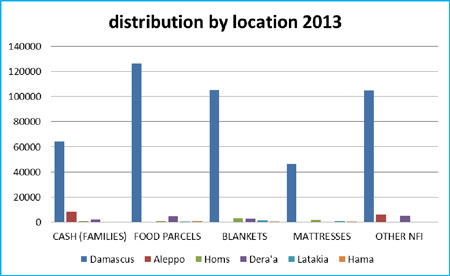 50,800 PRS registered with UNRWA in Lebanon

32% are in Saida, 19% in Tyre, 18% in central Lebanon and 16% each in northern Lebanon and Beqaa. 52% live in UNRWA camps and the rest live in private rented accommodation or informal gatherings.

Education: 7,300 PRS children are attending UNRWA schools: 86% are attending special classes for PRS including recreational activities and 14% are integrated in UNRWAs regular classes for PR in Lebanon. A new centre was opened to accommodate more students and 310 more teaching staff and psychosocial counselors were recruited. Continuing to encourage PRS parents to enrol their children in school.

Nationwide winterization assistance plan started on 5 December for recorded PRS. This includes additional blankets, clothing and heating with 15,000 PRS families eligible for winterization assistance. UNRWA is covering 100% in Beqaa and Central Lebanon Area and 76% in Tripoli, Saida and Tyre with partners covering the remainder. UNICEF is supporting UNRWA by providing $40 per child for clothing and heating in UNRWAs schools in Beqaa.

Protection: Continuing to monitor and offer advice and assistance to PRS crossing at the border and advocate with Lebanese Government for equal treatment of all refugees at the border. Conducting assessments of unaccompanied and separated minors to prepare referrals where appropriate.

Funding: 94% of the $65 million appeal for 2013 has been received or committed from donors including EU, US, Germany, Kuwait, Japan, France, OCHA, Italy, Australia, UNICEF, Norway, Ireland, SDC, Qatar Red Crescent Society, US Friends of UNRWA, Iceland, Hungary and an in-kind donation from Sweden.

10,687 PRS are recorded with UNRWA in Jordan

They receive relief, education, health and protection services. Average 560 new PRS registered per month since April 2013 and 115 have left Jordan mostly to return to Syria. 98% of PRS reside in communities with host families or in rental premises in Irbid, Zarqa and Amman. 190 reside in Cyber City government appointed facility in Irbid. A large number live in abject poverty and their precarious legal status creates difficulties for civil processes, access to services and employment. 95% come from three governorates in Syria: Damascus Rural, Damascus city and Dera’a.

PRS in Jordan by age, gender and domicile in Syria 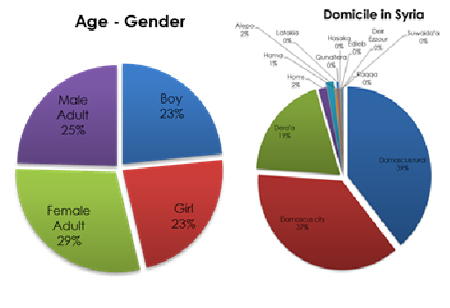 Education: Opened admission to UNRWAs 173 schools across Jordan to PRS and Syrian IDP children residing in 10 official and 3 unofficial PR camps. 1,835 receive education from grades 1 to 10 in UNRWA schools. Providing technical and vocational education opportunities to PRS youth with 15 following courses in UNRWA’s technical training centers and teacher training institute in Jordan. Training for teachers and headteachers in December 2013 on addressing PRS challenges.

Relief: Transitioned to a “cash only” approach and will start to shift to ATM cash transfer for cash, food and NFI assistance instead of distributions which ended in September. Distributed USD 2m in cash assistance to PRS in 2013. 8,544 PRS have received 1 or more installment depending on their arrival date. 901 PRS have also received an urgent cash assistance payment to address a specific shock or critical need. Delays in receiving/ processing donor funding continue to affect scheduled distributions. 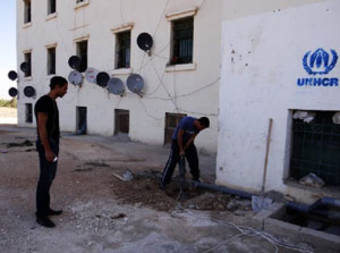 renovating shower and toilet units and replacing electrical wires in the government-appointed facility in coordination with SRCD and UNHCR.

Health: Continuing to provide free primary health care to PRS in all 24 UNRWA clinics across Jordan and referrals with full coverage to government hospitals. PRS have made 14,125 free consultations in 2013. 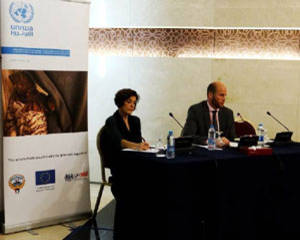 : Training delivered to 126 staff including social workers, relief and social services officers on protection focusing on international humanitarian/ refugee law, UNRWAs protection mandate, the protection environment for PRS in Jordan and how to identify and refer vulnerable people.

Outreach materials produced and being distributed including nearly 8,000 brochures on how to access UNRWA services and cards with protection hotline contact number.

Information management strengthened with improvements to the registration systems, piloting of a new database to manage protection cases and regular monitoring of service provision.

In the East intermittent and sporadic clashes and shelling throughout the period around Jobar, Qaboun, Barzeh and the adjacent area Eastern Ghouta. Hostilities were intensive in Barzeh for a day early in the period but overall hostilities in the areas continued at the same levels.  All UNRWA facilities remain closed in the areas due to the conflict except 2 schools housing IDPs in Qaboun.

In the South, sporadic clashes and shelling continued around and to a lesser extent in the camps of Yarmouk, Sbeineh, Douma and Qabr Essit showing a slight reduction on previous weeks. Ramadan continued to be relatively calm as in previous weeks except for clashes in nearby areas.

Sporadic clashes and shelling continued around Yarmouk with 5 PR reportedly killed as a result, around the same level as previous weeks. 3 were allegedly caught in crossfire while participating in a demonstration against the ongoing blockade.

Sporadic clashes and shelling continued in the southwest including around Darayya, Moadhamiyeh and Khan Eshieh, at the same level as previous weeks. The main roads to the areas remain cut off or blocked by the security forces.

Yarmouk and Sbeineh remain sealed off with access blocked by the security forces. Less than 30% of Yarmouk residents remain and less than 5% in Sbeineh with armed opposition elements present in both, although rumours that some armed elements may have left Yarmouk. PR that remain are extremely vulnerable with limited or no flight options.

Aleppo: Varying intermittent, intensive and sporadic hostilities in the period, a slight increase on previous weeks. Several mortars/ rockets detonated near UNRWAs office in the middle of the reporting period causing extensive damage to windows, doors and furniture, parts of the roof and a wall, although no staff were injured.  The office was closed for a number of days for repairs as a result. Media reported intensive airstrikes on 15 December but this did not affect UNRWAs office or PR as yet reported. Ein El Tal: Intensive clashes in the vicinity of the camp throughout the reporting period, a slight decrease on the previous weeks. Some shells impacted in the camp but with no related casualties. A reported 30 families have returned to the camp but it otherwise remains deserted and occupied by armed opposition groups with the main road to the camp blocked. Neirab camp: Intensive clashes and shelling early in the period in the vicinity of the camp followed by sporadic clashes between Palestinian armed elements and the security forces inside the camp after the security forces detained a Palestinian armed group leader. Community members are working to resolve the dispute and sporadic shelling was seen in the vicinity of the camp at the end of the period. Overall this is a decrease from the previous weeks.

Dera’a: Sporadic and intensive clashes and shelling in the vicinity of the camp at the beginning of the period, then calm for some days. This was followed by more sporadic shelling in the vicinity of the camp including a small number of shells impacting in the camp. Overall this is a decrease on previous weeks with no PR killed. Mzerieb and Jillien: Both remained relatively calm for the reporting period with all facilities operational as in previous reports.

Homs: Varying sporadic and intensive clashes and shelling continued from previous weeks in the city including explosions and airstrikes in the middle of the period. However, Homs camp remained relatively calm as in previous weeks. Hama: The camp remained relatively calm in most of the period with all facilities operational as in previous weeks except for the security forces detaining an UNRWA staff member. Reports of two IEDs and VBIED in or near the town. Latakia: fairly calm with all facilities operational as in previous weeks. However, in the middle of the reporting period a group of angry displaced PR threatened to invade UNRWAs offices over a perceived lack of assistance. In addition an incident occurred with a PR beneficiary: they were not allowed to enter a distribution centre when they refused to queue in line, and returned with a group of around 50 armed males. An altercation followed with minor injuries, the person was detained by the security forces and the building door had to be repaired. Reports were also received of mortars impacting in the countryside.

Table 1: Number of PR and Syrian IDPs in UNRWA facilities as of 16 December 2013 showing variation (in brackets) with last update Issue 65

The number of displaced PR and Syrian IDPs in UNRWA facilities in Syria overall decreased by 309 from the previous update report Issue 65. The largest decrease was in Rukn Eddin (-289), followed by Khan Dunoun (-113) and Jaramana camp (-33). However, there were also increases in Ramadan camp (+71) and Mezzah (+55). All of these are in Damascus. This is a much larger decrease than in previous bi-weekly periods but is in line with an overall decreasing trend since August as shown in the graph below. 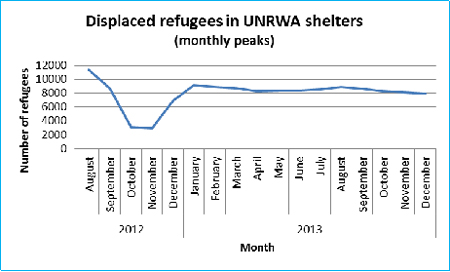