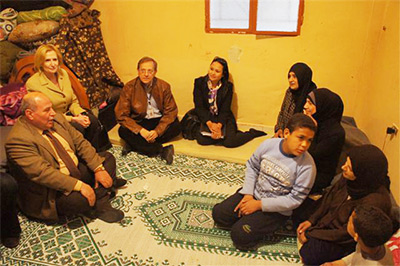 On 20 March, UNRWA Deputy Commissioner-General Margot Ellis visited Shatila camp in Beirut where she had the opportunity to meet with Palestine refugees who had fled Syria for Lebanon. During her visit to a family of 26 persons renting a small apartment in Shatila camp, the Deputy Commissioner-General heard from three women about the plight of their families and their struggle to survive. The Palestine refugee women from Syria said that they did not know the whereabouts of their husbands and came to Lebanon with their children. The women lamented the lack of work opportunities for youth in Lebanon and the dire conditions in which they live in the overcrowded camp. It is estimated that there are 2,000 Palestine refugees from Syria in Shatila out of approximately 33,000 Palestine refugees from Syria in Lebanon. The Deputy Commissioner-General urged the mothers to send their children to UNRWA schools in the camp as a matter of priority emphasizing that the children’s education must continue despite their displacement. 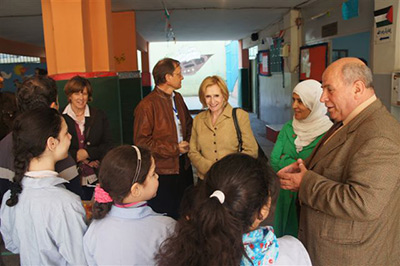 Armed conflict in Syria continues to result in a rapidly rising death toll, displacement and compounded humanitarian needs. Armed clashes continue throughout Syria, particularly in Rif Damascus Governorate, Aleppo, Dera’a and Homs. As the armed conflict has progressively escalated since the launch of UNRWA’s Syria Crisis Response 2013, the number of Palestine refugees in Syria in need of humanitarian assistance has risen to over 400,000 individuals. The number of Palestine refugees from Syria who have fled to Jordan has reached 4,794 individuals and approximately 33,000 refugees are in Lebanon.

Currently, there are some 11,500 IDPs sheltering in UNRWA-managed facilities in Syria, of which nearly 8,000 are in UNRWA buildings (e.g. schools and training centres) that are being used as make-shift emergency shelters. The IDPs are dependent on humanitarian assistance for their basic food, NFI and health needs.

IDP numbers in UNRWA facilities as of 19 March**:
** Over the past weeks, UNRWA has been striving to locate displaced Palestine refugees. These efforts have been successful in locating 2,060 Palestine refugees at 8 non-UNRWA facilities in Damascus. 1,926 Palestine refugees have been identified in Hama Camp, having come from Yarmouk and Ein el Tal. 5,281 refugees have made themselves known to UNRWA in Homs Camp, having fled from Aleppo, Damascus and Homs countryside. 2,171 refugees have made themselves known to UNRWA in Lattakia, having fled from Yarmouk and Ein el Tal. (Total: 11,438). UNRWA is providing food and NFI assistance to all displaced refugees who have approached the Agency.
Damascus / Rif Damascus:
The situation in Damascus/Rif Damascus Governorate remains tense with continued clashes and shelling. Access to Yarmouk camp remains restricted as clashes continue at the northern entrance of the camp and security forces control the entrances to the camp. Although difficult to confirm, it is estimated that approximately 60 per cent of the camp’s residents have fled Yarmouk. Sbeineh, Khan Dannoun, Husseiniyeh, Khan Eshieh, and Seyeda Zaynab have witnessed ongoing clashes and continued displacement this week. Intensive armed conflict in the vicinity of Ramadan camp has resulted in approximately 75 per cent of the camp’s residents fleeing for safer ground.

Neirab continues to see intensive clashes in the vicinity of the camp and around the neighbouring airport. UNRWA remains gravely concerned over reports of armed opposition elements restricting access to the camp. UNRWA facilities are functional in the area.

Dera’a:
The security situation in Dera’a continues to deteriorate as violence has spread to Jillien village, an area that had previously witnessed few incidents of violence compared to other areas of Dera’a. There are reports that the border between Syria and Jordan is closed on the Syrian side due to intensified hostilities in the area.

The endless road of Palestinian displacement

Abu Ali* is an elderly man, originally from Hebron in Palestine. His life has been marked by a series of displacements, fleeing from Hebron to Jordan, then from Jordan to Lebanon in the 1970s, and again from Lebanon to Syria, where he finally settled in Dera‘a.

In March 2012, overwhelmed by the violence in Dera’a, Abu Ali and his wife fled back to Jordan. The elderly couple were placed in Cyber City, a government appointed facility in Irbid.  They have six children and many grandchildren, but the family is scattered. Two of the couple’s daughters live in Amman, one daughter is still in Syria, and two sons are in Lebanon. Another daughter, Mariam, fled to Jordan last year with her husband and three children. Because Mariam’s husband is Syrian, they were permitted to live in the community. Although Mariam and her husband are only a 10-minute drive from Cyber City, the family must have permission to visit one another.

Abu Ali and his wife have been refugees as long as they can remember, but have not become accustomed to the loneliness caused by displacement. "More than once, we‘ve changed our city, our home and our furniture, and for what?" Abu Ali says.

Above all else, they are stressed by their deteriorating health. Six months ago, Abu Ali had open heart surgery.  His wife suffers from diabetes, high blood pressure, osteoporosis and rheumatism. "We are now living on medicine alone," Abu Ali says.

Abu Ali is 64. He has experienced more hardship in his life than most can imagine and lived through decades of political and personal misfortune. This week, he says he is ‘looking forward‘ to another milestone; his first year anniversary in Cyber City, a place where he feels lonelier than ever.

An UNRWA driver is missing after having been last seen transporting food parcels between Homs and Hama. UNRWA is working closely with the UN country team and local stakeholders to locate the staff member. The situation in Homs remains unpredictable with occasional shelling in the area. UNRWA facilities continue to offer services.

Hama:
There were reports of sporadic arms fire in the vicinity of the town with a shell impacting within the camp without any casualties. UNRWA facilities remain operational.
Lattakia:
The situation remains calm in the area of Lattakia, however, there were reports that a GAPAR representative was detained earlier in the week.
JORDAN

In Jordan, the number of Palestinian refugees from Syria (PRS) is 4,794, of whom 59 per cent hold Jordanian documents. Nearly 6,000 Palestine refugees from Syria have approached UNRWA, however, a total of 290 families remain in a registration backlog. Due to a funding shortage, UNRWA has been unable to hire the staff needed to register and provide much needed material assistance to the growing number of refugees approaching UNRWA area offices each week. Since 1 January 2013, the number of refugees approaching UNRWA has almost doubled. UNRWA is in urgent need of funding for food and material assistance for Palestine refugees from Syria in Jordan. As of 20 March 2013, there are 384 newly registered families (1,423 individuals) who have not received assistance. Furthermore, UNRWA has been unable to begin distribution of a second round of assistance to families, some of whom registered as far back as one year ago (note that material assistance is provided for each family member for a 4 month period.)