The humanitarian situation in Syria remains dire and continues to deteriorate, particularly in the areas of Damascus/Rif Damascus, Aleppo and Dera’a. Armed conflict has resulted in a rising death toll, displacement and compounded humanitarian needs. Palestine refugees remain a particularly vulnerable group as external flight options are limited and hostilities frequently spill over into refugee camps. Over 400,000 Palestine refugees in Syria are in need of humanitarian assistance – nearly double the number of those in need just seven months ago (225,000, September 2012). 40,000 Palestine refugees have fled to Lebanon and are being provided humanitarian assistance there, and a further 5,000 are now in Jordan, receiving health, education and relief services. 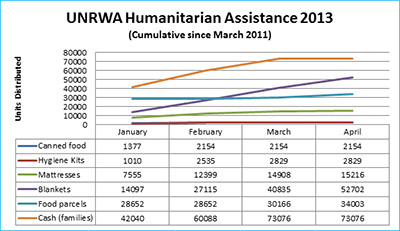 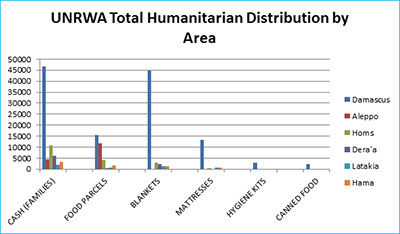 Despite security restrictions and limited access to conflict-affected areas, in the past week UNRWA has delivered 2,837 food parcels, 11,867 blankets and 308 mattresses. Since the start of the conflict in March 2011, UNRWA’s network of some 3,600 staff has delivered food parcels to 34,003 families as well as 52,702 blankets, 2,829 hygiene kits, and 15,216 mattresses.
Since the start of the conflict, UNRWA has also been able to reach 73,076 families with cash assistance. UNRWA projects team and social workers carefully monitor cash distributions. The use of the ATM banking system has also allowed UNRWA to reach Palestine refugees in areas of armed conflict where humanitarian access remains limited.

Currently, there are 7,987 IDPs receiving emergency shelter in UNRWA facilities in Damascus and Aleppo. Approximately 80% are Palestine refugees and 20% are displaced Syrians. Special needs of vulnerable groups such as 91 pregnant IDPs, 23 of which are coming to full term, and 53 new born babies are being considered in humanitarian assistance provided by UNRWA. Each UNRWA facility is designated an UNRWA social worker who is on call 24 hours/7 days a week.

IDP numbers in UNRWA facilities as of 10 April:
In addition, UNRWA has identified nearly 14,000 displaced Palestine refugees in collective centres. Displaced communities remain highly vulnerable and dependent on humanitarian assistance for their basic food, NFI and health needs.
The Education Department reports that 69 out of 118 UNRWA schools were closed today, mostly in Damascus. The Department has secured the use of a further 20 non-UNRWA schools in Damascus to ensure regular classes for as many students as possible. 23,740 students attended regular classes today.
According to the latest statistics from the Health Department, eight out of 23 health centres were open this week. A further seven were partially open, and eight were completely closed due to nearby hostilities and access difficulties.

Damascus and the surrounding area:

The situation in Damascus / Rif Damascus Governorate remains tense and unpredictable with clashes continuing in areas such as Jobar, Qaboun, and Barzeh. The majority of residents from Yarmouk and areas such as Husseiniyeh, Khan Dannoun, Seyeda Zaynab, Khan Esheih, and Sbeineh remains displaced, with as many as 95% of refugees being compelled to leave certain camps. UNRWA estimates that there are approximately 187,000 displaced Palestine refugees within the Damascus area. UNRWA has responded to the humanitarian needs of this particularly vulnerable group of Palestine refugees who, in many cases, are dependent on humanitarian assistance to survive. Staff are increasingly exposed to risk, and there are currently 13 staff who are missing or detained. An UNRWA staff member who was previously reported missing on 1 April has been returned to her residence in Khan Eshieh.

UNRWA continues to deliver humanitarian assistance in Aleppo despite on-going airstrikes, shelling and clashes. Armed elements are reportedly continuing to restrict humanitarian access to Neirab camp, with the health centre reporting it is about to run out of all medicine supplies. Attempts are being made to deliver urgent medical supplies early next week. Ein el Tal camp is also effectively cut off due to clashes between the camp and Aleppo city.

There have been reports of intermittent clashes in the town centre, however the camp remains relatively calm and UNRWA facilities are operational.

The situation remains calm and UNRWA continues to deliver services.

Cash distribution
UNRWA distributed a new round of cash for housing and food assistance thanks to the generous donations from the EU and Germany, respectively. The cash for housing assistance was distributed per family size with 160,000 LBP given to a family of 1-3 members and for a family of 4 and above 220,000 LBP was provided. For the food assistance each family member received 30,000 LBP.
The distribution took place during the first week of April with 11,182 families, who recorded and showed up at the distribution, received housing assistance and 39,721 Palestine Refugees from Syria (PRS) received food assistance. This is out of the 12,229 families and 42,657 total persons who recorded their details with UNRWA. Those who received the distributions represents 91.44 percent of recorded families and 93.12 percent of individuals with a grand total of 3,319,690,000 LBP distributed.
Palestine Refugee students from Syria
The number of PRS students at UNRWA schools reached 3275 in total (659 in regular classes; 2616 in special classes).  The mid-year exams for students in special classes in 14 schools have were conducted from Monday 11 to Thursday 14 March.  Also, distribution of books covering learning material for the coming six weeks to the 14 schools in all areas was recently completed.

Return to Syria
This week there has been a growing trend of voluntary return to Syria among Palestine refugees residing in Cyber City. To date, 23 refugees have requested permission to return to Syria. Most of them are families – some with children as young as 5 months old – reflecting a similar trend amongst some Syrian refugees. In an attempt to understand the reasons for return, UNRWA spoke to several returnees who expressed their frustration at being kept at temporary accommodation in Cyber City with no long term solution in sight.
Refoulement
Despite interventions from UNRWA, a family of three was returned to Syria, having entered overnight and being transported back the next day. 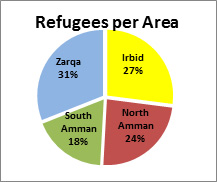 Palestinian Refugees from Syria in Jordan
As of 11 April 2013, UNRWA has recorded 1,219 Palestinian families of concern to the Agency, or 5,127 individuals. Currently, 193 Palestinians reside in Cyber City, the government appointed facility in Irbid governorate. Following the trend seen among Syrian refugees in the past weeks, 23 Palestinians housed in Cyber City returned voluntarily to Syria in the past weeks.
Registrations in Jordan per Month since September 2012
From 1 Jan to 10 Apr 2013, UNRWA registration of Palestinians displaced by the violence in Syria has increased by 75.4%. Unlike UNHCR, which is able to track numbers of Syrians entering Jordan on a daily basis, UNRWA has no such capacity. Tracking of refugees’ dates of entry happens retrospectively at the time they register with UNRWA.

The current profile of Palestine Refugees from Syria in Jordan includes:
Inside Cyber City, core services such as food, education and healthcare are provided by UN agencies and NGOs. 42 school-aged Palestinian children are attending UNICEF schools. UNRWA provides all medicine for chronic illnesses, covers hospitalization costs and offers daily support from social workers to Palestinians. The Agency supplements core services with a weekly mobile dental clinic available to all residents, Palestinian and Syrian alike.

Outside of Cyber City, the majority of Palestine refugee families from Syria live in abject poverty and are unable to meet their basic nutritional needs, and thus qualify for UNRWA’s poverty support. In addition to material assistance, in communities UNRWA provides essential services through existing programs in primary health care, hospitalization, education, relief and emergency assistance, and a range of protection services.