09 July 2013
Weekly Syria Crisis Report, 8 July 2013
REGIONAL OVERVIEW
Conflict is increasingly encroaching on UNRWA camps with shelling and clashes continuing to take place near to and within a number of camps. A reported 6 Palestine Refugees (PR) were killed in Syria this week as a result and 5 seriously injured, highlighting their unique vulnerability, with refugee camps often theatres of war. At least 44,000 PR homes have been damaged by conflict and over 50% of all registered PR are now displaced, either within Syria or to neighbouring countries.
Approximately 235,000 refugees are displaced in Syria with over 200,000 in Damascus, around 6600 in Aleppo, 4300 in Lattakia, 3000 in Hama, 6400 in Homs and 13,100 in Dera’a. 71,037 PR from Syria (PRS) have approached UNRWA for assistance in Lebanon (63,100) and Jordan (7937 (+86 from last week)). UNRWA is tracking reports of PRS in Egypt, Turkey, Gaza and UNHCR reports up to 1000 fled to Malaysia, Thailand and Indonesia.
1.       SYRIA
Displacement
UNRWA is sheltering over 8160 Syrians (+155 from last week) in 19 Agency facilities. Of this 6854 (84%, +50 from last week) are PR (see table 1). This follows a fairly constant trend since April ranging from 8005 to a high of 8400 in May. The number of IDPs in UNRWA facilities has not varied greatly since the beginning of the year with the lowest figure 7571 recorded in early January. A further 4219 PR (-3 from last week) are being sheltered in ten non-UNRWA facilities in Aleppo, Lattakia and Damascus. In addition, nearly 18,000 PR have been identified or approached UNRWA in different camps having fled from other areas in Syria:
The Agency continues to provide regular food, NFI and health assistance to registered and known PR if they have approached the Agency whether they are in UNRWA or non-UNRWA facilities.
Situation summary
2.       Humanitarian Response
Syria
Education
Health
Relief
Continuing work with Iraqi PR in Syria including regular counselling and visits in cooperation with UNHCR and their local partners.
UNRWA food and cash distributions in Syria cumulative as of 27 June 2013 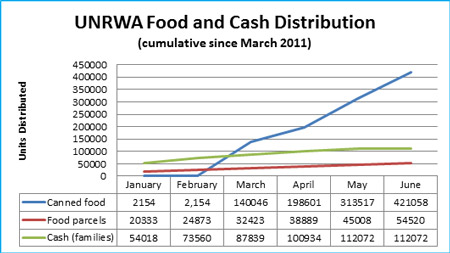 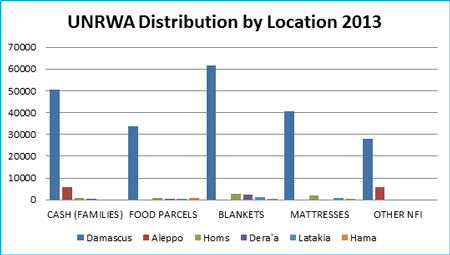 LEBANON
63,100 Palestine refugees from Syria (PRS) have approached UNRWA for assistance in Lebanon, equivalent to around 18,300 families. They are located in Saida (31%), Beqaa (21%), the Beirut area (17%), Tyre (17%) and the north (14%).
Cash distributions: Planning for the next round of cash distributions which may be in September utilizing alternative modes of distribution if required and feasible.
Shelter: 11 shelter rehabilitations assessed and approved to provide housing to 88 families. Rehabilitation works being carried out for 4 shelters in Saida, 6 in Tyre and one in Central Lebanon. 7 other requests are under assessment. Recruited more sanitation workers and increased support for water networks in coordination with Popular Committees across the camps.
Education: Summer learning classes for PRS who have been out of school during the school year, scheduled to run until September. Emergency education programme for PRS ongoing including recruitment of 14 psychosocial counselors.
Health: Continue to deliver medical consultations and medications through UNRWAs 28 health centres. Health awareness sessions conducted during the PRS cash distribution in June and staff attended a health training workshop.
Protection: Monitoring and reporting officer stationed at border crossing to offer advice to PRS when they cross and report on concerns and flow of PRS. Continue to advocate with Lebanese Government for equal treatment of all refugees at the border.
JORDAN
25 more PRS families were recorded this week bringing the total to 1947 PRS families (7937 individuals) recorded by UNRWA in Jordan. 52% are female; 49% under the age of 18; and 30% of the families (576) are headed by women. 198 Palestinians reside in Cyber City, the government appointed facility in Irbid but the vast majority reside in communities with host families or in rental premises - mainly in Irbid, Zarqa and Amman - and are assessed to live in abject poverty (98% qualify for Social Safety Net status). 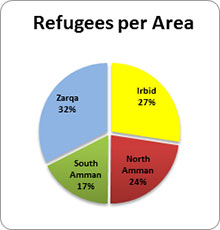 Education: Students are out of school for the summer. JFO participated in the training of school counselors to support the provision of psychosocial support to PRS students.
Health: From January to early June 6293 PRS individuals accessed healthcare in UNRWA clinics and government hospitals. UNRWA is extending its partnership agreement with the Jordan Health Aid Society (JHAS) for the operation of a Primary Health Care Center in Cyber City until December 2013.
Relief: From 1 January to mid-June, 1317 PRS families (72% of families registered with UNRWA) received emergency assistance. Amounts, timing of distributions and delivery mechanisms are currently being reviewed to ensure that vulnerable PRS families can meet their essential needs.
Protection: UNRWA continues to work closely with the Government of Jordan to address a range of protection concerns for PRSs.
3.       Security summary
Syria
Damascus / Rif Damascus:
Local media reported an IED detonating in the area of Baramkeh Thursday morning targeting the Deputy Minister of Labour and seriously injuring him. Further reports a VBIED was found and disarmed the same day in Mezzah area. There was one IED the previous Thursday so the number stayed constant this week.
Clashes and shelling continued in many areas of the city, including Douma, Yarmouk, Sbeineh, Husseiniyeh, Sit Zeynab and Khan Eshieh and particularly intensive in and around Jobar, Qaboun and Barzeh where all facilities remain closed. Intensive clashes and shelling all weekend and continuing in and around Set Zeynab camp with reports of the military pushing their way into some parts of the camp and controlling a large part of the camp. Sbeineh Camp remains cut off by security forces with opposition groups still in the area. Less than 5% of residents remain and no UNRWA staff. Reports over the weekend of looting of houses in Husseiniyeh camp.
Some shells impacted the camps causing the deaths of at least 6 PR in Yarmouk and serious injury to 3 PR children. An old PR lady was reportedly shot and injured allegedly by a sniper in Husseiniyeh later in the week following similar reports of alleged sniper killings of 3 PR the previous week. Limited facilities are available in the camps due to the nature of the conflict and accessibility of UNRWA staff.
Sporadic and intermittent clashes in and around Yarmouk refugee camp throughout the week intensifying later in the week and weekend. A number of shells impacted in the camp killing at least 6 PR, 4 over the weekend alone, including the son of an UNRWA staff member. This is a rise from 3 the previous week. Sporadic clashes around the northern entrance which is closed periodically by security forces who heavily restrict access to the camp. Less than 30% of camp residents remain (approx. 20,000 PR), all health centres unable to operate since January 2013 and all facilities remain closed. Many refugees there are extremely vulnerable and have limited or no flight options outside the camp. Armed opposition groups remain in the camp. The violence stayed at similar levels to the previous week.
Aleppo: Intensive hostilities with clashes and shelling started early week and subsided into sporadic/ intermittent shelling. Intensive clashes and shelling in Bustan Al Qaser area over the weekend but the office was operational throughout the week. Ein el Tal remains empty of refugees except a small number that visit to retrieve belongings and armed opposition groups continue to control the area. Neirab Camp and surrounding areas remained relatively calm as in the previous week. The camp remains accessible and all facilities are operational, providing shelter to 121 Syrian IDPs in three schools.
Dera’a: Intermittent shelling night and day continued from the previous week south of the town and near the camp with a few shells impacting in the camp without injuries. Sporadic clashes in the week and intensive clashes over the weekend in Al Mahata and Al Kashef area where UNRWAs warehouse is located. The office remained closed as in the previous week with essential operations continuing from alternative locations in and around the camp and another location being refurbished.  Mzerieb relatively calm for most of the week with sporadic shelling later in the week. Some shells impacted the fringe of the camp and village leaving a child injured but most facilities were operational. Jillien relatively calm most of the week except for shelling heard in the distance. Themain road remains blocked but refugees can access the village via a side road. The border to Jordan remains technically open but is still inaccessible due to insecurity along the route, as in previous weeks.
Homs: Sporadic shelling early week decreased mid-week then intensified significantly at the end of the week and over the weekend in the city centre, Khaldyeh and the Old City. UNDSS continues to suspend UN operations in the city including missions to and from it. The camp (to the south of the city) remained relatively calm all week as in the previous week but most facilities were closed later in the week due to the military operations and UNDSS advice. The situation continued somewhat with the previous week and was an improvement on 2 weeks ago with no airstrikes reported. Hama and Lattakia: Both towns and camps continued relatively calm throughout the week and weekend with all facilities in both camps operational, showing no change from the previous week. All roads in Homs and to Hama are blocked.
Lebanon & Jordan
NSTR
Table 1: Number of PR and Syrian IDPs in UNRWA facilities as of 7 July:

Please note: information in this report comes from a range of sources including open-source material. It may therefore be incomplete or contain inaccuracies. It is focused on UNRWAs areas of operation so may not reflect the overall situation in Syria and/ or areas where UNRWA is not active. Some information may be sensitive so you are requested to treat it with discretion and confidentiality.