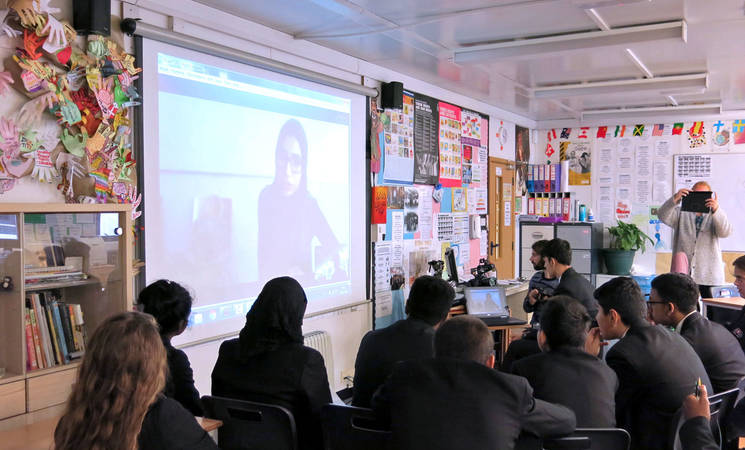 This month saw the 25th anniversary of the UN Convention of the Rights of the Child, article 12 of which states that children have the right to a voice in matters that concern them. The UNRWA project #myvoicemyschool enabled conflict-affected Palestine refugee youth in Syria, Lebanon and Jordan and their peers in the UK to discuss the meaning of education in their lives and futures. In the words of British school children taking part, “We found that people in Syria still have hope that things are going to get better, so we want to focus on the positive side of life too. We think this would help people in Syria be heard and make them feel supported.” The project has received international coverage, including on the BBC website and BBC radio (17:12 – 22:40). To read more about the project and the participating students, please click here. The project reflects UNRWA commitment to providing innovative, high quality and student-led education in emergency situations.

More than half a million Palestine refugees continue to be affected by the conflict in Syria. UNRWA aims to preserve the resilience of Palestine refugees by continuing to provide critical services and humanitarian assistance. For a more detailed overview of the latest news and UNRWA support for Palestine refugees from Syria, please visit the Syria Crisis page.

Displacement. In Syria, approximately 560,000 Palestine refugees are registered with UNRWA. It is estimated that over 50 per cent of Palestine refugees are displaced within Syria, with a further 14 per cent displaced to neighbouring countries. Sixteen UNRWA installations across Syria house 6,164 internally displaced persons (IDPs), of whom 9 per cent are Syrians. A further 6,925 Palestinians are hosted in other installations managed by UNRWA.

Funding. The total pledged amount against the 2014 Response Plan stands at US$ 202.5 million, including US$ 33.6 million pledged in 2013 for implementation in 2014. This amount is equivalent to 49 per cent of the total budget of the 2014 Syria regional crisis response required for January-December 2014 (US$ 417 million). For a complete overview of funding, please visit the Agency's 2014 Syria regional crisis response page.

Inter-agency. The Syria Regional Crisis Response Plan and the 3RP will be launched on 18 December in Berlin, hosted by the German Ministry of Foreign Affairs.

Media. The media focused on the widening scope of the Syrian refugee crisis, UN Special Envoy de Mistura’s plan for localized conflict‘freezes’and the situation of Palestine refugees in Lebanon. The magnitude of the refugee crisis has moved beyond the ability of Syria’s neighbours to shoulder the burden alone. Refugee hardship is compounded by the lack of humanitarian access and constrained financial support for humanitarian organizations, including UNRWA.

Yarmouk. UNRWA was able to access Yarmouk for seven days between 1 and 15 November with the facilitation of relevant authorities. During this period, UNRWA staff distributed 900 jerry cans containing drinking water, 1,400 food parcels and 800 hygiene kits to 1,400 families. On the days when UNRWA had access to Yarmouk, medical staff were able to provide health services to 625 patients at the temporary health point in Yarmouk. UNRWA remains deeply concerned about the humanitarian situation in Yarmouk. The Agency is liaising with authorities concerned and urging for the restoration of continuous UNRWA support to reach over 4,000 civilian families inside Yarmouk.

Education. The #myvoicemyschool project, mentioned in the highlights, enabled conversation between conflict-affected Palestine refugee youth in Syria, Lebanon and Jordan and their peers in the UK. The students discussed education and their futures. Conversations via Skype were vibrant and exciting, as students discovered shared values and priorities. Ensuring that children and youth are not ignored and have the space to define their own lives is an incredibly powerful way to promote protection. Ayat, a 15-year-old girl in a collective shelter in Damascus, confidently said she plans to rebuild her country more beautiful than it ever was. “In silence I am powerless, but with my voice, I can do many things,” she says.

Health. The conflict in Syria has left many Palestine refugees in need of physical rehabilitation and artificial limbs. In collaboration with local hospitals, UNRWA has been able to assist 25 individuals (eight women and 17 men) in the Damascus area with artificial limbs and rehabilitation. A third of those patients fitted with artificial limbs are under the age of 20. Rehabilitation and prosthetics are critical to improving their quality of life, and ability to find employment and partake in socially-meaningful activities. UNRWA hopes to assist at least 90 other Palestine refugees who are currently registered and awaiting referral.

Relief and Social Services. UNRWA runs an ‘Adolescents Project’ funded by UNICEF in the Jaramana community centre and IDP shelter. The project consists of various activities, including ‘My Dream Home’, which helps children and youth with disabilities express their emotions through drawing and art. Other psychosocial activities include playing chess on large boards and handicraft activities such as making hay baskets and accessories from beads. A handicraft exhibition is currently being prepared by a women’s organization and community centre in Safed IDP shelter in Rukn Eddin.

Engineering. The rehabilitation of an UNRWA school and community centre in Qabr Essit camp is a “symbol of the steadfast resilience of Palestinians”, according to Director of UNRWA Affairs in Syria Michael Kingsley-Nyinah. Mr. Kingsley-Nyinah visited the UNRWA installations in Qabr Essit camp on 5 November to meet with staff, refugees and government officials. He noted that UNRWA staff have made substantial progress in making essential assistance available to Palestine refugees in Syria, despite the huge demand for emergency support and severe funding shortfalls. Mr. Kingsley-Nyinah added that the rehabilitation of Qabr Essit Camp “demonstrates UNRWA’s unwavering commitment to seize every available opportunity to restore its services in Syria to the benefit of Palestine refugees, wherever circumstances permit. UNRWA will continue to appeal to the authorities to facilitate the return of Palestine refugees and the restoration of UNRWA services to other locations where calm has been restored, including Sbeineh and Husseiniyeh in Rif Damascus.”

Vocational Training. The Damascus Training Center (DTC) has introduced e-learning courses for its students in response to the protracted crisis in Syria. The DTC offers 66 courses to students via an e-portal. Students who access courses online receive online support from teachers and a variety of educational materials, which will soon include educational videos. So far, 200 students have enrolled in courses via the e-portal. The provision of alternative education resources is significant in the context of Syria, where access to education is often hampered by the security situation. The provision of online courses provides students the opportunity to study from their homes, continuing to gain qualifications and additional skills, and improve their employability.

Protection, legal status and advice. The restrictions imposed by the Lebanese government in early May 2014 continue to result in the denial of entry to the majority of Palestine refugees fleeing Syria for safety in Lebanon, including many seeking unification with close family members already in Lebanon. Even Palestinians transiting through Lebanon to a third country or entering for embassy appointments in Beirut face obstacles and long delays at the border.

The Lebanese authorities announced on 25 September that Palestinians with expired visas could renew their visas free of charge for one time only. UNRWA is closely monitoring the implementation of the policy, including the time required for Palestine refugees from Syria to obtain the three-month visa and the implications on their ability to complete civil registration procedures, including birth registrations. Furthermore, UNRWA is actively engaging the authorities to clarify future implications on the status of Palestine refugees from Syria after visa extensions expire.

Humanitarian assistance. Since February 2014, cash assistance for Palestine refugees from Syria has been distributed on a monthly basis. In October, 41,000 beneficiaries were credited (totaling US$ 1.22 million for food and US$ 1.12 million for housing). Since an UNRWA-WFP needs assessment of July 2014, vulnerability-based assistance has covered 97% of Palestine refugees from Syria, who remain eligible  for a monthly US$ 30 per person for food and US$ 100 per family for housing, pending availability of funds. All Palestine refugees from Syria continue to have access to the core UNRWA programmes. Following an assessment by the UNRWA protection team, unaccompanied and separated minors (fewer than 150 as of August 2014) have received assistance in cash, rather than via an ATM card.

Environmental health. UNRWA continued to strengthen camp infrastructure to cope with the increasing demand on camp utilities. This included rehabilitation of the sewerage network in Burj Barajneh camp in addition to rehabilitation of water supply systems, as in Ein El Hilweh, Rashidieh and Beddawi camps. UNRWA faced technical difficulties with some of its compactor trucks, and as a result, additional interventions were carried out to enable disposal of refuse from the camps of Nahr el-Bared and Beddawi. Environmental health promotion activities were carried out in all camps, including distribution of hygiene kits.

Health. Thanks to generous contributions from donors, UNRWA is covering the cost of primary health care services for Palestine refugees from Syria, including medical consultations and free medication through the 27 UNRWA health centres located throughout the country. The health programme is also covering the costs of secondary, and contributing towards, tertiary hospitalization for emergency and life-threatening conditions. Additionally, UNRWA provides financial support for Emergency Room Services at Palestine Red Crescent Society hospitals and partially covers these services at UNRWA-contracted hospitals. Since April 2013, UNRWA has also supported Palestine refugee from Syria patients suffering from critical health conditions, providing financial support to patients with costly medical procedures.

Education. Class formation for the 2014-15 school year has been completed. While in previous years, admission to UNRWA schools in official and unofficial UNRWA camps had been open to Syrian children, for this school year, critical funding shortfalls have made the Agency limit new enrolments to Palestine refugee from Syria children only. Approximately 800 Syrian children who are not currently enrolled in UNRWA schools require access to education; UNRWA is working with its partners, including the government, other UN Agencies and donors to see how it can assist them. UNRWA has received a contribution of 2,982 school bags from UNICEF, of which approximately 2,500 had been distributed as of mid-November.

Emergency relief. US$ 2.5 million cash assistance for essential needs (food and NFIs) has been distributed to vulnerable Palestine refugees from Syria. An additional US$ 80,000 has been distributed as one-off emergency cash-grants to assist approximately 230 families that had experienced a major shock.