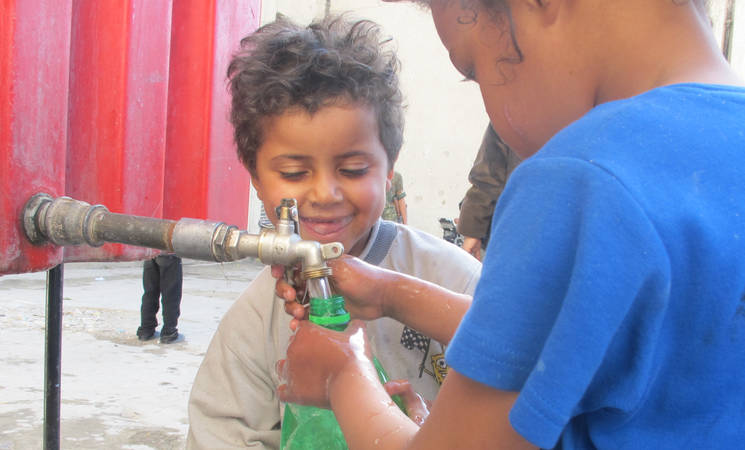 More than half a million Palestine refugees are directly affected by the conflict in Syria. The UNRWA response aims to preserve refugees' resilience through the continuation of UNRWA services and humanitarian assistance. For a more detailed overview, see the Agency's 2015 Syria regional crisis response here. This monthly update covers UNRWA efforts in March 2015.

While this monthly update covers the month of March, we first touch briefly on the current situation in Yarmouk: Since 1 April, Yarmouk has witnessed a dramatic escalation of violence that continues to put the lives of 18,000 Palestine and Syrian civilians, including 3,500 children, at great risk. The civilians of Yarmouk have experienced extreme suffering, siege and exposure to armed conflict for more than two years. Yet this is the worst crisis they have faced, with conflict engulfing their homes and exposing them to the most severe violations of international human rights and humanitarian law. UNRWA urgently calls on the international community to support its emergency relief effort, as outlined in this call for funds. With the generosity of donors, and in coordination with other humanitarian actors, UNRWA will provide emergency supplies, shelter and essential services for civilians caught in the violence in Yarmouk and other areas of Syria, for an initial period 90 days. To view daily Yarmouk situation reports, please click here.

UNRWA has significantly expanded its response in areas neighbouring Yarmouk, such as Yalda, Babila and Beit Saham, where there was previously no UNRWA presence. UNRWA medical personnel established a mobile health point, treating hundreds of people per day, and aid is distributed to Palestinian and Syrian families displaced from Yarmouk, and also to host communities. On 11 April, UNRWA Commissioner-General Pierre Krähenbühl undertook an urgent three-day mission to Damascus, in coordination with the Office of the UN Secretary-General. During his visit, Mr. Krähenbühl met with civilians who fled Yarmouk and are currently staying in a government school in Tadamon. The mission also served to consult a range of partners to explore further humanitarian action.

This update covers UNRWA operations in March. As in Yarmouk, Palestine refugees across Syria remained in a profound state of vulnerability and deprivation. UNRWA has maintained services for the majority of the population in other parts of Syria, with permanent operations in Damascus, Aleppo, Homs, Hama, Latakia and Dera’a. Several locations in Damascus, Aleppo and Dera’a remain inaccessible, however, with residents malnourished and suffering extreme deprivation. Displaced Palestine refugees are forced to survive in UNRWA collective shelters or overcrowded and extremely expensive rental accommodation. When they find refuge outside of Syria, Palestinians suffer marginalization and acute vulnerability, including in Lebanon, amongst an already vulnerable Palestinian community.

Of the 17 United Nations staff killed in Syria as a result of the conflict, 14 are UNRWA staff. Thirty UNRWA staff are currently detained or missing and many have been injured during the course of the conflict.

Funding. At the end of March, the total pledged amount against the 2015 appeal stood at US$ 74.6 million, including US$ 9.6 million pledged in 2014 for implementation in 2015. This is equivalent to 18 per cent funding of the total appeal, which covers the minimum humanitarian needs of Palestine refugees affected by the crisis and totals US$ 415 million.

Inter-agency. The 3RP (covering UNRWA operations in Lebanon and Jordan) can be found on www.3rpsyriacrisis.org and the SRP (covering the whole of Syria) here. Regional coordination focused on reporting on the RRP6 (the 2014 predecessor of 3RP) and on preparations for the third pledging conference in Kuwait. UNRWA will publish its report on the 2014 Syria Emergency Appeal in April.

Media. Some highlights in the media were as follows:

Approximately 560,000 Palestine refugees are registered in Syria. Of these, around 280,000 have been displaced inside Syria and over 80,000 to other countries.

Yarmouk. On 5 March 2015, the Agency was able to resume food distribution for the first time since 6 December 2014, from a new entry point established to the east of Yarmouk. Throughout March, UNRWA was able to access Yarmouk on 14 days, distributing a total of 4,463 family food parcels and conducting 1,191 health consultations at its temporary health point. The Commissioner-General visited Yarmouk on 10 March to meet with some of the 18,000 Palestine refugees trapped in the area. In response to widespread deprivation and malnutrition among residents of Yarmouk, UNRWA calls for safe and continuous access to the area and other areas that remain hard to reach. Go to the UNRWA Yarmouk crisis page for the latest updates.

Education. At present, UNRWA runs eight teaching points to improve the education of students living in UNRWA collective centres. teaching points support children from grade 1-9 in subjects including Arabic, English, French and Math. In addition, the Agency developed support classes to better prepare grade 9 students for their national exams; there have been 57 of these support classes throughout Syria to date.

Emergency relief. The first round of cash distribution for 2015 started on 18 January and finished on 26 March. Between 18 January and 26 March, the Agency provided 466,473 Palestine refugees (116,618 families) with two months of cash assistance.

Shelter. UNRWA is housing 10,570 Palestine refugees and internally-displaced Syrians (2,657 families) in 30 temporary collective centres in Damascus and surrounding areas. In Aleppo, Latakia and Homs, UNRWA supports 1,649 Palestine refugees and internally-displaced Syrians (381 families). Refugees in shelters are provided with food assistance and NFIs, as well as regular health and social services.

Wash. UNRWA distributed 3,463 hygiene kits to refugees in collective centres. Each hygiene kit contains soap, shampoo, disinfectant and other sanitary items to last a family of four for one month. In addition, the Agency distributed 31,656 adult and baby diaper packs to all displaced refugee families, in addition to 397 baby kits. UNRWA conducts regular maintenance, garbage collection, plumbing and sanitation works in all accessible facilities, camps and gatherings. The Agency was unable to distribute hygiene kits to the residents of Yarmouk in March.

Around 45,000 Palestine refugees from Syria have been recorded by UNRWA in Lebanon, all of whom continue to have access to UNRWA programmes in Lebanon.

The results of the recent Post-Distribution Monitoring Survey undertaken by UNRWA indicate that all Palestine refugees from Syria in Lebanon are becoming more vulnerable, with little access to livelihood opportunities or public services. Notably, the survey found that UNRWA cash assistance represents the main source of income for over 95 per cent of Palestine refugees from Syria and the sole income for over 75 per cent.

Despite the increasing need, UNRWA is facing severe shortfalls in funding for cash assistance in all fields of operation. Without further donations, the Agency will be forced to reduce its cash assistance programme in the coming months. As of April 2015, UNRWA will be implementing regional standards for food assistance in Lebanon. Accordingly, cash assistance for food in Lebanon will be reduced to US$ 27 per person instead of US$ 30 per person.

In Jordan, 15,432 Palestine refugees from Syria have approached UNRWA for assistance. This is an increase of 213 since February. There were 221 new records in March, while 25 were unrecorded for various reasons. Growth in recordings of Palestine refugees from Syria in Jordan continues to be higher than anticipated for 2015, and more than triple the monthly average in the last quarter of 2014.

Emergency relief. As of March, 83 per cent of Palestine refugees from Syria are categorized as most vulnerable, including 43 per cent extremely vulnerable. Food and NFI cash assistance was delivered to 11,842 people in late March, covering two and a half months of assistance.  No funding was available for a further 220 households (approximately 900 beneficiaries) living outside the targeted governorates. Shelter assistance was discontinued in 2014 due to lack of funding. Winterization assistance was ’topped-up’ with JOD 64 for 487 vulnerable households in South Amman. Emergency cash grants were delivered to 23 households (91 beneficiaries) in March.

Education. In the current academic year, 1,696 children from Syria are enrolled in 141 UNRWA schools. In 2015, UNICEF is supporting non-Palestinian Syrian students who enrolled in UNRWA schools earlier. However, 800 Syrian children living in Palestine camps could not be admitted to UNRWA schools due to funding shortfalls and lack of space. In March, 226 children were referred for informal education, through UNICEF and its partners. UNRWA and UNICEF will continue to work together to ensure the remaining 574 children have access to education.