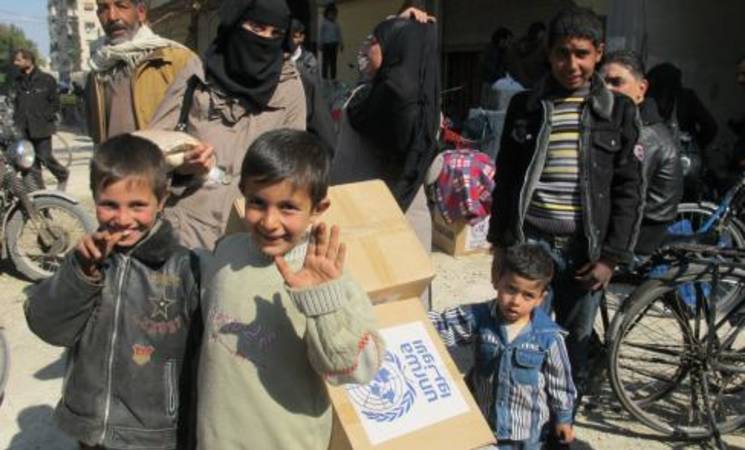 More than half a million Palestine refugees are directly affected by the conflict in Syria. The UNRWA response aims to preserve refugees' resilience through the continuation of UNRWA services and humanitarian assistance. For a more detailed overview, see the Agency's 2015 Syria regional crisis response here. This monthly update covers UNRWA efforts in April 2015.

Since 1 April, Yarmouk has witnessed a dramatic escalation of violence that puts the lives of 18,000 Palestine and Syrian civilians, including 3,500 children, at great risk. On days when UNRWA conducts missions to the areas surrounding Yarmouk, daily situation reports are published here.

UNRWA has successfully broadened the humanitarian response for thousands of people displaced from Yarmouk to neighbouring Tadhamon, Yalda, Babila and Beit Sahem. With the facilitation of Syrian authorities, UNRWA has delivered food parcels, clean water and fresh bread; field kitchens have prepared hot meals, and medical and dental teams have treated thousands of people. April 28 was a high point of these efforts. On that day, with the facilitation of Syrian authorities, United Nations humanitarian agencies combined their strengths with the Syrian Arab Red Crescent to lead a 22-truck convoy to Yalda, Babila and Beit Sahem. This significant expansion of the humanitarian response was a realization of the Framework which emerged from the three-day mission to Damascus of the Deputy Special Envoy and the UNRWA Commissioner-General.

UNRWA urgently calls on the international community to support its emergency relief effort, as outlined in this call for funds. With the generosity of donors, and in coordination with other humanitarian actors, UNRWA will provide emergency supplies, shelter and essential services for civilians caught in the violence in Yarmouk and other areas of Syria, for an initial period 90 days.

In Lebanon, the Palestiniadi games brought together Palestinian and Lebanese students to play games and sports. In preparation, with the support of the EU, UNRWA distributed sport suits to Palestine refugee students from Lebanon and Syria. The new Director of UNRWA Affairs in Lebanon, Matthias Schmale, opened the event with the words: “Sport is an effective tool in building bridges between different communities and groups. As such, the Palestiniadi has all the components necessary to break down barriers and bring about social change.”

Of the 17 United Nations staff killed in Syria as a result of the conflict, 14 are UNRWA staff. Thirty UNRWA staff are currently detained or missing and many have been injured during the course of the conflict.

Funding. US$ 98.1 million, including US$ 9.6 million pledged in 2014 for implementation in 2015. This is equivalent to 23.6 per cent funding of the total appeal, which covers the minimum humanitarian needs of Palestine refugees affected by the crisis and totals US$ 415 million.

Inter-agency. The 3RP (covering UNRWA operations in Lebanon and Jordan) can be found on www.3rpsyriacrisis.org and the SRP (covering the whole of Syria) here. Regional coordination focused on reporting on the RRP6 (the 2014 predecessor of 3RP) and on preparations for the third pledging conference in Kuwait. UNRWA will publish its report on the 2014 Syria Emergency Appeal this week.

The escalation of violence in Yarmouk led headlines internationally, bringing a spotlight on the condition of Palestine refugees. UNRWA humanitarian efforts featured in a large number of news outlets. UNRWA video clips from Yalda aired on CNN and Al-Jazeera.
PRS in Lebanon featured in stories of instability in Ein El Hilweh, highlighting the limited options Palestine refugees face in Lebanon. The Guardian featured an interview with a Palestine refugee from Syria in Ein El Hilweh, who reflected on deaths in the Mediterranean, which dominated media in the second half of April.
More positive was regional press about the Palestiniadi held in Lebanon.

Approximately 560,000 Palestine refugees are registered with UNRWA in Syria. Of these, around 280,000 have been displaced inside Syria and over 80,000 to other countries.

Yarmouk. Yarmouk has witnessed a dramatic escalation of violence that continues to put the lives of 18,000 Palestine refugees and Syrians at risk of death and injury. In April, UNRWA had access to neighbouring areas to the east and southeast of Yarmouk, including Tadhamon, Babila, Beit Sahem and Yalda on 20 days, providing: 5,008 food parcels, 13,200 bundles of bread and 50,000 litres of potable water, as well as a range of NFIs. The mission also distributed Plumpy Doz nutritional supplements to families with children under five years old. UNRWA established a central kitchen, which serves up to 600 meals per day, in a collective shelter at Yalda. The Agency also supports a communal kitchen established in Babila, which serves up to 300 meals per day. A mobile dental unit was deployed on 28 April, the first such service in the area for over two years. Thirty-six patients were treated on the first day, including surgical procedures. UNRWA continued to provide health services and served over 2,200 patients since operations started in the area. Go to the UNRWA Yarmouk crisis page for the latest updates.

Education. Since the start of this school year, UNRWA has provided 30,250 students with school-based psychosocial support and recreational activities. A total of 20 recreational spaces are being established throughout Syria, to provide children a safe space to play and socialize. The Parent Teacher Association held trainings in Homs and Latakia for 53 participants, including parents, school administration, teachers and student members of the School Parliament, with the objective to strengthen links and encourage engagement with the Human Rights Conflict Resolution and Tolerance programme.

Health. UNRWA provides primary health care to up to 480,000 refugees in Syria through 14 health centres and 11 health points. In areas surrounding Yarmouk, the Agency operates a temporary health point and a mobile dental clinic, which last month provided over 2,200 civilians with primary healthcare, 36 civilians with dental services, and vaccinations for 57 children.  UNRWA is also distributing nutritional supplements to families with children under five years old.

Shelter. UNRWA operates 37 collective centres in Damascus, Aleppo, Hama and Latakia, providing shelter to 12,219 refugees and Syrian IDPs, including 145 newborns, 197 persons with disabilities and one unaccompanied child. The Agency provides daily food, health and social services to shelters, in addition to regular provision of NFIs, garbage collection, cleaning and water/sanitation maintenance and upgrades.

Approximately 45,000 PRS are recorded with UNRWA in Lebanon. Due to a funding shortfall, UNRWA will be forced to reduce cash assistance in the coming months, despite Palestine refugees from Syria (PRS) in Lebanon becoming increasingly vulnerable, with UNRWA cash assistance the main source of income for 75 per cent of PRS in Lebanon.

Protection. In April, an internal government circular was (re)issued, valid till the beginning of May, allowing PRS to renew their residency permits for up to three months upon payment of a US$ 200 fee. A similar circular had been issued in February; however neither has been officially published and implementation has been inconsistent. Some PRS reported that they were issued with a departure order by the authorities, despite paying the fee. UNRWA continues to closely monitor the situation at the border through a dedicated border monitor.

Education. As of April, 5,521 PRS students have been regularly attending classes, representing a slight decrease from the beginning of the school year. As psychosocial support, Parents’ Awareness Sessions were held in the first quarter of the year and will continue in 22 schools until June. In April, 300 PRS, PRL and Lebanese students participated in the Palestiniadi games at the Siblin Training Centre – recreational sport activities intended to foster friendship and social inclusion. UNRWA distributed sport suits to PRS and PRL students in 5th and 6th grade in March, accompanied by sports and recreational activities for boys and girls in preparation for the Palestiniadi event. More than 100 PRS teachers completed an eight-week refresher course in pedagogy and active learning, with a graduation ceremony taking place at the end of April. The same teachers are now undergoing School Based Teacher Development training, which will run until December 2015.

WASH. UNRWA continues to work at upgrading water, sanitation and solid waste infrastructure. In the Burj Shemali and Mieh Mieh camps, maintenance on the existing sewerage system is underway, and upgrades are being made to the current water supply network. Maintenance of sewerage lines has been completed at both Nahr el-Bared and Beddawi camps, marking significant progress for the north of Lebanon, where a large proportion of the PRS population resides. UNRWA has also employed 36 sanitation labourers, provided them with essential sanitation equipment and distributed more than 3,000 refuse bins, funded by the EU and UNICEF, to improve waste management in all camps. Four hygiene promoters (three in the Central Lebanon Area and one at Wavel camp) are working with residents to raise awareness about personal hygiene, proper sanitation practices and water conservation.

Health. In partnership with UNICEF and in coordination with the Ministry of Public Health, UNRWA launched a polio vaccination campaign in March and April reaching 11,609 PRS.

As of 30 April, 15,561 Palestine refugees and their family have approached UNRWA for assistance. This is an increase of 129 since March. A total of 145 new PRS  recorded with UNRWA in Jordan in March, while 56 files were deactivated for various reasons. Growth in PRS recordings in Jordan continues to be higher than anticipated for 2015, with an average increase of 190 individuals per month.

Emergency relief. As of April, 82 per cent of PRS are categorized as most vulnerable, including 42 per cent extremely vulnerable and 40 per cent vulnerable. To date, 261 appeals have been reviewed. Food and NFI cash assistance distributed in late March ensured the needs of 11,842 most vulnerable PRS in three governorates (Amman, Irbid and Zarqa) were fully covered in April. However, a further 900 beneficiaries living outside the targeted governorates have been without food and NFI assistance since mid-February, due to funding shortfalls. It is expected that these households will receive their outstanding entitlement  in May, thanks to recent donor contributions. Cash-for-rent for close to 12,000 vulnerable PRS has not been delivered in 2015 due to ongoing funding shortfalls, as was the case in 2014. Emergency cash grants were delivered to nine households (34 beneficiaries) in April, protecting the resilience of households facing major crises, such as eviction. One-off cash assistance is complemented by follow-up from UNRWA social workers to provide non-financial support.

Protection. Since January 2015, UNRWA has been aware of the forced return of 41 PRS to Syria (including seven individuals in April). UNRWA is concerned for the welfare of these individuals, who face persecution and physical threat in Syria. Overall, 45 protection cases involving PRS were identified in April, including seven child protection cases, two cases of gender-based violence, eight cases of newborns without birth certificates, two cases of non-renewal of documents, 23 cases of risk of forced return, two cases of actual forced return and one case of detention. PRS are highly marginalized in Jordan, and many PRS children are bullied at school. Since March, UNRWA has been organizing support groups that aim to integrate PRS children and help create a peaceful dialogue between students when a conflict occurs. In April, 24 Palestine refugee children, including 14 PRS students, participated in the support groups. One child remarked, “we are very happy because we are here together with other children who once bullied us”. Another exclaimed, “Now, I have friends!”

Education. In the 2014/5 academic year, 1,696 children from Syria (PRS and Syrian children living in the Palestine camps) have been enrolled in 141 UNRWA schools. UNRWA has a number of Learning Resource Centres in its schools in Jordan, which include learning aids such as laptops, data projectors and audiovisual facilities, as well as new furniture, to provide a better learning environment.