Note: Every Monday, Wednesday, and Friday, the United Nations Relief and Works Agency (UNRWA) will disseminate information about the situation of Palestine refugees in Syria.

In a statement issued on Sunday night UNRWA expressed “extreme worry and grave concern” about the unfolding situation there. UNRWA Commissioner-General Filippo Grandi has appealed to the Syrian authorities, and all parties to the conflict, to safeguard the security of Palestine refugees wherever they reside in Syria, and the Agency emphasized the urgent nature of his appeal following Sunday‘s events. 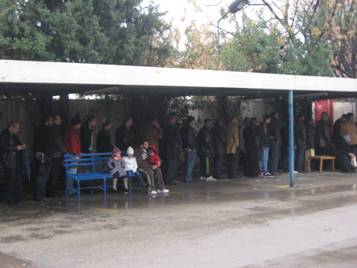 Yarmouk refugee camp is reportedly calm after days of intense fighting that led to the displacement of tens of thousands of Palestine refugees. Unconfirmed information by a small number of refugees that visited the camp today indicated the disappearance of armed opposition elements. This information is noteworthy in light of reports that point to efforts by Palestinian factions to forge an agreement to remove armed groups from both sides of the conflict out of the camp. Occasional shelling reportedly continues in the areas surrounding Yarmouk and Sbeineh refugee camps, with Sbeineh camp accessible today.
Northwest of Damascus remained calm today, with clashes and shelling reported around Darayya neighborhood and the adjacent military airport, with sounds clearly audible from UNRWA’s Field Office in the area.
Facilities in the Yarmouk, Douma and Jaramana refugee camps remain closed today due to access restrictions, although schools in the camps continue to shelter IDPs. UNRWA facilities in Set Zaynab, Husseiniyah and Khan Dunoun were operated by staff living within these camps. Khan Eshieh refugee camp in the Southwest remained calm and accessible on Friday.
Jaramanah, to the east of Yarmouk saw an escalation of activity, with reports of intensive clashes and explosions on Friday, although camps in the area remain relatively calm, with Husseiniyah refugee camp sheltering a number of refugees from Yarmouk. There have been reports that clashes broke out in the Qaboun neighbourhood, where UNRWA maintains some installations.
As clashes and shelling continue around various parts of Aleppo, refugee camps in the city are relatively calm. UNRWA Area Office continued its operations without electricity, distributing cash to refugees from Ein el Tal. Some clashes continue around Ein el Tal and Neirab camps and access to both remains a concern although not impossible. The camps themselves however remained relatively calm and facilities in both camps were again operational today.
The city of Dera‘a remained relatively calm on Friday, with the exception of two shells in the immediate vicinity of Dera’a refugee camp that killed a child. On a more positive note, Palestine refugees managed to enter and fix some of the damage to the Dera’a health centre caused by a recent shelling. Facilities in the city remained closed as a precautionary measure, while facilities in the villages resumed operations. The town itself was deserted on Friday, with unconfirmed reports of snipers preventing people from moving about.
Homs and Latakia cities are calm, and refugee camps accessible, although in Homs, sporadic gunfire sound has been reported overnight, around the camp.

UNRWA response to the recent escalation (as of 21 December 2012):

As part of the United Nations’ response to the urgent humanitarian needs in Syria and for those displaced to neighbouring countries, UNRWA launched its Syria Crisis Response Plan covering the period from January through June 2013. UNRWA intends to provide urgent humanitarian assistance to up to 360,000 people affected by conflict in Syria, up to 5,500 Palestine refugees from Syria in Jordan, and up to 20,000 Palestine refugees in Lebanon. In order to meet these needs, UNRWA requires a total of US$91.2m, of which US$75m is for programme interventions inside Syria, US$13.3m for Lebanon, and US$2.9m for Jordan.
Dramatic escalation of hostilities in Yarmouk Camp in Damascus has caused tens of thousands to flee, seeking shelter in UNRWA installations and elsewhere, adding to the 100,000 Palestine refugees already estimated to be displaced within Syria.
With the winter season upon us, our immediate concern is to ensure that refugees are provided with emergency assistance to make it through the cold weather.
Our priority funding needs within the UNRWA Syria Crisis Response Plan total US$ 9.2 million as follows:
Winterization needs :
--Ends-- 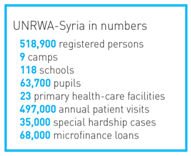 As the Syria conflict and its impact on civilians continue to escalate, UNRWA continues to exert all efforts to respond to the humanitarian needs of Palestine refugees. The Agency is monitoring the situation as it evolves, and its staff will continue to assess the situation and render any needed assistance.
UNRWA is a United Nations agency established by the General Assembly in 1949 and is mandated to provide assistance and protection to a population of some 5 million registered Palestine refugees. Its mission is to help Palestine refugees in Jordan, Lebanon, Syria, West Bank and the Gaza Strip to achieve their full potential in human development, pending a just solution to their plight. UNRWA’s services encompass education, health care, relief and social services, camp infrastructure and improvement, microfinance and emergency assistance.
Financial support to UNRWA has not kept pace with an increased demand for services caused by growing numbers of registered refugees, expanding need, and deepening poverty. As a result, the Agency‘s General Fund, supporting UNRWA’s core activities and 97 per cent reliant on voluntary contributions, has begun each year with a large projected deficit.
For more information, please contact:
Sami Mshasha
UNRWA Arabic Spokesperson
Mobile: +972 (0)54 216 8295
Office: +972 (0)2 589 0724
[email protected]
Show your support to Palestine refugees in Gaza
Donate