Home » Newsroom » Features » ‘We don’t know when it will end’: the anguish of Yarmouk
Back to Newsroom

‘We don’t know when it will end’: the anguish of Yarmouk 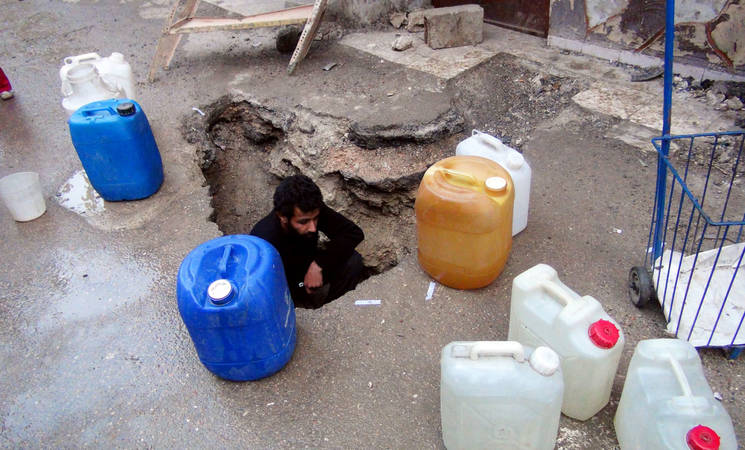 Yarmouk is an extreme illustration of the deep, protracted suffering that many Palestine refugees in Syria endure. Yarmouk was once the bustling, prosperous heart of the Palestinian community in Syria; home to some 160,000 Palestine refugees and about a million Syrians. Today, about 18,000 are trapped in Yarmouk with limited access to food and water. There is no electricity, and most civilians cannot meet essential needs such as health care, household items, adequate shelter and heating. The desperate humanitarian situation has worsened as sniper fire, mortar impacts and heightened insecurity have prevented UNWRA from distributing life-saving aid.

It has been two months since UNRWA last completed a successful aid distribution.  Since December 6 2014, UNRWA has delivered just 36 food parcels.  To meet the minimum food needs of this extremely vulnerable population, UNWRA needs to deliver 400 food parcels each day.

On January 15, Palestine refugees told UNRWA they were eating one meal a day. Mahed described feeling helpless. “My kids get up in the morning asking for a glass of milk or a piece of bread. I can only give them a radish or vegetables, and sometimes even this is not available.”

There has been no steady supply of water since September 2014. Residents rely on untreated groundwater. They buy drinking water when they can, or boil water from wells when pumps have the fuel they need to operate. One parent said his children have diarrhea. The Palestine Red Crescent Society recently reported 104 cases of jaundice, which may indicate the spread of hepatitis A.

Adding to the hardship, the brutal winter storm Huda exacerbated the suffering of residents, who live in houses with broken windows and doors. Desperate for heat, people have been burning clothes and furniture, unleashing toxic fumes that make them ill. Raeda said that during the storm “there was no way of warming the houses and the water also froze. It became difficult for school kids to write, because their hands were too cold.”

The daily struggle to survive and months of trauma have eroded hope for the future. Ahmed commented: “We are not coping, we are adapting. This negatively affects our health, our lives, our kids and our psychological state. We feel we are going through endless tunnels, and we don’t know when it will end.”

To stop the suffering of Palestine refugees, UNRWA calls for the immediate cessation of armed hostilities in and around Yarmouk, and for all concerned parties to act in ways that promote the protection of civilians and give the utmost priority to their humanitarian needs.

You can help support the Palestine refugees from Syria by contributing to life-saving needs here.