Home » Newsroom » Features » “We left for the children”
Back to Newsroom

“We left for the children” 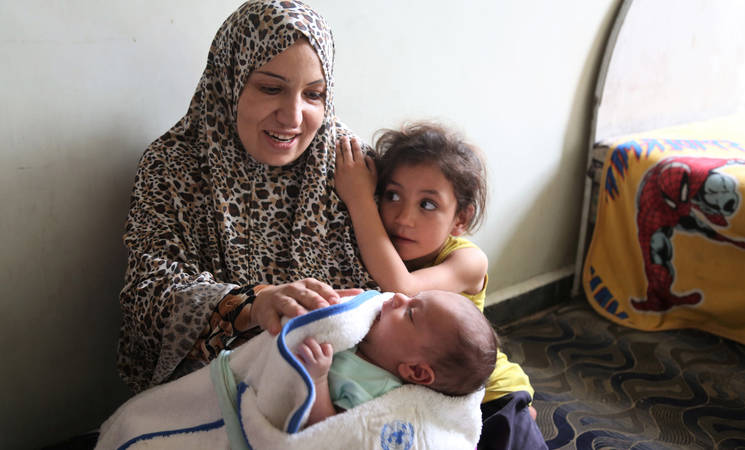 When Rana Mahmoud Halabi (33) talks about her comfortable life before the war, her eyes light up. Her husband used to fish for tilapia and carp in the Euphrates river. She would help him clean the catch of the day before he brought it to market. “Raqqa was a lovely city,” she sighs. The war put an end to all that, forcing her children out of school and her family into debt. UNRWA cash assistance has allowed them to get back on their feet.

The Halabi family had wanted to leave Raqqa for a while, as they were concerned about the future of their five children. Their daughter Mara wasn’t allowed to go to school. “We had enrolled her, but then the armed groups came and closed the schools,” she recalls.  Her sons, too, had to forego an education. All schools were closed, she says, and so her children stayed home. There seemed no other option but to leave their home. “We left for the children, their education is the most important thing for us – we had to leave.”

When the bombing campaign intensified at the start of 2017, the family felt there was no time to waste. Rana was pregnant at the time. “We were terrified to a point that we left everything behind,” she says, describing a long, difficult and costly journey to reach safety. “We used smugglers and paid lots of money for safety,” she says. “We risked our lives.”

They have joined a throng of internally displaced people across Syria. More than 250,000 of a total of 438,000 Palestine refugees in the country are internally displaced. The Halabi family found a new home in Neirab camp, in Aleppo.  Money is tight, her husband hasn’t been able to find a job in the city, where there is no river to fish in. They often borrow money just to make rent, which costs 25,000 Syrian pounds (roughly US$ 50) every month. UNRWA cash assistance, which gives each family member $64 every two months, has become a lifeline. It allows the family to pay off their debt, pay for water trucking, and buy clothes for the children in winter. “We rely a lot on the UNRWA cash assistance,” she says earnestly.

The Spanish Agency for International Development (AECID) and Spain’s Autonomous Communities of Galicia, La Rioja, Madrid and Murcia, in the framework of the Collaboration Agreement between AECID and the Autonomous Communities for Humanitarian Action-related Joint Programming (20 May 2015), are one of the generous contributors to the UNRWA cash assistance programme, providing US$ 400,000 to support displaced Palestine refugees in Syria in 2017.

As for her children, they have been enrolled in the UNRWA school. Mazen (10) happily hunches over his homework.  His sister Mara (7) and 12-year-old Ghazal, too, have returned to the classroom. “We had to make sure we give them a proper education,” Rana says.