“We paint for the people of Gaza” 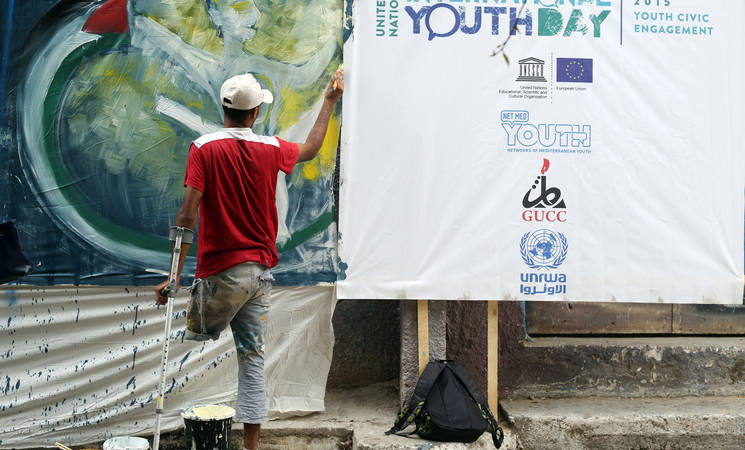 Artists from Gaza attempt to create the longest mural in Palestine

Approximately 50 young talented artists from Gaza have painted a 100-metre-long mural under the theme of ‘youth civic engagement’ on the northern wall of the UNRWA compound in Gaza City. The mural, which is painted on a canvas hung on the wall, attempts to break a new record as the longest mural in Palestine.

“We paint for the people of Gaza,” commented artist Mohammad Likruns on his motivation to participate in the project.

“In Gaza, we still have not woken up from the nightmare of the past three conflicts. In Gaza, we need life. With this mural, we are painting for hope and life,” added journalist Nael Khader, who decided to volunteer for the project.

The mural painting project was organized by the United Nations Educational, Scientific and Cultural Organization (UNESCO) under the UN Theme Group on Young People, of which UNRWA is also an active member. The mural was implemented in partnership with the General Union for Cultural Centres in Gaza. With the ‘youth civic engagement’ theme, UN institutions seek to promote and raise awareness of greater political, social and economic participation for youth so that they will be empowered, enabling them to fully contribute to society, development and peace.

The mural hung for approximately one week on the UNRWA wall. The painting may be used for future exhibitions in Gaza and the West Bank, and some sections may be donated to UNRWA schools in the occupied Palestinian territory.