“Yarmouk is my past and my future” 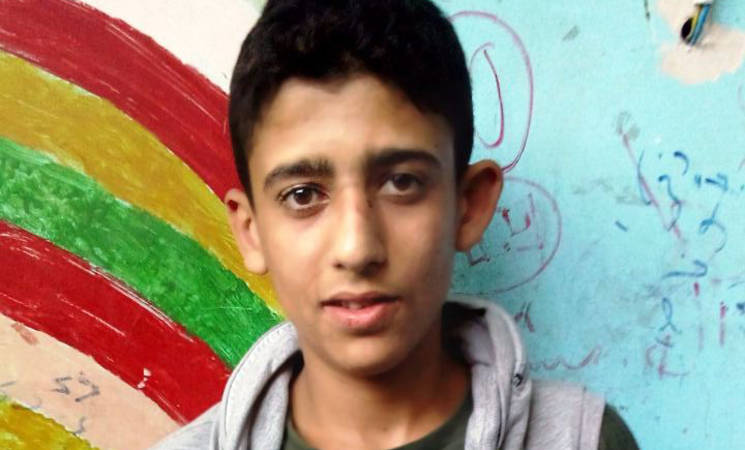 In the weeks leading up to Syria’s ninth-grade national exams, 16-year-old Maher suffered from nightmares. Unusually for a student, he was less concerned about the exams and more worried about reaching the examination centre. “Every night I had a nightmare,” he recalled. “We were at the checkpoint to get out of Yarmouk and a mortar shell landed. We could not get to the exam.”

Living in Yarmouk, which has become a byword for civilian suffering in the brutal conflict in Syria, Maher and many other youth in the area have been undeterred from continuing their education. Up to 18,000 civilians remain in the area, which has been under siege for almost two years. Residents suffer from severe shortages of food, water, medication and electricity. Many rely solely on humanitarian assistance from UNRWA, which arrives sporadically depending on access to the area.

“My father used to wait for several hours to get an UNRWA food parcel, while my mother would go out foraging in former gardens for herbs to flavour our meals,” said Maher. “I would also collect wood from the roads so my mother could cook for us.” In 2014, UNRWA was only given access to distribute aid to Yarmouk on 131 out of 365 days. This averaged only 400 kcal per resident per day, falling well short of the UN recommended intake of 2,100 kcal per day.

In early April, the situation in Yarmouk changed for the worse when armed violence escalated again, placing the lives of civilians at even greater risk. Maher fears for his family and their future. “The situation in the camp is terrifying for us,” he said. “We cannot take the risk of leaving our house more than once or twice per week to collect food and supplies to survive.” He adds, “It is dangerous each time we go out, and we all worry about each other during their absence.”

Despite these harrowing circumstances, education remains a top priority for the Palestine refugee community in Yarmouk. Teachers and community volunteers established their own school to make up for missed lessons. Without electricity at night, students had to fit their studies into daylight hours. “I want to express my gratitude to the teachers who followed my studies during the year and gave me private lessons,” Maher said.

In May 2015, an agreement was reached to let Maher and 129 other Palestine refugee students exit the besieged neighbourhood of Yarmouk in Damascus. With the support of UNRWA, they had two weeks to complete their ninth-grade national exams. While boarding at the UNRWA Palestine Institute School, the students received three hot meals per day, attended catch-up classes, and had the chance to meet 134 other Palestine refugee students who returned to Syria from Lebanon to complete the Syrian curriculum exams. “It was the first time I had left my family for so long,” Maher noted. “I missed them, and I missed my home.”

Upon completing his exams, Maher was unwavering about returning to Yarmouk. He missed his family, and he believes that the neighbourhood will be rebuilt. With such determination to see a bright future, young people like Maher will play a critical role in the future of Syria. “I hope to get back to the old Yarmouk, where we were secure as one Palestine people and one family,” he said. “Yarmouk represents my past and my future.”