Home » Newsroom » Features » Aisha Ibrahim: An Agent of Change in Her Community
Back to Newsroom

Aisha Ibrahim: An Agent of Change in Her Community 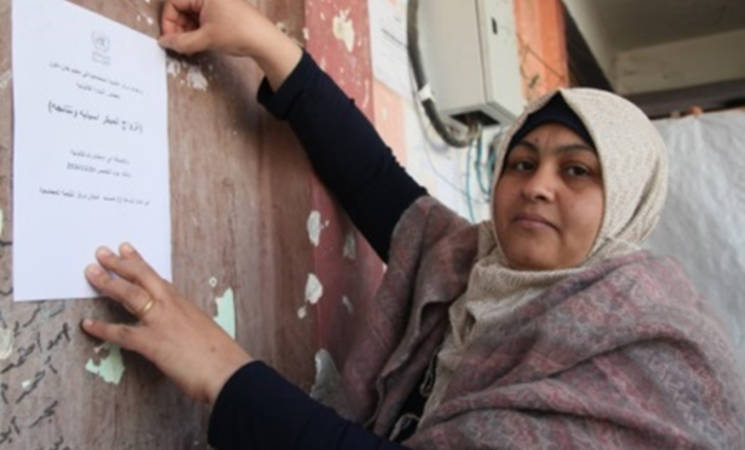 It is early morning when 32-year-old Aisha Ibrahim posts an announcement on the wall of the Al-Khalssa School collective shelter in Khan Dunoun camp, south of Damascus. Aisha, a volunteer for the Women’s Committee, is inviting women and girls from the area to attend a seminar on child marriage being held later in the week.

Aisha and her family arrived in Khan Dunoun in 2012, seeking shelter after being displaced several times by the conflict. UNRWA provided them with a tent, one of many that were pitched in the yard of the school that had been converted into a collective shelter. “Living in a tent was very hard with five children, three daughters and two sons. It was agony,” explains Aisha.

Feeling depressed, Aisha rarely left the tent until one day, when the supervisor of the shelter came by to invite her to join one of the training courses offered by the Women’s Committee. The course and the subsequent workshops Aisha attended changed her life. They helped her break out of her isolation and provided her with leadership tools, communication skills and awareness about gender-based violence (GBV). “I was interested in the trainings because I wanted to make community members aware of how to help stop GBV,” Aisha explains.

Four years on, Aisha is now the head of the Women’s Committee. Aisha’s work is vital in Syria. Since the outbreak of the crisis, mass internal displacement affecting hundreds of thousands of people have created conditions in which women and children are increasingly at risk of GBV.

Walking through the small alleys that cross Khan Dunoun camp, Aisha reaches out to women and girls and encourages them to attend the seminar, which takes place every week. “During the session, we will emphasize the importance for girls to continue their education,” Aisha explains while greeting the community members.

Aisha is among the seven volunteers in Khan Dunoun trained through the Agency’s ‘Safe from the Start’ project. Thanks to this project, funded by the United States government, women living in UNRWA shelters throughout Syria are provided with seminars, sessions and workshops on the prevention of and response to GBV. The volunteers play a crucial role in raising awareness and supporting survivors of gender-based violence within Palestine refugee communities in Syria.

Looking back at her involvement with the Women’s Committee, Aisha has flourished and feels empowered. “It is very rewarding to be able to do my part and to know that I have become an agent of change in my community,” she says with satisfaction.

The project, ‘Building Safety: Mainstreaming GBV Intervention in Emergency Preparedness, Prevention and Response,’ has been developed and funded by the US Department of State’s Bureau of Population, Refugees, and Migration, within the context of the US government’s ‘Safe from the Start’ initiative.  This initiative is an effort to change the way that organizations and UN agencies address GBV in humanitarian contexts. The initiative funds projects like this one to address violence against women and girls and systematically prioritize GBV in emergencies.

According to the Inter-Agency Standing Committee (IASC) GBV Guidelines, GBV is an umbrella term for any harmful act that is perpetrated against a person’s will and that is based on socially ascribed differences between males and females. GBV can occur in both private and public spheres, meaning that it can be perpetrated in the home by family members (e.g. domestic violence), as well as by those outside of the family, such as neighbours, co-workers, strangers, community leaders, etc. Whereas the main causes of GBV are rooted in gender inequality and discrimination, risks of GBV are exacerbated during emergencies as a result of the erosion of protective structures and community cohesion, thus increasing both vulnerabilities and risks for women and girls. It is within this context that GBV must be understood as a life-threatening protection issue that needs to be taken into account and prioritized from the onset of a crisis.

Ask the Director: Interview with the Director of UNRWA Affairs in Gaza, Matthias Schmale
Germany contributes EUR 25 Million in support of Palestine refugees in Gaza and Lebanon
A Palestine Refugee Family in the Grips of Lebanon’s Economic Meltdown
A Closer Look at the Work of UNRWA School Counsellors in Lebanon
syria: unrwa - progress highlights of emergency appeal january-june 2021
Socio-economic Survey on Palestine Refugees from Syria living in Lebanon
syria regional crisis emergency appeal 2021