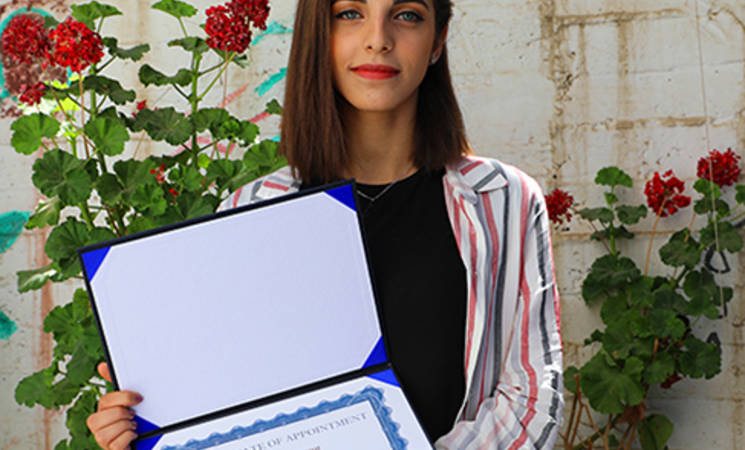 “I’ve been lucky twice! First, when I won a scholarship from Bethlehem University to study in South Korea for a whole semester and, second, when I was named a Permanent Ambassador to Palestine by Handong University. This is not only a title but a job with real duties, just like any other ambassador to any country.”

Rayan Abu Srour is a 20-year Palestine refugee from Aida refugee camp in Bethlehem in the West Bank and an English major at Bethlehem University. She has been dreaming of working with an international organization like UNRWA since she was in school and, through this appointment, her dream was fulfilled earlier than expected.

The story began when Rayan –was selected to participate in a student exchange programme to study in Handong Global University in South Korea.  After competing with many other international students, Rayan was named Handong’s permanent ambassador to Palestine, becoming the first Palestinian ever to hold this title.

Ambassador with a dual mission

Rayan says that she does not consider herself an ambassador of her university only, but that she has also been an ambassador of her community representing Palestine refugees in South Korea. “There is a general sympathy with the Palestinian cause but with some misconceptions…they still think that Palestinians live in tents,” Rayan says.  “I tried to convey the reality of Palestine refugees and the challenges they face.”

Part of her official mission is to encourage Palestinian students to travel to South Korea and enroll in Handong University. Rayan will also conduct introductory meetings about Handong in the West Bank, in addition to receiving any South Korean delegations who will be visiting the occupied Palestinian territory from Handong.

Rayan’s father, Ibrahim Abu Srour, who serves as the UNRWA Camp Services Officer in Aida refugee camp – is her most ardent supporter: “I believe in Rayan’s abilities. Although I was worried about her traveling alone and being away from home for a long time, I was confident about her ability to represent her country in the best way possible. So, I provided her with everything she needed to enroll in this scholarship and, as a father, I am extremely happy to see my daughter returning to Aida as an ambassador, especially since all the camp residents are proudly talking about her experience.”

Regarding the role of UNRWA schools, Rayan says: “I spent nine years in UNRWA schools.  It was one of the best educational experiences I have ever had. The school refined my personality and made me into the person I am today. It also gave me the confidence and the strength to speak publicly in front of people thanks to the extracurricular services and activities which UNRWA provided, in addition to its regular educational services.”

Further, Rayan joined the Sexual and Reproductive Health and Rights (SRHR) programme in her last three years at the Aida Girls School. The SRHS programme targets Palestine refugee children and aims at spreading awareness on domestic violence and gender roles, among other things. As a participant of the programme, Rayan received intensive training and joined many activities, including both summer and winter camps. “Our mission was to spread awareness among refugee students about these topics,” she adds, “There is no doubt that this experience played a role in shaping my current personality. This opportunity was remarkable and fruitful as it enhanced my public speaking and leadership skills. I also traveled to some countries and I reflected that in my experience at Handong University.”

Rayan plans to earn a Master’s degree in International Relations after completing her Bachelor’s of Arts and to work in for an international organization to serve her fellow refugees who are facing major challenges on daily basis.