Home » Newsroom » Features » Back on the First Day: After Four Years without access a teacher returns to her classroom in Sbeineh camp
Back to Newsroom

Back on the First Day: After Four Years without access a teacher returns to her classroom in Sbeineh camp 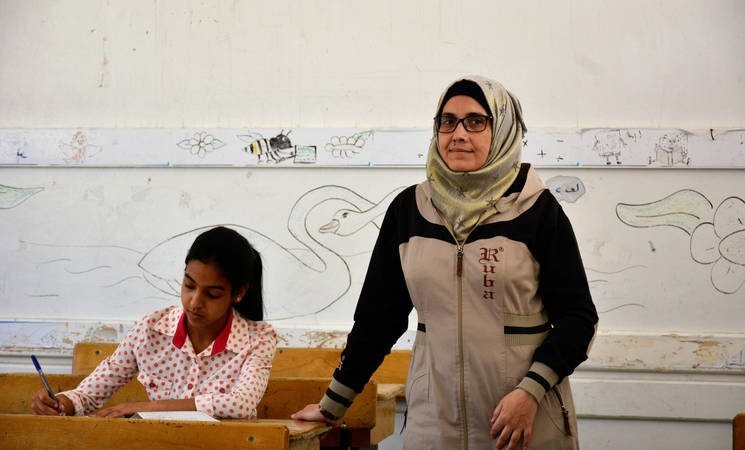 Nuha Abu Nasser, a 40-year-old from Sbeineh camp, smiles as she walks through the hallway of a recently re-opened UNRWA school. The walls are freshly painted and decorated with brightly coloured numbers in Arabic and English.  Nuha taught here for six years before the school was closed in 2013 when militants took over Sbeineh camp. Nuha, along with her family, friends and students, was forced to leave.

Four years later, UNRWA returned to Sbeineh. What Nuha found was very different to what she had left behind. The school had been ravaged by the conflict, playground walls were riddled with bullets and many of the windows were shattered. The computer lab was ransacked; even the electricity cables were stolen. But the building still stood and the wooden school desks, scrawled with graffiti from past students, were still in place.

UNRWA quickly rehabilitated the school and with the help of a generator and water trucks, opened its doors to eager young minds in October, 2017. “I was back on the first day,” says Nuha. School started with a handful of teachers and only a few dozen students. Now, six months later, that number has swelled to almost 1,500 students, as Palestine refugees return to their homes and boys and girls return to the two schools UNRWA has re-opened in the neighborhood.

Nuha wasn’t the only one to return; some of her former students are back too. Not only have they grown older and wiser, but they have been deeply affected by the war, she says. “A spirit of violence has been instilled in them,” she notes. “They react to any and all transgressions against them.”  Luckily the school offers psychosocial support to address this issue. “I really feel the difference in the classroom after a counsellor has visited,” she adds.

The crisis in Syria has brought new challenges to Nuha as a teacher. Students have had to drop out of school due to displacement. Almost 60 percent of Palestine refugees in Syria have left their home at least once. For many, this has meant missing classes, sometimes for an extended period of time.  Children are assigned to a class based on their age, and not their ability, in Syria. As a result, there is some variation in the level of aptitude among Nuha’s students. Every day, more and more children return to school, filling her classroom to capacity. She has devised a buddy system to allow stronger students to assist peers struggling with class material.

Nuha is one of 1,800 teachers employed by UNRWA in Syria. A donation from the Government of Japan allows UNRWA to cover the salaries of some 400 teaching staff. UNRWA educates more than 47,000 children in Syria and provides much needed services such as water trucking and waste removal to families returning to their homes. The Agency has also conducted awareness raising sessions on explosive remnants of war (ERW) for 100 residents of Sbeineh camp.

Despite the challenges she has faced, Nuha remains passionate about her profession. “I have wanted to be a teacher since I was a young girl. I’m building a new generation.”