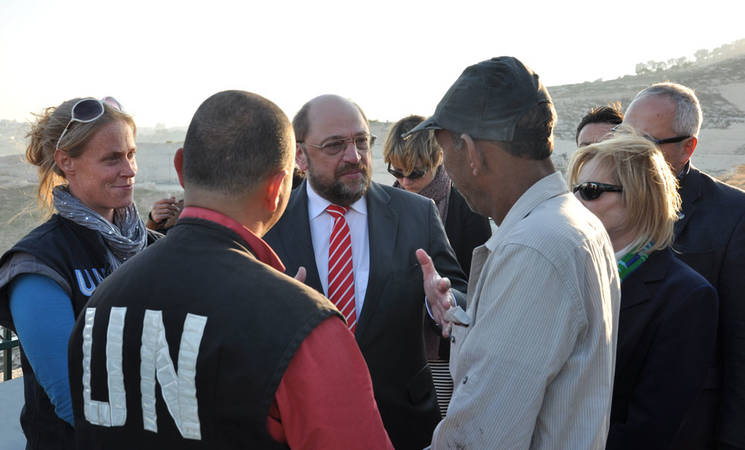 “Refugees were displaced once in 1967. The Bedouin refugee is being displaced once a year,” according to Abu Khamees, a representative of the Bedouin community of Khan al Ahmar. This cluster of communities, on the eastern periphery of Jerusalem, is in Area C, the 60 per cent of the West Bank that is under full Israeli control. Speaking to Martin Schulz, President of the European Parliament, Abu Khamees explained that around 2,300 people are under threat of displacement here.

Mr. Schulz was visiting the West Bank accompanied by Margot Ellis, Deputy Commissioner-General of the UN Relief and Works Agency (UNRWA). Along with Prime Minister of Palestine Dr. Rami Hamdallah, they had intended to visit the significant Khan al Ahmar School, which is the only school in the area and serves five Bedouin communities, including 21 registered refugee families and 128 students from the Abu Dahouk tribe. After their visit was hindered by Israeli authorities, the delegation met at an alternative location.

Mr. Schulz was briefed by an UNRWA staff member and by Ramesh Rajasingham, head of the UN Office for the Coordination of Humanitarian Affairs (OCHA), on current Israeli measures to displace the Bedouin of ‘Arab al Jahalin. The Israeli government aims to annex the community’s land into the ‘bubble’ of E1, connecting it to the Ma’ale Adummim settlement.

Mr. Schulz said, “The European Parliament’s position is clear, as it rejects settlements.” He called on Israel to stop its settlement expansion and confirmed that he would raise the issue of Bedouin displacement in meetings with his Israeli counterparts.