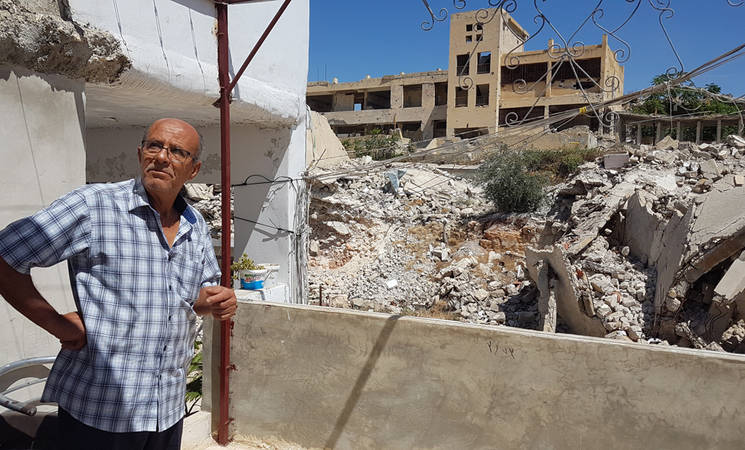 “Not only did I come back and repair our home in Ein el Tal, but I also recovered from a stroke! I was told that I might never walk again, but now, I’ve cultivated a garden, even in the face of danger from explosive remnants of war. I’m proud to have survived these challenges and now I grow fruits and vegetables to support my family and a few friends who have also returned to the camp. I want to give from what I have and I believe in the future.” He continues, “I want to wake up and hear children’s voices on their way to school again. Once we unite our efforts, we will manage to make this happen.”

Originally from Acre in historic Palestine, Hajj Ma’rouf, 64 has spent most of his life in Ein el Tal refugee camp, Aleppo, where he kept his family together – strong and united – in a new house he built for them, notwithstanding his dream of returning to Palestine one day.

For decades he worked odd jobs and was always ready to adapt to the needs of his family and community. The camp community has always known Hajj Ma’rouf as a generous, committed and helpful person. He managed to build a house big enough for himself, his children and their families. “Our life was simple, but good,” he said. “I earned enough to cover everything we needed, I even managed to buy a TV and other small luxuries, just for our pleasure. Flowers sometimes, or gifts for my wife and children.”

Everything changed brutally when conflict erupted in Syria in 2011. Families were torn apart, properties destroyed and once peaceful Ein el Tal camp was ravaged by war and left in ruins. “We didn’t want to leave the camp. Even during the most difficult days, I always made sure our fridge and fuel tanks were full, not only for us, but for our neighbours, as well. It was important to me that those around us had enough to get by,” Ma’rouf said.

Then one day in the spring of 2013, Hajj Ma’rouf’s family and neighbours were forced to leave the camp.  “It was a question of life and death. We didn’t have a choice, I’ll never forget that moment,” Nadira, Ma’rouf’s wife, recalled. “All that counted was making sure our children would survive.”

However, even in the face of displacement and brutal conflict, Ma’rouf and Nadira maintained a positive outlook and this spread to their family and friends. “The moment we left the camp, I was sure we would return. I was among the first people to come back in the summer of 2017. I found our home severely damaged and looted, but not beyond repair,” Hajj Ma’rouf said.

Hajj Ma’rouf poured all his energy and what was left of his savings into repairing the family home. Even the stroke that he suffered as he began rehabilitation work didn’t stop him. Now, their home stands tall again, a peaceful island in the middle of Ein el Tal camp, that is still marked by the scars of war. Hajj Ma’rouf‘s dream had once again become a reality. Two of his sons and their families now live with him in the family home. “My new dream – one that I hope will come true soon – is seeing other Palestine refugee families return to the camp. I want the UNRWA school to open again. We won’t give up and we’d like to thank UNRWA for all of their efforts to rehabilitate Ein el Tal camp.”

Many Palestine refugees - displaced multiple times by the conflict now in its tenth year - dream of returning to the camp, just like Hajj Ma’rouf and his family did. UNRWA is committed to the reestablishment of services in Ein el Tal refugee camp. The Agency’s current rehabilitation efforts include repair to the camp’s water infrastructure and environmental care and rubble removal. UNRWA thanks the Municipality of Aleppo and the International Committee of the Red Cross for their continued cooperation in the camp’s rehabilitation.