Home » Newsroom » Features » Camp No. 1 Marks the End of the 2013 EU Summer Fun Days
Back to Newsroom 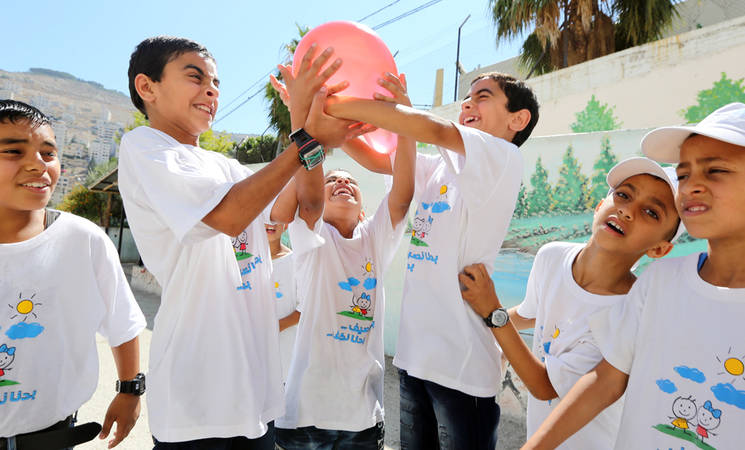 To mark the conclusion of the 2013 EU Fun Days, ten days during which United Nations Relief and Works Agency (UNRWA) students from across the West Bank came back to school for recreational and informational activities, Camp No. 1 Boys School hosted an open day on 4 July.

From 8 a.m. to 1 p.m., more than a hundred students came to take advantage of a diverse array of activities, including arts and crafts, computer studies and dance classes. “The students were so excited that many came as early as 7 a.m. to ensure their participation,” said Fatinah Abdul Janad, camp coordinator and mathematics teacher at Camp No. 1 Girls School. She continued, “We started off with 70 pupils, and the numbers had swelled to 120 by the end.”

Ninth-grade student Ayah Kharousha, 15, said, “I have been returning for the past ten days to learn to make beaded handicrafts. I am going to teach my mom and siblings what I’ve learned at camp!” She continued, “We also studied the geography of European countries and used what we learned to create 3-D maps naming each country’s capital.”

“I am sad for the end of the camp. I had a great time playing football with my friends,” said Mujahid Khalil, of the Camp No. 1 Boys School.

“We are serving approximately 10 per cent of UNRWA students in the West Bank,” said Mr. Wahid Jubran, deputy chief of the UNRWA Education programme in the West Bank. “We aim to attract as many youth as possible and provide alternative summer activities – it is either this camp or the streets for many of our students.” Priority for enrollment is given to new participants, and special consideration is given to students with disabilities.

The 2013 Summer Fun Days mark the third consecutive year that UNRWA, with the support of the European Union, has organized summer activities for Palestine refugee students. The programme gives children and young people of both genders an opportunity to relax and learn in a safe, secure environment during the summer.