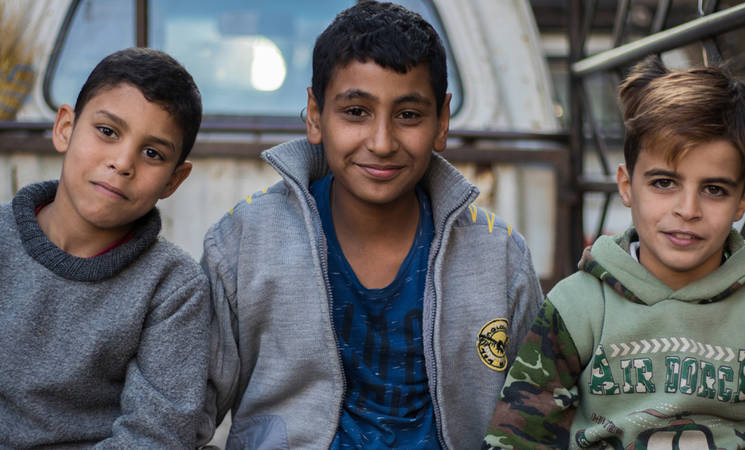 The 30th anniversary of the Convention on the Rights of the Child (CRC) is a good time to pause and reflect upon what the convention has meant for the protection of Palestine refugee* children who live in the occupied Palestinian territory today. When the CRC was adopted in 1989, children were promised that their rights would be protected, promoted, and respected. Thirty years ago, however, was also a date that marked the Israeli occupation entering its 22nd year while the first Intifada was raging, and Palestine refugees had already been displaced for over four decades. At the time, the CRC provided hope to Palestine refugee children: it spoke to them about their right to be safe in their homes, to go to school, to reach a doctor who could provide care, to enjoy opportunities to learn and to play, and to be protected in order to survive and to thrive.

Today, there are achievements to celebrate in terms of the rights of Palestine refugee children as provided for under the convention. UNRWA provides hundreds of thousands of children with high quality education services (including during times of crisis) and access to effective primary health services every day. Our schools incorporate a human-rights, conflict-resolution, and tolerance curriculum, unique in the region. Children have shown us their happiness, joy, achievement, resilience, hope, willingness to stand up, try again, push back, speak out, make change, and find a way to claim their rights. And there are, throughout the communities of Gaza and the West Bank, including East Jerusalem, many who stand alongside the children to realize their rights. There are youth groups, women’s groups, volunteers, local councils, NGOs, social services, INGOs, and UNRWA, whose incredible staff work in our 64 primary health clinics and our 370 schools across Palestine. In addition, our social workers, counsellors, protection officers, and volunteers provide vital support to the most vulnerable children.

While there is much to celebrate, we must also reflect on today’s real challenges and how the aspirations of the CRC have not been met for Palestine refugee children. Children born today in Palestine are brought up under the longest-standing military occupation in recent history, with little hope of an imminent political solution. If we want to speak of challenges to children’s rights, we have to speak not only of the occupation but of everyday violence, armed conflict in the Gaza Strip, Palestinian disunity, and protracted displacement. The human impact of these challenges should be at the forefront of our minds.

Imagine Amal, 16 years old and living in Dheisheh Camp. She is continuously worried about the next time Israeli soldiers will enter the camp: When will they arrive? Middle of the night? Just before dawn? Will there be tear gas, will there be shooting? Which children will be arrested, where will they be taken, who will protect their rights?

Mahmoud, only ten years old, is fighting for his life in Gaza. Diagnosed with a serious illness that needs medicine, surgery, and special care. Can they keep the medicine cold at home? Is there enough fuel? The doctors he needs and the surgery he is waiting for are in East Jerusalem. When will his permit arrive so he can receive medical treatment beyond Gaza? Can his father travel with him? How long will they be allowed to stay outside Gaza? What will happen if there are more rockets fired from Gaza?

Regarding the West Bank, including East Jerusalem, pause a moment to consider the many children whose homes face demolition. Imagine Niwal, just nine years old, watching as the bulldozers park nearby, wondering whose house will be next. The demolitions are quick, everything destroyed – the home, the belongings, the sense of security.

And we should reflect on Ahmed, in Beit Hanoun, near the fence that separates the Gaza Strip from Israel. He is 15 years old but has long since dropped out of school. His family asks why he should study. For what job? He is scraping by, like his brother and his uncles. It’s hot out in the sun. The farm needs constant attention or there will be nothing to harvest. But it’s dangerous working near the fence. The soldiers are always ready, with a warning shot or something more. It’s hard to see the future getting better. When is the next demonstration at the fence? Who will hear his voice?

Thirteen UNRWA students have been killed and more than 375 have been injured by Israeli Security Forces during demonstrations at the Gaza fence as part of the so-called Great March of Return. West Bank refugee camps witness on average 650 security operations a year, many of these operations develop into violent incursions involving the use of live-fire ammunition. This year has already seen approximately 100 Palestine refugee children displaced as a result of home demolitions in the West Bank, including East Jerusalem. As these statistics and the stories above make clear, child rights are far from being protected and fulfilled in line with the CRC.

The CRC was a promise the world made to children. Every right, for every child. No exceptions. This is not about geography, about checkpoints, or closed military zones, access restricted areas, or the Green Line. The CRC does not mention fences or walls. The convention is a promise to children everywhere – Amal and Niwal, Ahmed and Mahmoud. And the rights of the convention have duty bearers who must bear their responsibilities and hold accountable those who violate children’s rights. They must respect the fact that rights are not privileges that can be granted and withheld.

On this 30th anniversary of the CRC, we, as UNRWA, must also speak of the more than 70 years that Palestine refugees have been waiting for a just and lasting solution to their plight. While the prospect of a political solution appears more distant than ever, the CRC tells children: “These are your rights, you don’t have to wait.”

This message is vital for children to hear when they are raised during a time when there is so much waiting: waiting for political negotiations, for the conflict to be resolved, for the blockade to be lifted, for the occupation to end, and most importantly, for a just and lasting solution to their plight. The CRC is worth celebrating because it reminds Palestine refugee children that they do not have to wait for the right time or the right place to claim their rights. And the CRC reminds all of us to do what we can to fulfill the CRC’s promise. For Palestine refugee children that means pushing for the changes that are needed to make child rights a reality today.