Home » Newsroom » Features » Denied a human standard of living: The Gaza blockade has entered its tenth year
Back to Newsroom

Denied a human standard of living: The Gaza blockade has entered its tenth year 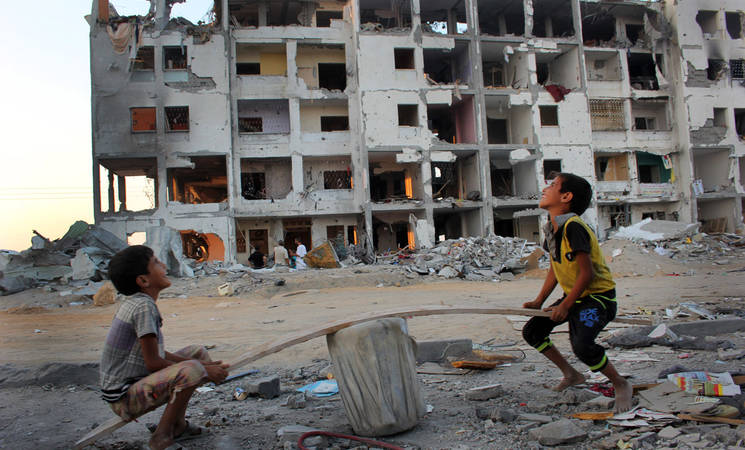 “I have survived the past three wars, but that is not the problem. In this place, wars come and go. The bigger struggle is not to lose hope. The only way I can do that is to retreat, and create my own world, and become oblivious.” This was told to me by 36-year old Ali, who works as a waiter in one of the coffee shops in Gaza city.

Ali was born in Gaza and for almost ten years has been living under a tight blockade on air, land and sea, entering its tenth year in June 2016. The blockade keeps him and the rest of the 1.8 million people of Gaza isolated and locked into a tiny 365 square kilometres-enclave - the Gaza Strip has one of the highest population densities in the world - tormented by extreme poverty and dilapidated by repeated conflicts.

Chronic fuel and electricity shortages, with power cuts between 18 and 22 hours per day, extreme water pollution  - 95 per cent of the Gaza groundwater is undrinkable - and devastated infrastructure, as a dire reminder of repeated cycles of armed violence, are the daily reality. Gaza’s people are denied a human standard of living. This was not always the case: before the imposition of restrictions on movements of people and goods, the Gaza Strip was a relatively developed society with a productive base and a thriving economy.

Blockade and occupation have reversed this process, accelerated by repeated Israeli military operations and widespread destruction, and today Gaza is subject to what the UN calls de-development. Located at the Mediterranean Sea between Egypt and Israel, Gaza could be famous for its palm trees, fruits and white beaches. Instead, it is known for a sewage and hygiene crisis titled by the Time magazine a “ticking global-health time bomb”.

UNRWA not only frequently spoke out against the disastrous impact of recurrent conflicts in Gaza, but has also - along with the UN at the highest level - repeatedly condemned the rockets launched from the enclave. We are disturbed by all risks to loss of life. At the same time we believe that the current, and increasing, restrictions on the movement of people and goods may in a very significant manner lead to exactly the opposite result of their stated reasons to enhance security in Israel. The severe restrictions represent a potential risk for increased frustration, violence and radicalisation, and could even be the trigger for another devastating conflict in the Gaza Strip.

The repeated warnings will become reality

The UN has issued repeated warnings about the unsettling and serious conditions prevailing in the tiny enclave; we warned already four years ago that the Gaza Strip will become unliveable – meaning that there will effectively not be enough resources for people to survive – by 2020. This is in less than four years. These warnings have been repeated ever since. If no fundamental and immediate action is taken to address the underlying causes of conflict such as the blockade which must be fully lifted, they will become reality; the catastrophe will not be looming on the horizon anymore.

When a place becomes unliveable, people move. This is the case for environmental disasters such as droughts, or for conflicts, such as in Syria.

Yet this last resort is denied to the people in Gaza. They cannot move beyond their 365 square kilometres territory. They cannot escape, not the devastating poverty or the fear of another conflict. Its highly educated youth - almost 50 per cent of the population are below 17 years of age - do not have the option to travel, to seek education outside Gaza, or to find work, anywhere else beyond the perimeter fence and the two tightly-controlled border-checkpoints in the north and south of the Gaza Strip.

With the Rafah crossing between Egypt and Gaza almost entirely closed except for a few days per year, and with Israel often denying exit even for severe humanitarian cases or staff of international organizations, the vast majority of the people have no chance of getting one of the highly sought-after “permits”. They can also not leave across the sea without the risk of being arrested or shot at by the Israeli or Egyptian navies, and they cannot climb over the heavily guarded perimeter fence between Israel and Gaza without the same risks.

The blockade has effectively eroded what was left of a middle class, sending almost all of the population into aid-dependency and destitution. The unemployment rate in quarter two of 2016 stood at 41.7 per cent – not including heavy underemployment – and 80 per cent of the population are forced to rely on humanitarian assistance to be able to cover their very basic needs, such as food, but also basic education, basic health care, shelter, or even items such as blankets, mattress or a cooking stove. While UNRWA in 2000, before the blockade, provided food assistance to 80,000 beneficiaries, we support over 930,000 persons today – a 12-fold increase.

The compounded effects of the blockade have also had a less visible, but yet profound and palpable psychological impact on the people in Gaza. Whatever resilience people have left, it is being eroded with every day the blockade continues. The UNRWA Community Mental Health Programme has found that Palestine refugees in Gaza are experiencing increasingly higher levels of stress and distress. The reporting of suicide cases across the Gaza Strip, once unheard of but now becoming a regular occurrence, clearly suggest that the coping capacity of Palestinians is being exhausted.

Among Palestine refugee children, UNRWA estimates that a minimum of 30 per cent require some form of structured psychosocial intervention. Their most common symptoms are: nightmares, eating disorders, intense fear, bed wetting.

“Boredom is a key factor for the depression and hopelessness of the young people. They sit in the dark – literally because of the lack of electricity – and feel helpless. They think about their life and only see negative solutions. Gaza is full of ideas; there is so much creativity in this place.  But we don’t focus enough on our own ideas.  We focus on our aid-dependency. The blockade has also led to a blockade in the mind-set of people. Young people are retreating. Why should we try, if there is always and every time a big NO to everything?” summarised Rana Quffa, a youth community leader from Gaza’s Middle Area, the feelings that engulf Gaza’s youth to me.” Life in Gaza is a vicious cycle. Who will help us break it?” she also asked.