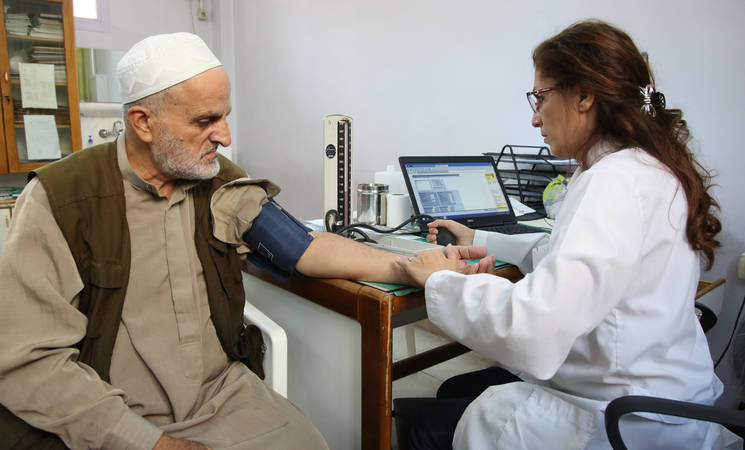 Once a successful business owner, Abdallah Mohammed lived surrounded by his family in Yarmouk refugee camp. Conflict has ravaged Syria in recent years and Abdallah lost his home, shops and family as a result of the unrest. At the age of 68, Abdallah is now scrambling to find a job to support himself. During these dark times, UNRWA has been a steady source of sustenance.

Like thousands of Palestine refugees, Abdallah was the proud owner of two shops in Yarmouk. He lived with his wife and their newly-married daughter and her husband, surrounded by laughter and love. After the start of clashes in 2012, the family made the decision to leave their home in the camp. Abdallah sent his wife and daughter to neighbouring Lebanon. Along with his two sons, Abdallah fled to nearby Hajjar al-Aswad. They arrived with nothing than the clothes on their backs. “I told myself we wouldn’t stay longer than a few weeks, but the weeks turned into months and the months turned into years,” he says. His youngest son was shot dead by a sniper. He was just 32 years-old at the time. “My heart shattered,” he recalls, with tears running down his cheeks. Abdallah and his only surviving son continue to live under siege, often staving off hunger by eating grass. And no matter how much his heart aches for his wife and daughter, he is happy his wife and daughter have been spared this hardship.

Abdallah, who now lives in a small room in al-Zahira, recently returned to Yarmouk to visit his home and shops, which were largely destroyed in April 2018. “Most of the buildings are just mounds of rubble now.  I failed to recognize my home and my neighbourhood in all that rubble. I feel numb about it. It is heartbreaking to lose everything,” he says. At the start of the conflict Abdallah dreamt of returning to his home and his re-uniting with his family. Nowadays he is not sure what the future holds.

When Abdallah was able to escape the besieged area of Hajjar al-Aswad, he was hit with severe depression. He visited an UNRWA health clinic and was provided anti-depressants to manage the symptoms of depression. Today, he says he knows how to cope, despite missing his family dearly. “The doctors really helped me address my issues and are very supportive,” he says. Abdallah regularly visits the UNRWA health centre in Alliance to check his blood pressure. The Agency’s health services are vital for Palestine refugees and are provided thanks to the support of various donors, including the Government of Japan. Mental health support is now more important than ever with the conflict having entered its eighth year.

With UNRWA support, Abdallah tries to keep his spirits up, telling his wife and daughter that he is fine on his almost daily calls to Lebanon. “Loneliness is hard. You cannot imagine how hard it is. I wish I could see them,” he sighs. He has not seen his wife for six years. Travel to Lebanon is impossible due to travel restrictions. “I cannot wait to kiss and hug my eight-year-old granddaughter. She was only a few months old when she left for Lebanon,” he says. “The hope of meeting my family one day strengthens my resilience and provides me with courage.”