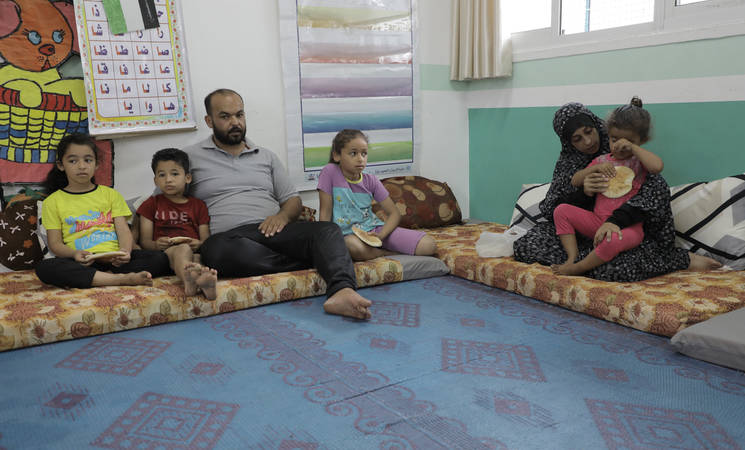 Yaffa is a 33-year-old displaced Palestine refugee in Gaza. During recent airstrikes that left harrowing human costs in its wake, Yaffa found shelter at the UNRWA Abu Hussein School.  “My family and I spent the first day of Eid al Fitr (a day of celebration marking the end of the holy month of Ramadan) in a shelter. My house and the rest of the homes in the neighborhood were pulverized by the indiscriminate and intense bombings.”

“My four children and I ran for more than one kilometer to reach a shelter, away from the brutal bombings. I’m nine months pregnant! I was so terrified that night; it was like a horror movie. I didn’t think that I’d survive the night,” Yaffa recalled. Fifty-eight Agency schools-turned shelters provided emergency refuge to more than 66,000 Gazans during Israel’s eleven-day offensive on the besieged Strip. 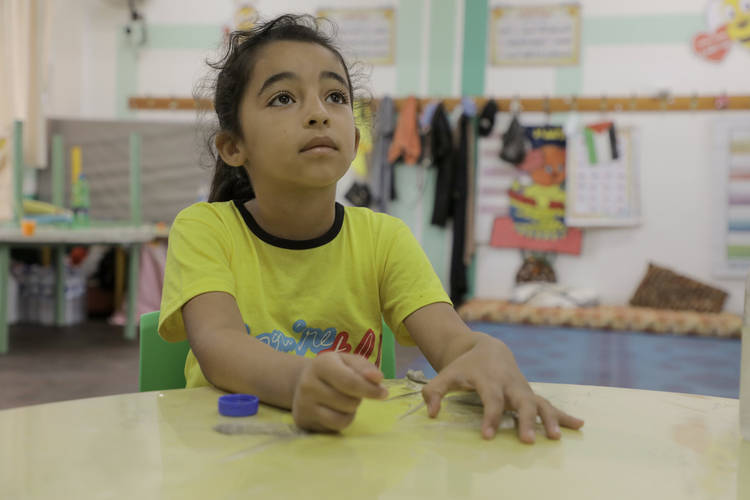 Maya8, has been displaced after her home was one of thousands destroyed by the recent assault on the Gaza Strip. She is currently sheltering in the UNRWA Jabalia Preparatory Girls’ “A” School. © 2021 UNRWA Photo by Abdallah Hallaq

“In our rush to escape the airstrikes, I lost my eight-year-old Maya,” Yaffa painfully recounts. “We spent the rest of the night looking for her! We found her in the Al-Tawam area of north Gaza. She’d been picked up by an ambulance transporting two dead bodies. When I found her, she was in shock and was unable to speak. I later found out that seeing the bodies of the deceased up close had terrified her. Maya told me that blood was everywhere,” Yaffa said.

“UNRWA provide us with shelter, protection services and food. They even brought clothes for the children because we were able to gather anything before we fled.  We’ve also received health care services. I’ve received regular check-ins, including inquiries about my health and due date.” Yaffa noted.

“When the war was over and a ceasefire declared, we went back to our home.  It was completely levelled to the ground. Then, my children started crying. Maya said that all her toys were dead like the bodies in the ambulance. My children were asking me all the time to go back to the school, fearing that the bombing would happen again,” she said.

“I’ve started to get contractions and expect to go into labour in a few days. I don’t know how I’ll be able to prepare myself or the baby for our reality. I hope we’ll be able to return to a safe and stable home soon. We don’t want to be displaced anymore,” Yaffa concluded.

UNRWA Calls for Fair Distribution of Life-Saving COVID-19 Vaccines and Supports Vaccination Effort of Palestine Refugees
Back to School: Karam’s Journey of Reintegration
Recollections from emergency – Ramadan’s story
The Neutrality and Inviolability of UNRWA Installations Must be Respected at All Times
West Bank - Situational report #3 - 21-24 May 2021
West Bank - Situational report #2 - 20 May 2021
gaza: 21 May 2021 – Situation update #10