Farmer's income stuck on the "other" side of the Barrier 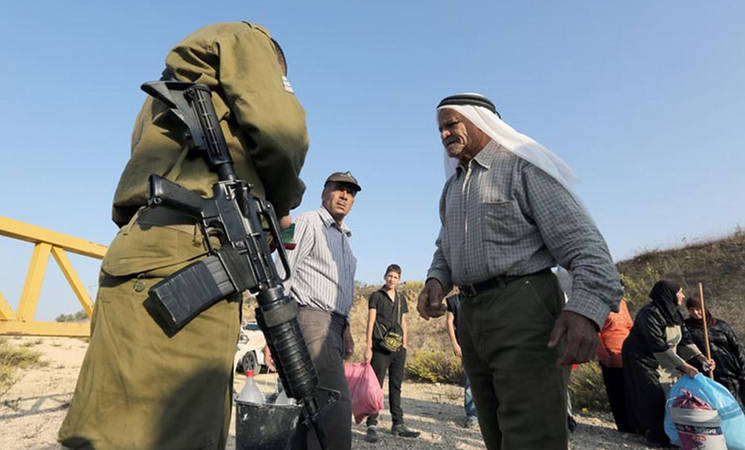 “75,000 shekels a year", recalled Abu Hatem. "That‘s how much money my family used to make selling 15 tonnes of grapes during the harvest season.” The amount is roughly equivalent to USD 20,000.

Abu Hatem, 73, is one of many farmers from the Palestinian town of Beit Ijza, located ten kilometres northwest of Jerusalem, in the West Bank.

Beit Ijza is part of the “Biddu enclave”, a cluster of eight Palestinian communities (approximately 30,000 people) surrounded by Israel’s West Bank Barrier on three sides and by the restricted Highway 443 on the fourth.

Abu Hatem owns 40 dunums of land, planted with olive, grape, almond, fig, and peach trees, as well as various field crops on the “other side” of the Barrier: the ten per cent of the West Bank sandwiched between the Israeli-built Barrier and the 1949 Armistice Line (Green Line), which Israel has declared a “Seam Zone”. Palestinian farmers can only reach their land in the Seam Zone via one of 80 agricultural gates installed by Israel along the Barrier.

In Beit Ijza, Abu Hatem’s name is on a list that gives him access to his land when the Israelis open one of these gates. Unfortunately, the number of “opening days” is not nearly enough for him and other farmers to care for their land – 97 days in 2009, 83 days in 2010, and 37 days in 2011.

“In January and February, we plough the land, and in March, we prune the plants. Between April and June we have to spray the plants for insects. Then we monitor them until it becomes time to pick the fruit; it is a year-long process.”

During the 2010 and 2011 harvest seasons, the gates were kept closed in August and September; as a result, the farmers of Beit Ijza and Biddu were unable to harvest any grapes at all in the Seam Zone. This caused a catastrophic loss of income.

In 2012, the gates were opened in August and September but were left closed during earlier months, preventing farmers from taking proper care of their grapes. In Abu Hatem‘s case, this year‘s access restrictions resulted in the loss of all but two tonnes of his grapes, which were fed to his animals as they were not fit for selling.

For Palestinian communities living near the Barrier such as those in the Biddu enclave, the confiscation and loss of free access to agricultural lands have a direct impact on the economic well-being of people like Abu Hatem. Israel’s policy of limited and unpredictable openings of agricultural gates undermines the livelihoods of Palestinians living in the area.