Home » Newsroom » Features » Gaining space and self-esteem: UNRWA empowers women in Gaza through social and recreational activities
Back to Newsroom 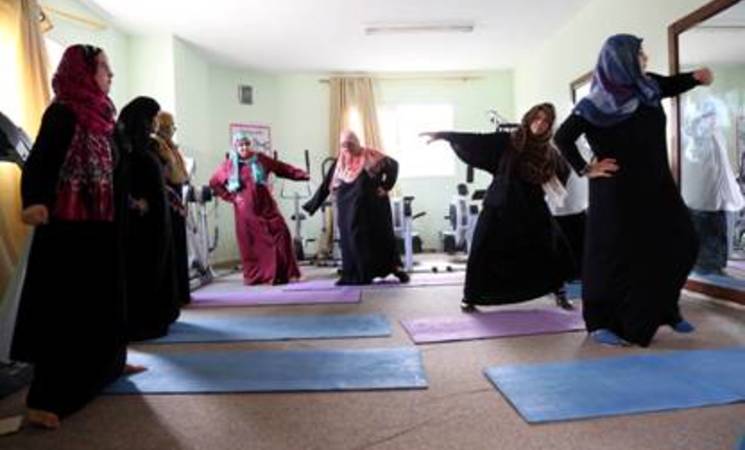 Every week in the calm, early Saturday morning hours, a group of women gather in front of the Rawafed Association in Deir El-Balah, central Gaza, preparing themselves for their weekly ‘power walking’ session.

“We all meet up at 7 a.m. in the morning and then start walking for two hours, mostly through the neighbourhood and then along the beach,” commented 47-year-old Hanan Ahmad.

Walking around the neighbourhood may be a normal activity for women in other countries, yet in remote communities in Gaza, seeing women engage in sports activities in public is quite unusual.

“In the beginning, my family opposed me walking around the neighbourhood. However, when they learned that sports activities are also encouraged by UNRWA, they changed their mind. The community has a lot of trust in UNRWA and my family started to support my wish,” explained Mariam Abu Omra, who actively partakes in the exercise sessions.

Mariam and Hanan are two of the dozens of refugee women who regularly visit the Rawafed Association, a community-based organization in Deir El-Balah that has been supported by the UNRWA Gender Initiative (GI) since 2008 through their ‘Social and Recreational Spaces’ (SRS) project. This project aims to provide women and girls with safe spaces in which they can socialize and access recreational and social activities, in order to promote women’s rights to equal participation in public life.

In total, the GI supports SRS activities in 27 community-based organizations (CBOs) across the Gaza Strip, including Arabic and English literacy classes – with mobile literacy units for 90 women in marginalized areas – arts and drama workshops, book clubs, and physical health activities for psychosocial purposes.

While sports and recreational activities are no direct panacea for the eradication of poverty, hunger, child mortality or disease, the United Nations recognizes them as powerful tools in the advancement of development and peace objectives. By providing women with such spaces, opportunities and programmes, the GI effectively empowers women to take on a more self-confident and proactive role in the community.

“Since I’ve started participating in sports, I have more energy. It is all about organizing time. I do all my household chores quickly so that I can come here and do sports and then I return home quickly and do homework with the children,” commented 47-year-old Hanan Ahmad on her tight schedule.

Many women feel empowered by doing activities outside their home, establishing networks, participating in public life and taking matters into their own hands. “Before I did sports, I felt like I only had time to be there for my family. Now I feel that I have more power and energy. For example, I want to start giving classes to teach children,” said Hanan.

While the women in Deir El-Balah have discovered sports activities as a way to gain space and self-esteem, a group of women in Beit Hanoun, northern Gaza, gained self-confidence through drama classes at al-Atta’a CBO, which is also supported by the UNRWA Gender Initiative.

At the beginning, the community in Beit Hanoun was sceptical about the CBO activities, but today the drama classes are very popular among the women in the area, offering them a chance to learn how to express themselves, how to articulate their thoughts and develop arguments, and how to engage in a discussion. “Many women talk about their own experiences during the drama classes; they learn how to tell their own story,” explained Samaher al-Masri, the officer in charge of al-Atta’a CBO.

“I often felt weak and lacked confidence; here at the CBO, I gained self-esteem, learned how to be independent and live my own life. Now I am strong and can say what I need,” said Zeinab Difallah, a regular visitor to the CBO.

In 2014, the SRS reached out to approximately 14,000 beneficiaries, including 38 women with disabilities.

The SRS is one of the five pillars of the UNRWA Gender Initiative Equality in Action programme, implemented in 2008, which provides women and girls with unique opportunities for capacity-building and is generously supported by the Norwegian Government. The other pillars are educational support, women’s economic empowerment, capacity-building for CBOs, and combating violence against women. To date, approximately 115,000 beneficiaries have benefited from this programme. 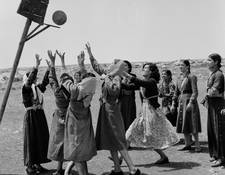