Gazan women living through crisis share their art with the world 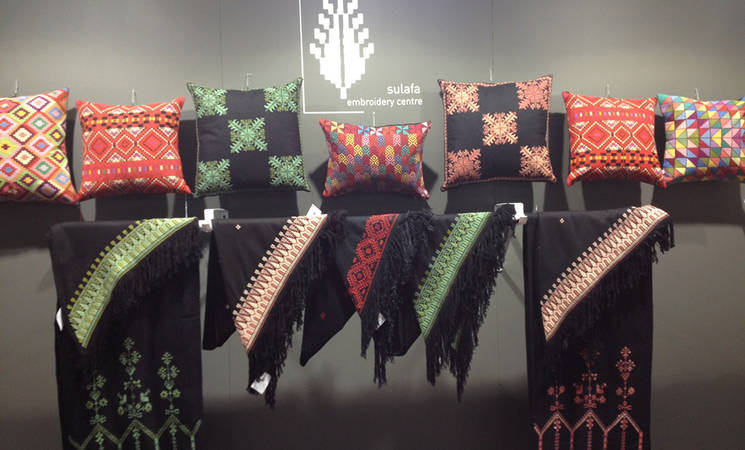 As the people of Gaza struggle to cope in the midst of a humanitarian emergency, women are using their talent and creativity to bring much needed income to their families, while at the same time sharing traditional Palestinian art with the wider world.

The Sulafa Embroidery Project was established in 1950 in Gaza to produce embroidered goods for sale locally and internationally. Several hundred women receive orders through the organisation. They are provided with materials and training through local women's centres, before completing their work at home.

This year was shaping to be a landmark year for Sulafa. With support from an international design consultant, the embroiderers were working on a new product line for the prestigious New York International Gift Fair on August 16-19. With support from UNRWA, Sulafa embroidery supervisor Sumayya Abu Auda had received a special permit to leave the sealed-off Gaza Strip to attend the New York trade show.

But before the samples could be completed, Sulafa operations were suspended by the conflict. The organisation’s shop, located within an UNRWA school complex in Gaza City, was turned into an emergency shelter. The military escalation also meant Ms. Abu Auda could not leave the Gaza Strip, as the only functioning border crossing with Israel was closed even for the lucky few with special permits.

“Losing the opportunity to travel to New York for the trade show made me so sad,” Ms. Abu Auda said. “We worked so hard to prepare for the event to represent all the women from Gaza who worked tirelessly to promote our Sulafa Embroidery project. For us from Gaza, participating in a New York show was a unique opportunity.”

The Poverty Alleviation Fund, a small donor with a long relationship with Sulafa, stepped in to salvage the opportunity. Moving quickly during a temporary ceasefire, Ms. Abu Auda slipped into the Sulafa shop and brought all the available samples to an international UNRWA staff member who was due to travel home. “I was determined to support my colleague, who travelled instead of me,” she explained. “Despite mourning one of my relatives, who lost his life in the war, I went to Sulafa with my 21-year-old daughter, who helped me collect the samples for New York.”

The UNRWA staff member carried the samples by hand to New York, where the Poverty Alleviation Fund and a network of supporters conceived a simple, striking display, which they staffed throughout the show.

The market response to the Sulafa presentation exceeded expectations. Sulafa earned commercial sales, orders, enquiries about doing business in Gaza, and further offers of representation at industry events through the autumn.
Now, Sulafa is preparing to emerge from the recent conflict with a presence in a new market and more employment opportunities for Palestine refugee women.

“I pray for peace, safety and a dignified life for the people of Gaza and for these women whose products were displayed in New York. God only knows how many of them lost their houses, got injured or were killed,” Ms. Abu Auda concluded.