Home » Newsroom » Features » Guided by the light in her heart, Tala is determined to achieve her dreams
Back to Newsroom

Guided by the light in her heart, Tala is determined to achieve her dreams 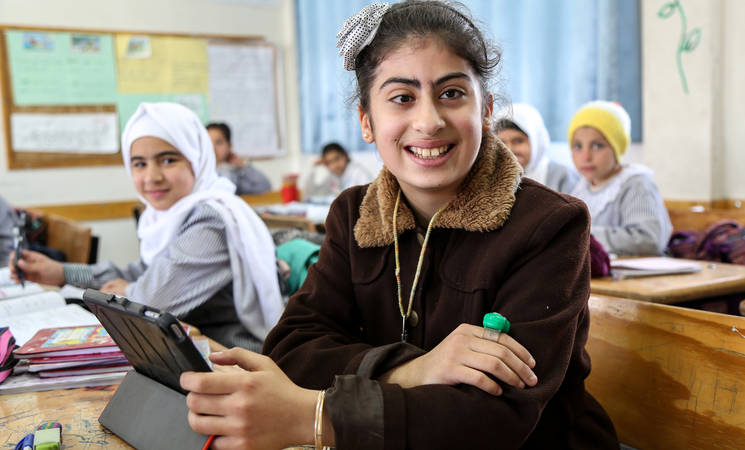 Sitting at the front of the classroom, 11-year-old Tala Al-Masri, is bright-eyed and attentive as she pursues her dream of an education at the UNRWA Zaytoun Elementary Co-Ed B School in Gaza. In spite of being born with a severe visual impairment, leaving her with little light in her eyes, Tala's passion for learning has been clear since she was a child. "Tala is one of the most active and wonderful students in the school,” her school principal Itaf Adel Hadi describes her.

Born at the onset of the stifling Gaza blockade as a Palestine refugee, Tala has been exposed to poverty, deprivations and isolation from an early age. Yet, in spite of the additional challenges presented by her disability, deep in her heart she knows education is her ticket to a bright future.

The full extent of her visual impairment only became confirmed once Tala started school and it was evident that her vision could not be improved with the aid of glasses: "I couldn’t clearly see the printed letters and words.  I could only read from very close-up, so the teacher helped me to learn how to read and write. The school also provided me with a rolling chair so that I could move closer to the board more easily.”

Thanks to the “Vision Project”, which successfully concluded in 2017, the school was able to provide to Tala all school textbooks digitally on a tablet so that she could read and participate in a reading challenge.* “I was surprised last year when I was provided with a tablet modified for visually impaired persons. All the school books were downloaded on it and I can enlarge the printed text when I read.  I could also listen to the lessons in Arabic. All my school marks are high and I really like my school more now," says Tala about the additional support she has received from the school to facilitate her education.  Her school principal remarks, ““It is very important for us to effectively integrate her in the school. As a school principal, I am very proud of her strong will and determination.”

While she may not be able to clearly make out the details of the objects around her, and sounds often overpower the images and colours, Tala’s dreams shine through in her words and bright smile: "I will someday become a maths teacher. I also love horses a lot, I imagine myself riding a horse in a green meadow. I know it's difficult to achieve this dream, but it will happen one day, and I am preparing myself for it,” she says with affection.

UNRWA Zaitoun Elementary co-ed school B is one of fourteen UNRWA schools adopted by the United Arab Emirates. This school adoption project allows some 15,170 Palestine refugee students to pursue their education, even within the challenging context of recurrent conflicts and a decade-long blockade in Gaza, ensuring that no child is left behind.